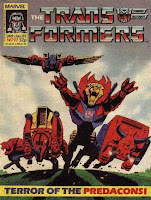 The 97th issue of the UK version of the Marvel Transformers book contained the second part of Prey by Simon Furman, which I began reviewing last week. The art duties switched to Jeff Anderson but Steve White continued to provide the colours and Annie Halfacree the lettering. Ian Rimmer edited.

The cover depicts the Predacons charging at the viewer in a very savage group. I love this image. It's considerably more successful than last week's and is just a dynamic, savage piece that showcases the attitude of the Predacons perfectly. The caption reads "TERROR OF THE PREDACONS!" which is redundant but at least placed low enough not to ruin the impact of the image. The little Transformer head next to the title has switched from Optimus Prime to Megatron, presumably to warn the readers that slag is about to get real. Unfortunately I cannot find out how drew this fantastic image. If anyone knows or has any theories, let us know!

We pick up a little while after the cliffhanger ending of Part 1. Prime has escaped the Predacons momentarily and is reflecting how bad his situation is. This might be seen as something of a cheat given just how surrounded Prime was but I don't begrudge Furman having his cake and eating it with a great cliff-hanger followed by this "in media res" opening. Besides, it's Optimus Prime, if anyone can do it, it's him.

It doesn't take the Predacons very long to catch up to Prime and Razorclaw and Rampage leap to attack. Prime responds by stunning Rampage and then landing on Razorclaw with a brutal curbstomp that shatters parts of his head and mane (although I'm sure he'll be fine by the next panel). Tantrum and Prime exchange a few insults before Prime transforms and tries to get away from the mechanical bull. I've always found the inclusion of a bovine alt-mode with a group of elite trackers to be rather strange but I suppose Decepticon understanding of Earth life-forms is not exactly complete.

(a metal rhino - another creature not known for it's relentless pursuit of prey). Luckily the ever-resourceful Autobot spots Divebomb circling overhead and, transforming back to robot mode at the last second, grabs the Predacon's undercarriage and hangs on long enough for the two charging beasts to collide head on, knocking each other out.

Prime now has breathing room and time to reflect on the irony of the situation. He planned to fake his own death originally and now may face it for real! This also serves the purpose of catching any readers up on what happened last issue as well as the intervening time I was wondering about earlier. It turns out that Megatron gave Prime a ten-minute head start in order to prolong the inevitable. Prime is just thinking to himself that if he survives for a bit longer Wheeljack will alert the Autobots when a colossal robot bursts out of the tree-line. The Predacons have combined to form Predaking!

Prime fights as best he can but is hopelessly overmatched. He is quicker, however, and runs to reach his trailer section to get whatever is inside. Unfortunately he is surprised by Megatron, who blasts the trailer. The script reminds us that Prime and his trailer are linked and he is stunned by the sudden pain. Razorclaw arrives (mane intact - see!) and it emerges that this was the plan all along. Megatron correctly predicted exactly where Prime would try to flee to, which is a nice bit of insight into how well these two know each other. Megatron quite often appears entirely insane in this era but he's still a deadly combatant and can be a shrewd tactician. He gives the order to the Predacons to finish the job. Before Razorclaw attacks he thinks about Shockwave's plan and if he should put it into practice after all. The editorial box-out says "see Part 1 for details" but Part 1 doesn't really give any more details beyond "Shockwave has a mysterious plan for advancement that involves the Predacons."

Without us finding out the resolution to Razorclaw's dilemma the Predacons leap, Prime shouts "NOOO!" and we cut to the Autobots, led by Wheeljack, still in a quandary about keeping up Prime's ruse. He surveys the devastation and is concerned that Prime seems to have gone to an awful lot of trouble to make his plan succeed. Suddenly the Autobots stop, in shock, when they discover, in a cliff-hanger shock final panel, Optimus Prime's shattered remains!

Like the previous issue, this is a mixture of some quite successful material and some that is... less good. The problem with this story is that it reads like a first draft. Perhaps Furman was under the gun for a deadline here but it reads like he had a great idea, "Prime gets chased by the Predacons and has to use his wits to survive" but couldn't quite work out how to get him into this situation. If the "Optimus Prime planned to fake his own death but did he die for real?" question was ever going to work it wasn't in this story. The ending is supposed to be ambiguous but it's hard to take seriously a cliff-hanger that Wheeljack can solve by walking over to the "corpse" and saying for sure whether it's really Prime.

There isn't a lot to say about the beginning of the issue. The action is fun and varied, if not exactly believable, and it's nice to see Optimus in "fighting for his life" mode instead of "staying back at base and fretting" mode.

This ending though... Shockwave's plan is not elaborated on in any way and because it's so obvious that this is not really Prime in pieces, the question of what has really happened to him because irritating rather than annoying, because the issue doesn't really go anywhere that could not have been reached pages earlier. It's almost as though Furman is over-thinking it. This entire setup could have been achieved (and the new combiner team suitably showcased) with a much simpler setup.

Furman's decision to leave the contents of Prime's trailer ambiguous is confusing and borderline insulting to the audience. Clearly the intention was to set up the shocking image on the last page but even the dullest reader would only express a simple "oh, so Prime was keeping a decoy version of himself in his trailer" and the rest of us would already have figured out that it couldn't be anything else.

In my personal readings of this story I have usually forgiven these last two issues because they go past quickly and set up a series of events that in general I like very much but when subjected to analysis they really miss the mark. Prime is wildly out of character and the second issue is essentially pointless because the ending does not work as a cliff-hanger. Considering I expect the next issue to really pick up in quality I hope I am not as disappointed in hindsight as I have been with Parts 1 and 2!

The art of Part 2, however, is a big step up over Part 1. Jeff Anderson draws the Transformers in a much more recognisable (to modern, or indeed, American, audiences) and his Megatron in particular is light-years ahead of Simpson's. I think the Predacons are some of the best looking Decepticons ever so it certainly doesn't hurt to have them front and centre. My only (very slight) gripe is that Anderson draws Optimus Prime's head slightly too large. It's almost human in it's proportions, whereas, of course, most Transformers have quite a bit smaller heads than a proportionally sized human would have. This has the effect of making Optimus appear smaller and less powerful than he should be.

Not a great issue then, not even a good one, but hey, it's only eleven pages. Hopefully Furman has something special for us next time!
Posted by Bishbot at 11:37 AM

I've no evidence to back this up, but for me, the cover artist has to be Geoff Senior. If memory serves, he also drew the next issue.

It's got to be him, the cover has his distinctive style.

the image most definitely Geoff Senior, I'd know his style anywhere.

You could well be right. It's not coloured in the same way Senior's art usually was so I don't know for sure, but he certainly seems the most likely candidate, looking at it. I wish I had a bigger version of it, and yes, Senior did draw the next issue.

What bugs me about the issues, in addition to what Bish listed above, is that a VERY similar plot would unfold in just a few issues in the US. Since there's no effort to play up the symmetry, it makes the whole tapestry feel redundant. Not exactly Simon's fault, but very unfortunate nonetheless.

(I know that a bit of dialog was changed to justify Megatron not knowing about the Predacons, but it was at best a bandage.)

Definitely Geoff Senior. If I remember correctly the credit is on the inside cover, right hand side. Great image, I'd love a remastered version of this.