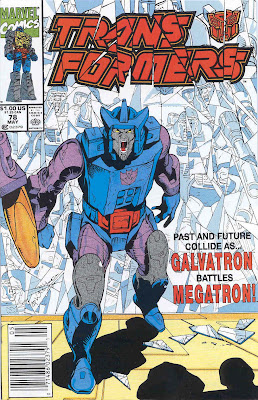 The seventy-eighth issue of the US G1 Marvel Comics run of Transformers is titled A Savage Circle.  The creative lineup remains the same, giving us another Furman / Wildman / Baskerville / Parker / Yomtov collaboration.  Editors Rob Tokar and Tom DeFalco are listed as 'Drifting Aimlessly', accompanying an image of Megatron's corpse floating in space.  Ah, but I get ahead of myself.  The cover, too, is a collaboration between Wildman, Baskerville, Yomtov, and Parker.

Why did I list out the letterer on the cover, you may be wondering?  Well, at BotCon '98, Rob Tokar told the story behind this cover.  Wildman drew it up, and then sent it off to Parker to add in both the words ('Past and future collide as... GALVATRON battles MEGATRON!') and the logo.  Parker, entirely of his own initiative, copied the Transformers logo and then sliced it up, matching the aesthetic that Wildman had drawn up.  Everyone on the team was very proud of the cover, and rightfully so, so they were surprised when Hasbro came back and said that the logo was unacceptable.  Tokar went to bat and fought for the cover, and Hasbro decided that it really wasn't going to damage their brand so they let it through.  Kudos to Tokar for fighting for his creators, and to Hasbro for a very reasonable decision.  I can see why their first reaction might be to say no, but I'm glad that upon reflection they relented.  It's a fantastic cover, neatly summing up the core conflict in the book visually.  I love Megatron's presence here, as a shadow and a shattered reflection but not actually in frame himself.  Galvatron's had to deal with the specter of Megatron for his whole existence, and this cover perfectly captures that symbolic reality.  This, along with the cover to issue #5, is my favorite cover in the G1 run.  I'm incredibly proud to own the original artwork to it. 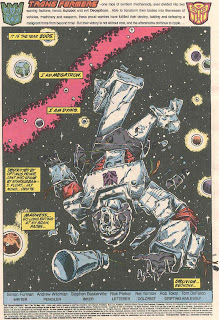 The issue itself is quite strong, though perhaps not quite as brilliant as the cover.  We open on a two-page flashback showing the origins of Galvatron, matching up with what we saw in the movie.   I love Wildman's retelling of this familiar scene, especially the aforementioned bit of Megatron drifting aimlessly.  Once this necessary exposition is out of the way, we cut back to a second after issue #77 left off, with Galvatron belting Megatron.  Galvatron seeks to break the savage circle of his own fate by destroying Megatron. Megatron himself isn't quite right in the head, still tormented by his experiences with Ratchet.  The delusional Decepticon sees his foe not as he is, but as Ratchet.  They approach battle with an almost gleeful rage; it's what they know, all they know.  The idea of dealing with your psychological issues through combat is so delightfully comic-booky that I can't fault it for its logical absurdity, though there's more to the story that I'll get to in a bit.  Megatron's hallucinations tie back into the more insane version of the character that we saw back in issue #25, and I rather like how Megatron hallucinates not Optimus Prime, his supposed nemesis, but Ratchet, who at least in this continuity has a better claim in the spot.

There are, of course, other events going on in the universe.  Bludgeon randomly stabs his sword into a starchart and locates Klo, a peaceful world with abundant natural resources and a decent level of technology.  In other words, a perfect target.  He gloats about how foolish the Autobots were to think that the Decepticons would colonize an empty planet, happy to let them rot with the dying Cybertron.  On said planet, Prowl despairs that he's lead the Autobots into ruin, at least, until Grimlock shows up with some ancient stolen battle cruisers.  He's also taken care of tracking the Decepticons, proving that perhaps he does have what it takes to be an Autobot leader.  It's a bit hard to swallow, that Grimlock stole three Decepticon battle cruisers and saved them in the Rad Zone for millions of years, though I like the idea that he didn't trust the 'Cons, NEVER trusted the 'Cons. 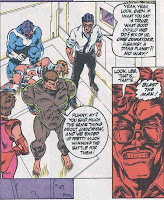 The Autobots load up and prepare to abandon the planet, though not everyone wants to go.  Hi-Q keeps insisting that he and Optimus Prime merged consciousness, and that they must save Cybertron by locating the Last Autobot.  Blackrock is skpetical, but Lee Gruber undercuts his authority and argues in favor of staying.  Blackrock's reaction is somewhat odd.  I wonder if Furman was trying to build up some tension here that for some future purpose.  After all, at the time he knew that Tranformers was canceled, but thought that the Neo Knights might have a future in the Marvel Universe.  Still, it plays pretty awkwardly here, especially the red-faced Blackrock.  (An earlier red-faced Galvatron works much better, though.)

Back to the main plot, though.  Galvatron, finally realizes the absurdity of what he's doing.  In a burst of clarity, he realizes that killing Megatron will definitely not cure him of his own insanity, but may actually cancel out his existence.  Thus, the comic convention is turned on its ear a bit, when one of the participants realizes how crazy it really is.  I rather like that turn of events. 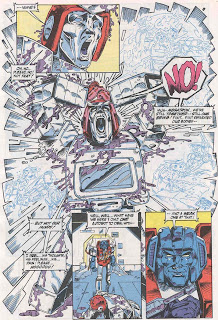 Starscream and Shockwave, meanwhile, have detect life signs, and it's Starscream who realizes (part of) what's happening.  Deactivated Autobots, coming back to life.  Sadly for them, they have to negotiate Earth orbit, delaying their response.  When they do get there, just after Galvatron ducks around a corner, Starscream takes one look at Megatron and starts to cower.  Shockwave is appropriately disgusted by this display and dispatches his ally to deal with any Autobots who have come online.  One has, of course; Ratchet.  Much to his horror, he sees through Megatron's eyes, their minds still linked.  Starscream's rapid transition from meek servant to angry bully is a highlight, as is the lovely flashback Ratchet experiences.  Wildman has a great handle not just on emotion and storytelling, but also on these odd time flashes.

Shockwave's vendetta against Megatron is interrupted by Galvatron, who plegdges to try to come to terms with Megatron.  Megatron senses a kinship with this future Decepticon, and they make a pact to rule the galaxy.  Ratchet senses this, and breaks the chain by diverting Starscream's weapon to the Nucleon.  The volitile fuel explodes, and just as the Ark crashed to Earth four million years prior, so it does again.  The savage circle has repeated itself.

The motif of these repeated battles is done very well.  The Ark, crashing to Earth twice to contain evil.  Starscream falling into old patterns at the site of Megatron.  Galvatron, unable to break out of his own Madness.  Prowl and Grimlock's familiar banter.  After 78 issues, we've seen much of this before, so revisiting it seems appropriate.  It also helps us get ready for the ending of the story, to remind us where things came from.  Appropriately, this episode moves several pieces off the board, with Starscream, Shockwave, Megatron, and Ratchet all meeting their ultimate fate, at least as far as this series is concerned.  Only Galvatron survives, but this is in turn to allow another character to finish out their storyline.

Next issue, The Last Autobot.  We've been alluding to that for a bit now, so it'll be interesting to see how he turns out.  A Savage Circle, no exclamation mark needed, is included in IDW's Classic Transformers Vol. 6

Another great issue, I loved this one and couldn't believe the fight between Megatron and Galvatron when I picked it up and browsed through it :)

I'm pretty sure Baskerville didn't ink this cover (Wildman usually did them by himself), but I do think Wildman did his best to imitate Baskerville's inking style :)