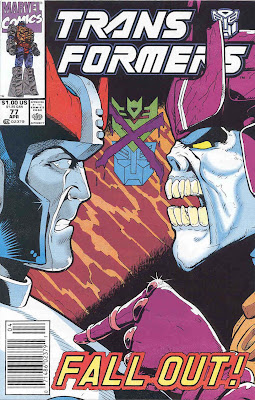 Exodus! is the seventy-seventh issue of the US G1 Marvel Comics run of Transformers.  The powerhouse creative team is unchanged, leaving Furman holding the writing reins, Wildman the artistic pencil, Baskerville the inker's pen, Yomtov the colorist's brush, and Parker the, letterer's, um... pen again I guess.  Editors Rob Tokar and Tom DeFalco are 'running scared.'    The cover is by Wildman.

The cover is very clever, on a number of levels.  Bludgeon angrily jabs a finger into Prowl's chest as they glower at each other.  The Decepticon/Autobot alliance symbol is in the background, savagely crossed out  by graffiti.  "FALL OUT!" it declares.  The crest on Bludgeon's helmet interacts with the Transformers logo, giving the logo a certain amount of depth.  The background shading skews maroon for Prowl, black for Bludgeon.  The teeth on Bludgeon are exquisitely rendered, as is Prowl's scow.  (Try saying that three times fast.)  It's really technically quite nice, selling the idea of mounting tension between enemies-turned-allies about as well as a static image can.  Oh, and note Action Master Grimlock in the corner.  He won't be there long, now, will he?

The issue itself more than lives up to the promise of the cover.  We open at the base, buffeted by the rapidly decaying environment.   Dreadwind and Darkwing, who Furman always seemed to love, run across the windswept plain, bringing the reader up to speed with their complaining.  The symbolism could hardly be more clear when the Autobot symbol on the base breaks loose from its anchor and lands on poor Dreadwind.  Inside the base, Prowl is desperately trying to hold things together, giving a report to the assembled Autobots and Decepticons.  Things quickly go bad when Fangry mouths off and Grimlock clocks him with a can of oil.  Only Bludgeon's swiftly-drawn blade prevents a brawl.  Blaster tells them what everyone has come to suspect; bereft of Primus, Cybertron is dying.  The Transformers have no choice but to abandon their homeworld.  The tension is palpable, with Wildman's artwork allowing for expressive body language all around.  Also lovely is the expression on Fangry's face when Bludgeon restrains his fury. 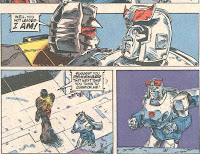 After a brief interlude, we cut to the spaceport, where the exodus is beginning.  Prowl begs Grimlock to give a speech to the nervous Autobots, imploring him to think of their morale.  Grimlock declines to do so, telling Prowl to give it himself if he's so inclined.  Prowl ejaculates that it's not his job, that Prime named Grimlock leader, which is of course the real heart of the problem.  Grimlock, the tactless bore that he is, calls Prowl on it and walks away.  This exchange could almost be between Megatron and Starscream, it was so angry.  Though, if it involved Decepticons, blows if not blasts would probably have been exchanged.  I love how impotent Prowl is in the end.

Perhaps seeking a target to vent his frustration on, Grimlock goes and picks a fight with Fangry, punching him through a window and interrupting some sinister plotting on the part of Krok and Bludgeon.    Fangry's had it, and we get a nice fight.  The banter is nicely witty, when Grimlock dismisses Fangry's compressed air cannon as just another 'Con full of hot air.  Grimlock bests him, then prepares to hit him while he's down, much to the delight of Bludgeon and Krok.  He's making their betrayal that much easier.  When Prowl intervenes, they're frustrated, but Bludgeon takes the opportunity to learn the specific details of Prowl's plan.  He's only been leader for two issues, and already I love Bludgeon.

Cut to the humans, being loaded onto a ship in a box of cargo by an uncaring (and miscolored) Quake.  Despite their help during the battle, they're thought of by pretty much both sides as just so much baggage.  Poor Josie is catatonic, drooling all over herself, and she's not the only one with mental problems.  Hi-Q seems to think that he's Optimus Prime, and is begging for someone, anyone to listen to him.  The Autobots are wrong about Cybertron, he asserts.  Lunacy or foreshadowing?

Back to the main action, the Decepticon contingent blasts off first, perhaps as some kind of peace offering for Grimlock's battle with Fangry.  Prowl fears that the information he shared with Bludgeon will be misused, and looks to Grimlock for reassurance.  Grimlock gives him none, though he does seem to have a plan of some sort in place based on his quick exchange with Snarl.  Prowl was right to be worried, Bludgeon calls Prowl's plan, of Cyberforming a new world and starting from scratch, weak and ill befitting the Decepticon way.  They'd rather start over the easy way, conquering some other world that's already build up some nice juicy infrastructure.  The 'Cons are more than happy when Bludgeon reveals that the Autobot ships have been sabotaged, stranding them on a dying planet.  It's a pretty fast transition, peace to war, but then by this point Furman knew he had only until issue eighty to wrap things up.  Besides, peace can only last so long in a medium like comics.  I also have a problem with the brilliantly logistical Prowl allowing all the Decepticons off Cybertron first.  It's a clumsy device, necessary to make Grimlock look good but at the cost of Prowl's character integrity. 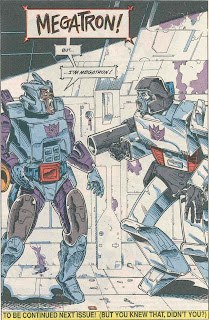 The story isn't quite over yet, though.  Remember the interlude I mentioned earlier?  The Autobot/Decepticon alliance wasn't the only group looking to flee Cybertron.  Shockwave and Starscream, having completed their repairs on the Ark, prepare to blast off.  Ever the systematic robot, Shockwave insists on a system's check first, though he poo-poos the idea of looking in on the life support bay.  Oh, foolish Shockwave.  The issue ends with Galvatron, who has stowed away on the Ark, preparing to dispatch the troublesome duo.  However, he runs into an unexpected presence... none other than Megatron, who we learn IS Galvatron.  More foreshadowing here would have been nice; I think we'd assumed that Galvatron had the same origin in the comics as he did in the Movie, but some other hint of this earlier would have made this great ending even better.  Still, it's intriguing to think of the pair of them meeting up, a terrific ending to a terrific issue.

A lot is packed into this, a mostly transitional piece.  We move from an alliance of Autobots and Decepticons back to the age-old status quo of warring factions.  Grimlock's leadership style becomes more apparent, somewhat more intelligent but no less abrasive than his last disastrous tenure.  Bludgeon, meanwhile, is as smooth as silk, and rapidly becoming one of the brighter stars among the many Decepticon leaders.  He knows when to use words and when to use arms to control his men. 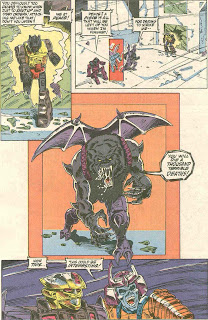 The artwork, as well, is extremely strong.  Wildman not only knows how to render an emotive and dynamic robot, but also how to work the panels.  I love how well the action flows when he's telling the story, and the many details details like Fangry's saliva or the shattered glass by Grimlock's feet.  Grimlock sure looks like the sheriff, coming to clean up the town, whereas Fangry has absolutely no control.  Nice lettering too.

"To be continued next issue! (But you knew that, didn't you?)"  Yup, we sure did.  Exodus is part of IDW's  Classic Transformers Vol. 6

and you should buy it if you haven't read the story yet.  Sorry for the month-long wait between reviews, I'll try to keep up with them now that I'm back from my NYC Christmas vacation.
Posted by Jimtron at 6:49 PM