Review: War of the Worlds, the series ep 40 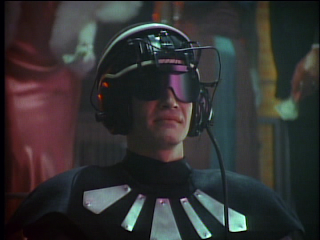 The fortieth episode of War of the Worlds, the series, is titled Totally Real.  The aliens use a completely immersive virtual reality fight simulation (ending in death) to probe human creativity and unpredictability, and for some reason they choose to do so in full view of human bettors and spectators.  Hey, whatever floats their boat, I guess.  Things get weird when Debi is snatched away from a career fair to participate in the game, prompting the team to go on the offensive.  They infiltrate the club, shoot up the place, and slip Kincaid into the Totally Real game.  He gets taken out (by lightning!) but Debi's mastery of the VR environment saves the day.

The Good: Hmmm.  Well, once again, it's a lackluster episode, though there are some nice details here and there.  The alien probe device, brought down last episode, factors in here.  The transmitting / receiving mechanism is replicated, and can allow the team to see through the eyes of another.  It's neat continuity, although structurally the ability doesn't integrate well into the plot.  Since it doesn't show up again, it seems like a lot of work to go to for not a lot of payoff.  (Oi, and this is something I liked!) 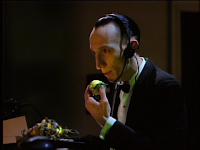 Ardix is great, as usual.  Oh, and he looks smashing in a tux. (So does Kincaid, I must say.)  Harrison even gets a POV shot of the alien murdering Nikita, the booker, through the magic of the alien probe technology.  (This scene is neat, but doesn't really justify the transmission / receiving tech in the first place.  I wonder if originally that's how Kincaid entered the virtual world?)

Scoggs shows up again, helping the team out.  She won't be in many more, sadly... 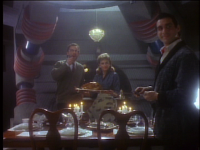 Debi's bizarre vision of some kind of idylic 1950's family was kind of neat.  The actors seemed to have fun, hamming this scene up.  It might have been nice to use this as an excuse to go back to the cottage, or even feature some bygone actors, but I suppose that would have been too much.

The Bad: A lot.  Once again, coincidence abound.  Debi is kidnapped, because she's the best at simulated games?  Ugh.  And the alien plot makes little sense.  I can accept that the simulated combat gives them valuable insight, but why the wagering?  Could it be that hard for them to procure their own test subjects that they need to rely on petty bookers?  If so, why not clone him and then get his organization working for them.  And career day?  Not really very 'Almost Tomorrow' if you ask me.  Sure, they made it more high-tech, but there's a weird 'life goes on' quality to the whole idea that doesn't resonate thematically with the stories told to date. 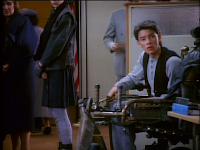 The brainy kid in a wheelchair felt very cliche.  I mean, we already had Norton, and now him?  It'd have been better to use one of the kids from Candle in the Night, just two episodes gone by.  Heck, we're mentioning the probe from there.  The steampunky wheelchair itself, though, is pretty cool. 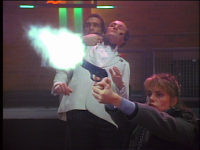 It's odd to watch Harrison and Suzanne fire at ordinary humans.  I don't think we've actually seen that before.  I suppose all the violence has desensitized them.  It does seem to be another line crossed, especially since at the time they did it they were completely unaware that the Morthren were involved in any way.  I'm not entirely sure this is bad, since I can readily accept it, but it's definitely jarring.  I'd have liked less time devoted to the POV weirdness and more time spent exploring this new milestone.  The actions I accept; it's the lack of consequences that bothers me.

A nitpick: Malzor and Mana using chess metaphors?  Do they play?  They seem to have such contempt for humans that this feels out of place.  Also, a lot of Malzor's dialog seemed to be narration or exposition, giving Forest less to do than usual.  I do think it's fun that the opening back-and-forth between Mana and Malzor occurs while she's examining a human brain, perhaps that of the human who fell to Sendac, the alien champion. 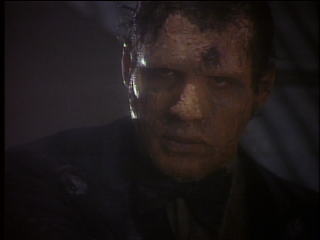 The Ugly:  Not a ton, really.  I guess the fake virtual Kincaid, a trick that Debi does not fall for.

Another weak episode, with a whole lot of work going on to get our heroes and our villains in the same room at the same time.  There is very little payoff here.  I'm absolutely not a Debi hater, but her as a video game prodigy seems like something out of left field.

is available on DVD for pretty cheap, and I've just started the last disk.  Just 3 more to go.  Fortunately, if memory serves, the last three edge up in quality at least a bit.
Posted by Jimtron at 1:26 PM

if i had to say something positive about this one, it'd have to be the surrealism of a few virtual reality scenes, namely the idyllic home life, which, as you said, would have been far better if they broke out of the limited scope of the production and filmed it in the Cottage set with characters of old like Debi's dad, Norton and Ironhorse...

otherwise... this one was just kind of embarrassing to watch. it's the episode of season 2 that i most want to NOT be caught watching by others ;-) the (re)use of the lazer tag guns, the mere fact that it was about VR gaming... the implausible public display... the poor video effects... and this is the only episode i find is obnoxious in how it focuses on Debi. i LIKE Debi just fine, but this one is totally forced in the way they involved her in a story. it's like this episode was marketed at Power Rangers audiences...

I think my favorite scene in this episode was Ardix (in his tux) running into the base, alerting the aliens to the collapse of the game. It's a pretty hilarious shot as Julian Richings very nearly knocks over a few Morthren scientists as he enters. Another example of why Ardix rules.

Otherwise, this episode was very "meh" for me.