Well, thanks to my good buddy Steve Mapes, who runs Transformers @ The Moon, I'm pleased to be able to share the extended Transformers Universe / Transformers A to Z (pronounced 'zed') bio for none other than Whirl.  When I mentioned that I'd lost the bio, he went through his archives and was able to dredge this up.  Now I don't feel like such a doof for saving over the file back in 2005. I'm moving Roadbuster's bio here from my earlier extended bios post, so the two Deluxe Autobots can hang together. 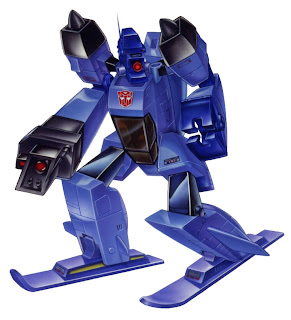 Whirl
Profile: Whirl is one Autobot who really loves his job. As a helicopter, he doesn't just fly, he careens across the sky in what appears to be a wild, joyful dance. But the crazy patterns he spins and weaves in flight only disguise the method to his madness. He calculates that an enemy would be far more terrified by someone who appears to be insane than by a purely rational opponent. Indeed, he is right. One single, lunatic dive of Whirl's will often send Decepticons scurrying for cover even before he starts firing at them. "An attack of insanity can be just as effective as an attack by a proton bomb," says Whirl.
Abilities: As a helicopter, Whirl can fly at a speed of 400 mph. He has a range of 16000 miles. His manoeuvrability is amazing -- he can fly at virtually any angle except upside down, and even that he can achieve while doing loops. He packs four incendiary-shell cannons and a high-energy photon beam rifle. He has enormous strength in robot mode and carries a hand-mounted null-ray module that shields him from any energy beam directed at him, and a leg-mounted paralyzo-box that injects a powerful, disabling fluid when bought into contact with other robotic life.
Weaknesses: Being reckless, Whirl is prone to disabling himself by damaging his rotor blades. 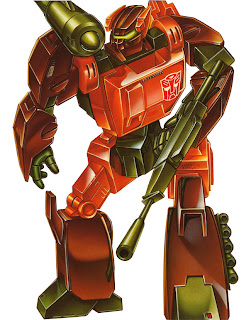 Roadbuster
Profile: 'Demolishing Decepticons' is the way Roadbuster prefers to pass the time. If he's not fighting, he's just not happy. This isn't because he's particularly hot-tempered -- he just bores easily.   When not in battle he's usually the most quiet of all the Autobots. But give him an enemy and he reverts to rough no-nonsense form and attacks with a zest unsurpassed by any of his comrades. It is in combat situations that his charisma surfaces, inspiring his fellow warriors and making him a natural leader. "With Roadbuster leading us, no one worries about consequences," says Tracks. "We just want to scrap some steel!"
Abilities: In jeep mode, Roadbuster can cross all but the most extreme terrains. He can traverse swamps, rocky hillsides, ice and mud without any problems. He has a range of 600 miles. He carries a turret-mounted linear blaster gun which can blow a hole through two feet of concrete. In robot mode he has a laser rifle as well as a shoulder-mounted shrapnel-missile launcher.
Weaknesses: As a result of his tendency to tune out non-combat situations, Roadbuster is sometimes unaware of impending danger. It is only when he is directly confronted by it that he will react, and by then he is often in more trouble than he can handle.
Posted by Jimtron at 9:57 AM

Looks much better with the pair back together doesn't it. I'll have to run through the rest of that box as I found some other cool stuff I'd forgotten about as well including some of the other profiles you published and some you didn't that I need to check to see if those are also new

Looking forward to seeing what you can dig up! Thanks again for this, completing the missing 1985 guys.

TF@tMoon- That is one heck of a box!!

Thanks to "Transformers At The Moon" and "Boltax" for providing these wonderful extended bios! I am a HUGE fan of these two so imagine how pleased I am for having these bios added to my collection.

These are awesome. Thank you very much "Transformers At the Moon".

Even after all these years, Budiansky's TF profiles still has a flavour , succinctness and complexity that is unmatched.

I continue to be amazed.