Review: War of the Worlds, the series ep 21 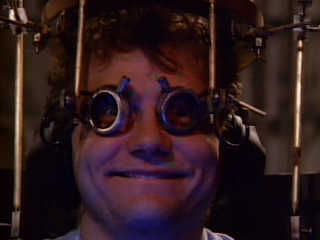 So Shall Ye Reap is the twenty-first episode of the War of the Worlds series.  It depicts the alien's attempt to infiltrate the human drug scene with a designer drug that turns humans into homicidal maniacs.  The scientists responsible for developing the drug have run into problems, prompting the Advocacy to send an Envoy to speed things along. Soon the head scientist is replaced, to presumably die a grisly death off-screen at the caverns, and the aliens are making real progress. They even send one of their victims, former vice detective Jack Sawyer, (shades of Lost pop into my head inevitably at his name) into a strip club where he proceeds to tear up the place.

Meanwhile, with strange drug overdoses all over Chicago, the team attempts to infiltrate the Chicago police departmentas DEA agents. Lieutenant Novak doesn't trust them, though, and soon manages to break their cover story. A call from the ever-referenced but seldom seen General Wilson (drink!) straightens things out with a new cover story; they're an anti-terrorist unit. But soon even that proves insufficient and Harrison tells Novak the truth. With some help from her mob contacts, they locate the alien base and storm it.  What they find is a host of dead aliens and drug-addled victims of alien experimentation.  The drug, you see, turns humans indiscriminately violent, and so the aliens abandon this line of attack as too risky to themselves. 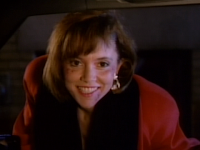 The Good: There were some nice touches here and there.  I rather liked the alien who was collecting human specimens. We first realize for sure what she is when she goes to press a button in an elevator and you see the rash on her arm.  When we next see her, she's streetwalking and having much worse luck; her burns have gotten worse. "Can we call it a night? I'm falling apart," she complains, almost literally. 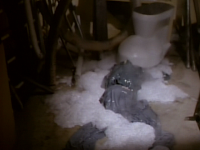 I've got a thing for alien deaths - in this case, an alien guard gets killed by a prisoner with a toilet. It seemed very appropriate during a prison break somehow. 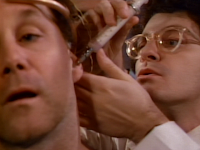 I rather liked the method of drug injection; in through the ear.  It's nicely creepy and not at all how humans normally do things. It's also nicely dark when humans voluntarily bite down on glass containers of the drug, cutting up the insides of their mouths.

The Bad: None of those elements ever really gel together well.  The sex and violence connection was touched upon, but never really explored in depth.  Meanwhile, the parallels between the Envoy and Novak weren't used to illuminate anything about the differences in alien and human relations. 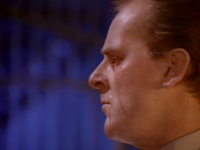 The alien's seemed a bit too human in this episode.  Whether it was the pasty and constantly leaking (his eyes, ears and nose were always running) head scientist, or the trio of aliens collecting humans for experimentation ("We did pretty good tonight." "'We?' All you did was drive the van!") they seemed more petty than usual.  It have been interesting if it went somewhere, long or short term, but as it is it just felt inconsistent with what had gone before.

Also, the vice cop, the same one who gets sent on a rampage, gets captured when trying to arrest one of the aliens for prostitution. It's true that she picked him up in a bar, but she never propositioned him, so what's the deal? A minor nit, but it bugged me. 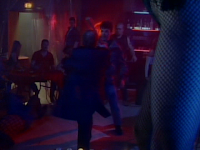 When Sawyer goes bonkers in a strip club, the girl on stage keeps dancing.  This strikes me as highly unlikely. I tend to think she'd have gotten off the stage the moment the dude with the baseball bat started swinging.

Also, why would it bother the aliens that the drug turns humans against each other AND aliens.  Humans outnumber aliens by, what, 600,000:1?  Besides that, what was their distribution model for this drug? It seems to turn people violent in moments, so how are they expecting to get it into the hands and ears of junkies everywhere?  The plan doesn't seem well thought out.

Finally, the pacing seems really odd on this episode. I found myself wondering when it was going to be over.  I think perhaps it's because of all the elements present. You have a lot of characters and a lot of themes, but overall the whole is not greater than the sum of its parts. 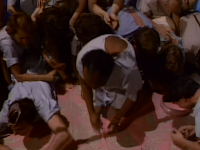 The Ugly: There were many disturbing images in this episode, but I think the shot at the end of the addicts clamoring about the floor to drink up as much of the drug as they can, their lips and tongues bloody from the glass shards, is going to get my vote.

There you have it.  An episode with a lot of potential but, unfortunately, it fails to live up to that potential.  Oddly, while the show seemed to hit its stride around the middle of this season, that energy seems to be slipping away somewhat as we barrel towards the endgame.   War of the Worlds - The Complete First Season

is available for sale on DVD.
Posted by Jimtron at 2:51 PM

Despite I wonder why Jack Sawyer was going to arrest Sherry for prostitution I rather enjoy this episode. I think one of my favorite lines was Envoy's line to the Director:

"Don't be so pessimistic, comrade. Perhaps, they'll take pity on your miserable existence. Your feeble pleas may move them so much, you might be permitted the honor of taking your own life."

I rather enjoyed Envoy belittling the other aliens (my favorite line being the, "No wonder you scientists have been relegated to a lower class," one.).

BTW, Envoy was played by Jill Jacobsen- who was married at the time to Greg Strangis. A bit of nepotism there, but I thought she was a suitable foe.

Also, during the teaser sequence, if you freeze-frame the imagery, you will find stills of bare-breasts that the producers were able to sneak in.

Also, the bouncer at the bar who gets beat to death by Jack Sawyer played Bull from "The Meek Shall Inherit".

The Envoy's relationship to the scientists worked pretty well, and the lines you single out are some of her better one. I also edited the post to add in a Good that I forgot, a nice alien death via toilet.

Also, I remember that the actors playing Jack Sawyer and Lt. Novack were regulars on a series called ADDERLY which was a show that first season producer Jonathan Hackett worked out. So, it was a mini-reunion in some ways.

Thanks for coming by and sharing your perspective and insight. I love that sort of trivia.

Great insight on the aliens' strategy here. It makes no sense for them to be concerned about the drug being dangerous to aliens as well as humans. After all, they are a minority on this planet, and could just sit back and watch the addicted humans destroy themselves.