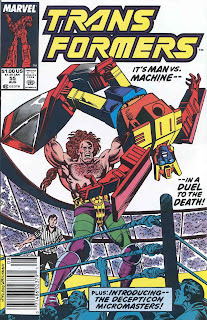 The Interplanetary Wrestling Championship! is the fifty-fifth issue of the US G1 Marvel Comics run of Transformers, and Bob Budiansky's last issue on said series.  It's also the fifty-fifth Transformers comic he would write. He wrote all but 4 issues from 5 - 55, plus 4 issues of Transformers Universe and 4 issues of Headmasters.  This means that he wrote over half of the Transformers comics produced by Marvel in the US.  (By my count, 80 issues, 4 issues of Headmasters, 3 issues of G.I. Joe vs Transformers, 12 issues of G2, 3 issues of the movie adaptation, 4 Universe profile books, or 106 comics.) Even the books he didn't write he was often involved with; he edited the first four issues of the regular run of the series, as well as the movie adaptation.  This multi-talented guy also drew many of the covers, including the iconic one to the first issue of the Headmasters mini-series. He also wrote up the bios for perhaps every character in G1, both the short on-package versions and the longer ones which were used in the Universe profile books.  He is one of the primary architects of the Transformers mythology, and it's more than appropriate that he be inducted into the Hall of Fame at BotCon this year.  On a personal note, he was incredibly helpful in making the first Ark book as comprehensive and full of quality as it turned out to be, and I owe him a great debt.

Sadly, none of that changes the fact that this, his final issue for seventeen years, isn't very good.  Let's get back to format for a bit, shall we? In addition to writing this issue, Bob also did the layouts for the first ten pages.  Jim Fern finishes the rest of the layouts and does finished pencils.  Fern's other Transformers issue was Buster Witwicky and the Carwash of Doom!, where he also did finishes. It's pretty evident that he was one of their go-to guy for last minute fill-in work.  Newcomer Mike Gustovich makes his first and only appearance in Transformers as an inker here.  Rounding things out are colors by the ever-reliable Nel Yomtov and letters by Jim Massara.  The cover is by José Delbo, and I'm just a little surprised that Bob didn't choose to draw this one too.

The cover is what it is.  A ridiculous-looking wrestler holds Roadhandler over his head, while a ref looks on.  They seem to be in some enormous stadium with tens of thousands of onlookers. "It's Man vs. Machine --   -- in a Duel to the Death!" we're told.  It isn't, though, so points off for lying to us.  "Plus: Introducing -- the Decepticon Micromasters!" If they're anything like the Autobot Micromasters, color me unimpressed.  Delbo cheats and hides bothe the wrestler's hands behind Roadhandler's body.  His design isn't particularly appealing, and looks a bit too supervillain for me. I mean, if he actually WAS a supervillain, that'd be one thing, but he's just a wrestler.  I could be charitable and chalk that up to misdirection, but I don't think it is.  So, in short, it's a slightly lazy rendition of an idea that isn't particularly enticing to me, and misleading to boot. 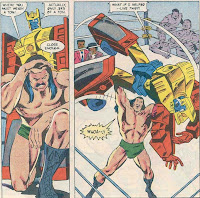 The issue itself is also one of the weaker ones, though not without its charm.  It opens with Roadhandler on Cecilia Santiago's talk show, alongside wrestler Jake "The Jackhammer" Jackson. After learning that the Micromasters are fighting crime in New York, Jake challenges Roadhandler to a match. He soon learns what we all know; wrestling is fake.  Surprisingly, he quickly gets into it and agrees to a televised match where he'll play along to make Jake look good. The only stipulation is that Roadhandler gets to win. Soon his string of victories brings him much adoration, and he uses his publicity to help promote the good name of the Autobots. "Each victory becomes another opportunity for the moralizing Micromaster... " Bob writes, in one last bit of alliterative prose.

Humans aren't the only ones who notice what he's up to.  Lord Zarak, bereft of armor and looking rather patriarchal, attends a match and decides that the Autobots can't get publicity like this. Inexplicably, he decides to fight the Autobots at their own game, rather than just attacking a well-publicized match with overwhelming force.  Instead, he summons some Decepticon Micromasters to Earth. He then brashly shows up at their gym and demands a match, threatening to ... well, to do exactly what I was thinking they should do anyway if they don't. We get some hints that the Decepticon Micromasters might have a deeper purpose to be here, no doubt thrown in to help set up some future machinations from the next writer, one Simon Furman.  Call me crazy, but I actually think the image of Zarak, looking smug, with four Micromasters behind him in oversized coats and cowboy hats is kind of awesome in a bizarre, comic-booky way.

All that remains is the match itself. But will Decepticons fight fair? Hardly! They plan to kidnap Roadhandler's fan club, forcing him to lose. I suppose that there's a certain irony to the climax of the book being the hero faking a wrestling match, though I'm not sure that that's intentional.  Cecilia, though, anticipated this move and asked several of the other Micromasters to stay near the kids.  They all manage to make it to the church on time and Roadhandler beats Stormcloud handily. However, he realizes that by allowing humans to get close to him, he's putting them in danger and quits wrestling.  He tells the kids to buzz off, upsetting them terribly, and rolls out into the sunset as Cecilia looks on.  I can't help but think that there was some middle-ground there, since his efforts really did seem to be winning the hearts and minds of humanity.  Had Roadhandler been spearheading human contact, RAAT might not have been necessary.  Though, one DOES wonder where Circuit Breaker was through all of this.

Ultimately, we the audience were asked to swallow a lot for not that much payoff.  Why would Roadhandler agree to participate in what are basically fixed fights? Sure, he was the superior opponent and the perpetual victory, but by allowing his opponents to seem to have a fighting chance isn't he, in a way, cheating? Why would Zarak think that it's necessary to beat Roadhandler in the ring. Was he worried that the Autobots would seem TOUGHER than the Decepticons? And why would Roadhandler throw away a good fraction of his work by insulting humans on his way out.  Couldn't he just say that his wrestling was putting humans in danger and that he'd limit himself to unpredictable crime fighting from now on?

The artwork was mixed.  There are some nice action bits in there, it's true.  I rather like Roadhandler using centripetal force to smash Stormcloud into the ground.  Some of the faces were great, others were a bit off.  The final panel in Budiansky's run is Cecilia, watching the Micromasters leave. I was hoping for something a bit more poignant.

All told, it's a rather lackluster finale to an incredibly impressive run by Mr. Budiansky. It has some of the elements that made his run great, including a very human and relatable point of view.  I can't help but think that issue 50 or 51 would have worked much better.  This book fails to be much more than an advertisement for toys, with little to say about the human condition. I can't blame Bob for being a bit bored of writing a toy tie-in comic for year after year, though. I have zero doubt his 'legacy' on Transformers was the furthest thing from his mind when writing this book. He was probably much more concerned with leaving a relatively clean slate for his successor. In that, he does admirably, more-or-less tying up the Micromaster plotline and leaving a fairly open canvas to Furman. I rather like that he gives a bit of foreshadowing to Stormcloud's deeper purpose, whatever that turns out to be.

Though THIS issue is mediocre, Bob's run is anything but. He takes the series from the rather weak opening he inherited and tells some very powerful tales right from the get-go.  Shockwave's impressive rise as leader, the tragedy of the Headmasters, the horrors of the smelting pit, the abject fun and silliness of Carwash, the first real bloodbath in Transformers history that is The Underbase Saga, the triumph that is Blaster, the misstep that is Grimlock ... he does a lot, establishes a lot. His imagination and vision helped make Transformers the billion-dollar franchise that it is today, and I for one and incredibly grateful to the man. He's not done with Transformers yet, either. He'll still write up treatments for the Action Master origin, write up bios for the rest of the G1 toys, and eventually come back to write a brand-new 1986 movie adaptation. I'm looking forward to shaking his hand again at BotCon 2010.

Next issue, we're prompted to wonder "Guess Who's Back from the DEAD?!" The answer will turn out to be ... totally awesome, actually. The Interplanetary Wrestling Championship! is available for purchase in IDW's Classic Transformers Volume 4

My inability to go to BotCon 2010 was a foregone conclusion as soon as I learned it was in Orlando. Although I usually say that it's more or less all about the exclusive toys for me each year, missing the chance to meet Bob Budiansky in person is definitely my deepest regret about not being able to attend. I hope those that can enjoy themselves, and that Budiansky's experience is a positive enough one that I might be able to get another opportunity at a future convention.

Well it's been a fun ride with Uncle Bob, I'm sorry he went out on such a whimper though.. But such is life.

I can already feel the Furmanism's hovering over us like some vast predatory bird.

Wrestling is just entertainment, just like this comic book. I don't think "cheating" really applies in the way you're talking about here. ;P

Transformers definitely had Bob's fingerprints all over it- makes me wonder what it would have been without him. I can't imagine it would have had as much heart.

AS for your criticism, Roadhandler prabably figured that, to respect human culture, he should go along with the fact that wrestling is fake. It is difficult to win over humans, which is what Roadhandler's goal was, if you do not respect their way of life, or what you think their way of life is.

Roadhandler brutally severing contact with his human friends was the best way to ensure that these humans stay away from him. Humans could be sentimental, you know.

I liked the advice that Roadhandler gave: don't beleive in heroes, believe in yourselves.

I gues we all have our likes and dislikes.