Review: Marvel G1 #52: Guess Who the Mecannibals are Having for Dinner? 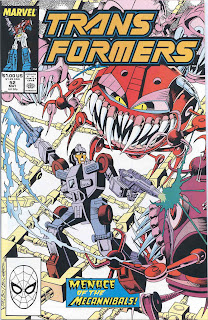 Guess Who the Mecannibals are Having for Dinner? is the fifty-second issue of the US G1 Marvel comics run of Transformers.  It was written by Bob Budiansky, penciled by José Delbo, inked by Dave Hunt, colored by Nel Yomtov, and lettered by Manny (not The Hands of Fate) Manos. Delbo also drew the cover.

The cover is a mixed bag.  Landmine battles some bizarrely-designed toothy monsters with multiple legs, standing on some kind of mechanical web.  The Mecannibals look great, I have to say.  But Landmine seems off.  His pose looks like it should be dynamic, but there's no energy to it.  It also looks like Delbo couldn't decide if he's standing on a web or leaping.  There's no sense of vertical motion, which argues for the former, but he doesn't actually seem to be standing on the web either.  The decision to color the background under the web whit similarly robs the image of any sense of depth.  "Menace of the Mecannibals!" it tells us. 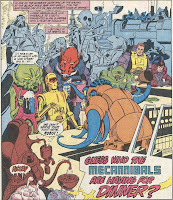 The issue itself suffers from analogous flaws.  It can't quite decide what kind of story it wants to tell. It starts off in a Cantina-like bar on the Grand Central Space Station.  (Since Bob lived in New Jersey and worked for Marvel in Manhattan, he'd be very familiar with Grand Central (train) Station, which he is nodding to here.)  Cloudburst and Landmine, in their giant human disguises, witness a wimpy robot get tossed out of the bar and into space.  Impulsive Landmine tries to stop this from happening and gets into a nice brawl.  Cloudburst bemoans how complicated partnering with Landmine can be.  They have a quick flashback about their mission, to buy microchips on the black market to try to reverse some of the damage caused by Starscream.  We also learn, somewhat redundantly, that GCSS is not robo-friendly.  Finally, we see a pair of diminutive (read: normal-sized) human figures in cloaks, observing the happenings with interest.  It's an odd opening, one that emphasizes the relationship between two characters that we've never really met before.  I'm willing to run with it, though.

The meat of the plot starts when they walk down asteroid alley, looking for sellers of high-quality microchips.   They meet with little luck and much racism before the two cloaked figures offer to hook them up what they need.  However,.a chance encounter with Berko (remember him?) lets them know that an Autobot, Sky Lynx,  might potentially be in trouble at the hands of those two.  Landmine wants to go try to rescue him, but Cloudburst restrains him; the dozens of Autobots who desperately need microchips take priority over someone who merely MAY be in danger. Once again, the Cloudburst / Landmine tension seems like the most interesting aspect of the story.  The return of Sky Lynx and Berko feels more like tying up loose ends than like something the story necessitated. I am starting to dig the many weird aliens Delbo throws at us, though.

The two figures turn out to be Throttle and High-Test, binary bonded to Darkwing and Dreadwind.  We learn that they are getting paid to feed their shadowy 'bosses,' no doubt the Mecannibals seen on the cover, robots.  They move to collect payment from the Autobot Pretenders, but once again Landmine's sense of morality and willingness to put himself in danger gets in the way.  He demands to meet their bosses himself, something that normally isn't done.  However, apparently five hundred million microchips are a big enough deal to warrant an exception.  They travel to a pretty awesome looking insectile ship where, halfway into the book, we meet the Mecannibals. They are indeed red spidery aliens on a techno-web, lead by Master Mouth.  These rude aliens are somewhat annoyed at having their dinner disturbed.  The appetizer is the Chromite, the robot who Landmine tried to help before.  We're treated to a rather macabre off-panel devouring, but the main course turns out to be none other than Sky Lynx! Landmine rescues him with his inner robot (left behind when the shells went in to conclude the deal. He then shoots the energon that they just used as payment for the microchips and uses the blinding light to recombine with his shell unnoticed.  Ballsy, ballsy plan there, Landmine.

The Pretenders leave with their microchips, then go back for Berko.  This is when things start to fall apart a bit.  Berko won't trust them, because they're 'humans.'  They grab him and take him to a back alley, where they reveal themselves to him to get them to trust him.  Unbeknown to them, Throttle and Hi-Test are tailing them.  Once they know that those two are robots, they arrange for them to be chucked out an airlock at the bar the issue opened with.  When they go back to settle Berko's tab (how could Throttle and Hi-Test know they'd do that, anyway?) out they go.  Soon the combined form of the Decepticon Powermasters, Darkwind, blasts them and they're subdued.  When they wake up, they're back in the layer of the Mecannibals! Of course, it's to be continued from here.  Sadly, while most of the logic of the issue is solid, at the end the characters have to drop a few dozen IQ points to fall back into the Mecannibals claws. 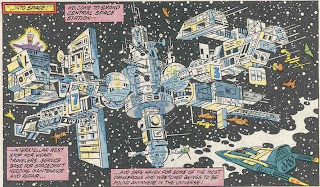 Overall thoughts: as I indicated before, mixed.  It's pretty clear that Budiansky came up with the name Mecannibals and built a story around them.  They actually work pretty well.  Their brusqueness, the sort of blasé horror surrounding them, their mismatched design, it all sort of works.  The way we get there, though, doesn't quite.  I feel like I should like the extensive characterization given to the pair of Landmine and Cloudburst, but I don't. Maybe it's just the timing of the issue; they'd been around for over a year at this point, so to focus on them now seems a bit strange somehow.  Having four old characters who had been floating in limbo show up also doesn't help.  Again, it feels like there are a lot of potentially cool elements here, but they don't quite gel together into a cohesive whole.  I do love Delbo's art, though. He's at his best when he can draw the unearthly, and there's plenty of that at G.C.S.S.

Next month, "The Main Course!"  We'll see if that manages to weld the many elements present together in a more coherent way.  Guess Who the Mecannibals are Having for Dinner? is included in IDW's Classic Transformers Volume 4

, available for purchase.
Posted by Jimtron at 10:49 AM