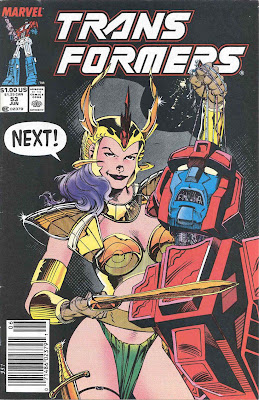 Recipe for Disaster! is the fifty-third issue of the US G1 Marvel Comics run of Transformers. It was written by Bob Budiansky, drawn by José Delbo, inked by Dave Hunt, colored by Nel Yomtov, and lettered by newcomer Jade Moede.  The cover is by HOLY CRAP ... JIM LEE?

Ahem. Yup, Jim Lee cover.  Keeping in mind that, back in 1989, he was still pretty new on the scene, it's not THAT surprising, really. It's a rather lovely depiction of a huge, armored-bikini-clad amazonian woman, holding Cloudburst's head by some wires with a sword held ominously in her hand.  There's a nice contrast between the soft lines of the woman and the hard and detailed lines on Cloudburst.  It's not Jim Lee's best work, far from it, but it's a rather nice cover for Transformers.  "NEXT!" she says as she looks right at the reader.  Despite the decapitation, I can't help but imagine that many young readers would have like to be next.

The cover does seem a bit disconnected from the cliffhanger we were left with last month, but the opening page dispels that notion. The action starts where we left off, with Cloudburst and Landmine restrained and about to become dinner.  After a brief bit of back-and-forth exposition about what happened last issue, they pull out an electro-magnet and forcibly separate the Pretenders from their shells. This proves to be an oversight, though, as the shells are now free to engage in battle. Even still, though, the Mecannibals manage to corner the good guys. Cloudburst, though, once again manages to reason his way out of things. He describes a delicious meal of robots marinated in mercury, garnished with lead sulfide crystals and sprinkled with iron filings. Incredibly, the Mecannibals go for it, offering to spare their lives in exchange for cooking their next meal.  This rather silly plot twist is derided by Hi-Test and Throttle, perhaps as a way for Bob to acknowledge that it's a bit weak.  We keep the theme of Landmine wanting to fight and Cloudburst wanting to talk going, but in a way that rather strains credulity.  Ah, well.

Soon, our heroes are sent to the nearby planet Femax, where they are to gather the crystals they need. Berko remains behind as collateral. Hi-Test and Throttle don't want to risk letting Autobots go, and so follow them. Sky Lynx, skulking nearby, in turn follows them.  Oh, what a tangled web! Sky Lynx observes as the Nebulon engines combine with their Decepticons allies, but sticks to the shadows.

On Femax, the Autobots find some primitive giants, all men.  The crystals that they want are inside a mountain with a massive steel door.  Rather than go through the door, they decide to go under it and soon discover a verdant paradise within.  Artificial sunlight and climate control are at work to maintain the environment.  Before long, they are beset by amazonian women wielding spears (really, they've got artificial sunlight but are using melee weapons?) and speaking in a strange tongue.  Landmine keeps them at bay while Cloudburst figures out the translation.  Once he does, he expresses peaceful intentions.  The women decide to bring the Autobots (still disguised as humans) back to their leader, the First One, to decide their fate. 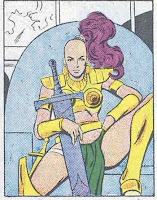 The First One, the leader of the Amazons, languishes in her throne and listens to Cloudburst's words. She decides to give the Pretenders the crystals they seek ... if they can withstand their physical tests.  Landmine tries to be the champion, as after all, he's the more physical of the two Autobots, but the First One only has eyes for cloudburst.  She watches, rather suggestively, as he wresles with monsters, dodges missiles, and jousts on lizard-back.  Finally, impressed, she takes Cloudburst away for his reward.Once again, Delbo's artwork is strong during depiction of alien elements, such as the horse-like lizards ridden by the contestants or the green horned monster he battles.  The choice of making the first one mostly bald, with cascades of hair in one long plume, is an odd one. It makes her appear rather severe.  Lee cheats by putting her in a helmet that disguises this fact, but it does diminish her sex appeal a bit.  Perhaps if Delbo wanted her to appear tough at first but softer later, he should have given her a more conventional hairstyle and hid it with a helmet during her first scene.

She leads him to her private chambers, where she asks him to doff his armor. He rather blankly looks at her when she informs him that he can have the crystals, and "much, much more."  With him still not getting it, she tries to kiss him and offers him the position of Second One, her mate. He decides that the time for deception is over and reveals himself to her. She does not take this well. Even as she accuses him of tricking her, she draws her weapon. Over his protests, she lops off his head in one blow. KLONK! I love how clueless he is about the whole situation. Even the most naive of readers will have picked up on her interest in him, but as a robot the idea of this kind of relationship never enters his mind.

The First One storms out, sword in one hand, Cloudburst's head in the other, and comes for Landmine. His first instinct is to fight, of course, but he decides to do things Landmine's way for once. He manages to talk the First One down. She decides to make amends. Before long, a repaired Cloudburst and Landmine are receiving crystals, as well as the friendship of the Femaxian women.  As they exit the mountain, they are beset by Darkwing and Dreadwind, but Sky Lynx gets the drop on those goons. They return to Master Mouth with the crystals, but negotiate a new deal. Rather than cook their next meal for them, the Autobots will leave with Berko in exchange for not destroying the ship of Hi-Test and Throttle, their robo-spotters. They ALSO demand that the Mecannibals repair all of the robots they digested, rather than keep the 500,000,000 microchips. The Autobots wouldn't want to live at the cost of other lives. The Mecannibals reluctantly agree, but to put a cherry on top of this Sunday, the Autobots THEN inform the Mecannibals that the Dreadwing ship is in fact a robot. 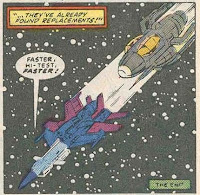 The issue ends with Sky Lynx (who we'll never see again) and Cloudburst flying back to the Ark, and the Mecannibals chasing the Decepticons.  Once again, the negotiation with the Mecannibals rings false. Are their contractors, the robospotters, really worth THAT much to them? And why would the Autobots then TELL the Mecannibals that the bargaining chip that they JUST played was based on deception? Are they THAT sure of the Mecannibals' word?

Overall, it's an ok issue on its own, a bit weak in the context of the two-parter that it concludes. The Femaxian story is a decent vignette, but it feels thematically and tonally disconnected from the Mecannibal story surrounding it. Landmine's story arc feels rote, by the numbers. Yes, he comes around to Cloudburst's way of thinking, but we don't really see why. Also, Cloudburst never really sees his side of things, which makes that arc feel a bit lopsided. Finally, the odd business practices of the Mecannibals are a distraction. It's not a terrible comic, but it never transcends mediocrity either.

Next month, we're promised "The newest -- and Smallest -- Transformers yet: The Micromasters!!" It dosn't sound particularly promising, but we'll see. Recipe for Disaster! is included in IDW's Classic Transformers Volume 4

these last few issues from Budiansky always have felt really phoned in to me.. Like he just had no idea what else to do with the series after Dark Star. Though, I don't want to come across as unduly Harsh.. even Roy Thomas had his low spots on Conan and Larry Hama on GIJOE.. But they stuck around long enough to work through them. I'd kind of liked to have seen what Bob could have cooked up if he'd stuck around.

(really, they've got artificial sunlight but are using melee weapons?)

The very same Autobot Pretenders who are the focus of the issue are among many Transformers who utilize melee weapons, so I don't really see the problem...

@Lagomorph Rex: Maybe Bob knew he'd be stepping aside soon, and didn't want to glut up things too much for his successor?

The cover is what encouraged me to buy this issue. The one he did for issue number 67 was at least as good if not better.