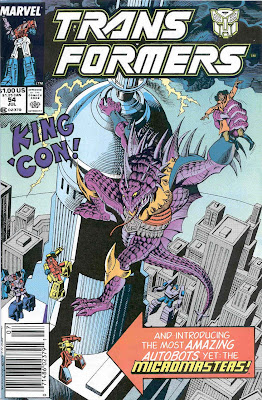 King Con! is the fifty-forth issue of the US G1 Marvel Comics run of Transformers.  It was penned by Bob Budiansky, and is in fact his penultimate issue.  José Delbo continues to provide the layouts and partial pencils, with inks and finishes by Danny Bulandi.  As always, Nel Yomtov provides the colors, and newcomer Jim Massara does the inks.  The cover is by Delbo.

It's a cover that works better than the sum of its parts.  Iguanus climbs the Empire State Building, clutching a human in his claws.  Four micromasters attempt to deal with him from a lower level.  Lightning flashes in the background as ominous stormclouds gather.  Basically, it works really well, with a giant purple focal point in the middle.  However, when you examine the anatomy and perspective, you realize that it isn't really close to being right.  The woman looks particularly stiff, and the weird motion lines don't do much to help.  Road Handler, too, has something weird going on with his neck and chest.  "King 'Con(tm)!" it says, though I doubt that Hasbro or Marvel actually copyrighted the word "'Con."  That's a bit unnecessary, as the title page will say the same thing.  What's more awkward, though, is the enormous honking arrow that states "and introducing the most Amazing Autobots(tm) yet: the MICROMASTERS!"  Note how the text of the word Autobots overlaps with the Micromaster logo.  Clumsy.  Also, was the art really that bad that you couldn't tell which of these guys were the Micromasters?  Despite all these flaws, it basically works.  You get the King Kong reference right away, and it's visually pleasing if you don't analyze too deeply.

[Warning: I'm in an odd mood, so this review will be a bit more playful than normal. BE PREPARED!!!]

The issue opens with a trio of hunters, Gus, Juan and Morrie, trying to keep the wildlife of the New Jersey swamps away from their home.  What they find, though, is Iguanus, who promptly drives them off.  The opening sequence feels very Bob.  We introduce some humans, give them a smidge of characterization, then let the menace be seen through their eyes.  It work moderately well.

This incident will provide the first mission for the newest Autobot arrivals on Earth: the Micromasters. Optimus Prime and Hi Q wait at People's Gas (in communist Russia, Gas fills up You!) for a new trans-dimensional warp (looks like we can say goodbye to the space bridge)  to bring them reinforcements. (Yes, I had not one but two parenthetical in that last sentence. Yes, it's clumsy. Deal with it!)  Out pours eight Autobots, the Off Road and Race Car Patrols.  It's quickly established that these new Autobots are rebellious and bellicose. They have little respect for the "gas guzzlers" who dumped them on Earth to get rid of them.  When Hi Q doubts their efficacy on account of their size, Road Handler fires off a rocket fist (how 70s Japanese robot) and smashes the gas station sign.  (In communist Russia ... oh, nevermind.)  They are dispatched to New Jersey, to investigate both the creature sightings and odd weather patterns.  Off they roll, into our hearts! OK, that might be a bit over the top of me.   Actually, the whole sequence feels a bit perfunctory. Ho, hum, more Autobots and they're badass.  It's clear that Budiansky looked for some overarching characteristics he could give to all Micromasters to try to unify them a bit.  I imagine that, based on their size, he went with youth.  It's not a bad direction to go, though it isn't inspired. 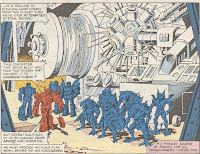 The next day, the Micromasters aren't the only ones patrolling the swamp.  A human reporter, Cecilia "Ceci" Santiago, goes looking for monsters.   She'll have good luck, too, as Scorponok has established a base at a dump site in New Jersey.  They have a rather cool looking piece of equipment designed to turn energy into energon cubes, and Scorponok intends to proceed with his new plan immediately thanks to all the media attention he's been getting.  The Pretenders are to be his instruments, probably because they were the least effected by Starscream's blasts.  Each pretender has a mission, though Skullgrin isn't too happy with his; guarding the Stormmaker.  Iguanus postulates that it's because he's a fleshling-lover, what with the whole movie star thing.   I love the artwork on the Con base, though there's something weird going on with Scorponok's dangling claw here.  Is that damage? From what, he hasn't been in a fight for five issues, and he had both his claws there.  Good continuity on Skullgrin's loyalties coming into question as well.

Santiago manages to be on-hand to witness the pretenders emerging from the swamp.  She hears about the purpose of the Stormbreaker installation thanks to more Iguanus/Skullgrin bickering, but promptly gets caught by Iguanus.  He wants to terminate her, but Skullgrin suggest keeping her prisoner until the operation is finished.  There's what looks like an art mistake, where Skullgrin points to the city and says that half the fleshlings there will be terminated, so what difference does one more make?  It was probably supposed to be Iguanus.  When Skullgrin demands the human, Iguanus gives him a bitchslap.  (Pardon my French there, but just look at the artwork on that. Lovely!) Whak! Following the 'it never rains but it pours' principle, appropriate given the weather, Mudslinger picks that moment to make his appearance. The human gets forgotten and dropped in the ensuing melee, though Mudslinger radios the Race Car Patrol to pick her up on the highway.  When the rest of the Off Road Patrol shows up, Iguanus abandons Skulgrin to these four tiny titans and makes off to complete his mission, mounting the Electrostator on top of the Empire State Building. (Do you see where this is going?) Flippancy aside, though, this is my favorite bit of the book.  Skullgrin, having a speaking part for pretty much the first time since Monster-con from Mars!, apparently really has gone soft on humans.  Good for him! I like that kind of growth.  It's a shame we didn't get to explore that a bit more.  The Micromasters, on the other servo, continue to bore me.

Cecilia makes her way to the highway and flags down some cars. With her keen reporter eyes, she gets into a car that calls her 'human' and is driven by a mannequin. Cecilia, you're shaking my confidence baby! She demands to be let out, though Road Handler convinces her of his good intentions. We finally get to the real theme of the issue, which is that no matter how independent you are, you always need help sometimes. She helps them get to Manhattan by teaching them about tunnels and toll booths.  It's not terrible, but it's not great either. (Oh, and the Off Road Patrol manages to destroy the Stormbringer, but it's too late! The storm is already too strong.) 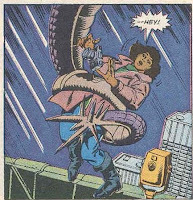 The issue lurches to its climax as Iguanus begins to climb. The Micromasters get high with a little help from their friends, sensibly, by taking the elevator up. They arrive a bit after Santiago, who knew better than they how to operate the elevator. (Sample dialog: "I think it's a binary code..." "try talking to it."  Fun.) Unfortunately for her, Iguanus snagged her with his tail and continued to climb.  He drops her as a distraction to the Autobots and plants the device.  With only seconds to spare, he summons the Pretender fliers. They pick him up just as the lightning hits the building, frying half of Manhattan and pulverizing the Race Car Patrol and Miss Santiago. Oh, wait, no. Actually, Roadbuster fires his fist and knocks the Electrostator off the building.  Iguanus, not quite thinking, leaps for it and takes the full blast of the lightning all by himself.  He falls 102 stories to his presumed death, though actually he'll be fine in like three issues.

All that's left is a half-page denouement.  The Micromasters accept Cecilia as a friend, and when Optimus rolls up and offers to help them get away, they reject him. They plan to stay with their new human friends.  It feels right, though when you stop to think about it it seems odd.  If they've REALLY learned that sometimes they need help, why are they rejecting it from Optimus? The lesson isn't at all clear. 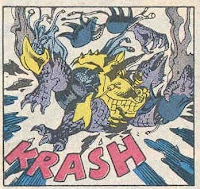 I'm sorry to say but, at this point, it feels like Bob is going through the motions.  The issue is an extended riff on King Kong, the themes of the issue are muddled, and even the bits that he normally does well feel a bit soulless.  The only moment in the issue that rang true for me was the Skullgrin / Iguanus interactions.  I did like Delobo's depiction of Iguanus.  The reptillian form worked well for him.  It's sad to say, but it feels like Bob is going out not on a bang, but a whimper.  King Con!  is available for sale in  IDW's Classic Transformers Volume 4

I agree this was a bit disjointed, but it was nice to see some more of the Decepticon Pretenders (their monster outer shells were always more interesting than the 'robot inside' gimmick), and I still smile at the Autobots trying to communicate with the elevator in binary code. The Micromasters did nothing for me (and worse is yet to come), but thanks for the fun review.

P.S. I think Scorponok's 'dangling claw' is actually meant to be the giant alligator clip that is going to conduct the lightening energy (Finback is later shown with it in a couple of panels), but it is a strange depiction, as the claw holding it is quite stunted. I'm guessing a confusion between the pencils and the inks, since part of the stunted claw looks to be shaded.

I actually liked the Micromasters... perhaps because I had them? Hard to say.

Thanks for the catch, David, I've fixed it now.

Yay, I made a difference! :D

I own WHAK.com and would like to know if you have more WHAK text in photos?

I'll bet a lot of comics do, but I don't actually own that image. I'm just using it under the doctrine of fair use for the purpose of review and analysis.

Late reply, but I always interpreted the 'Half the city is going to die anyway- what difference does one make' from Skullgrin to mean that it makes no difference if they let one of them go. Skullgrin obviously felt sympathies toward humans since his earlier encounters with them, and he was just fealing squeamish about the idea of watching Iguanus squish a squishie.