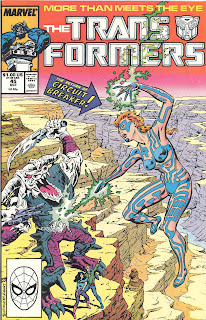 Monstercon from Mars! is the forty-fifth issue of the US G1 Marvel comics run of Transformers.  It was written by good old Bob Budiansky.  José Delbo and David Hunt once again use a breakdown and finisher style of art, with letters by Bill Oakley and colors, as always, by Nel Yomtov.  The cover is a Budiansky original.

And a rather fine cover it is, too.  Circuit Breaker battles Skullgrin at the Grand Canyon, while a pair of humans point at her by Skullgrin's feet.  Josie is looking as sexy as ever in her costume, and energy cackles from her hands and interferes with the Transformers logo.  Skullgrin's gun seems just a bit too small, a bit of perspective cheating in the name of composition.  And really, the composition is lovely, pulling the eye first to the lovely Ms. Beller and then to the gaping jaws of the Decepticon Pretender.  In fact, the only part of the cover that isn't pure win is the big arrow proclaiming "the return of Circuit Breaker!"  Um, yeah, I can see that.

The issue opens on an image of a rather attractive woman in a tunic being menaced by some sort of cyborg monster, while her lover Brick rushes to save her.  Or so things appear.  In actuality, they're filming a movie, and that quickly goes awry when the creepozoid goes on the fritz.  The director, Rollie Friendly, just oozes Hollywood smarm and arrogance, while the pretentious Jake Colton thumbs his nose at his costar, neophyte Carissa Carr.  The characters are broad, but that's ok.  One gets the sense that this is a one-off tale, and Bob doesn't have the time to develop them more fully.

With at least three weeks of downtime, Rollie's agent tries to convince him that maybe giant robots would work well in his picture.  This idea is dispelled, though, when news footage of Sky Lynx returning the four human children shows an ugly crowd driving him away. Shown to the audience but not shown on film is Josie Beller, getting ready to engage Sky Lynx before the crowd drives him off.  Sky Lynx was a good choice for this role, since his natural egotism compels him to stick around longer than strictly necessary to answer questions and take some photos.  This is about as close as he'll get to his wonderful tv portrayal, and it's a nice character moment for him.

Not to be discouraged, his publicist recommends Rollie investigate rumors of Big Foot sightings. Off he goes, with a camera crew and his two stars, to North Carolina.  While the National Guard doesn't want to let him through, a bit of green proves enough to get one of the locals to help him circumvent their roadblocks and soon the crew is face to face with none other than Skullgrin.  Incredibly, they manage to make peaceful contact with the monster, and he agrees to star in their film in exchange for fuel.  It seems his mission is to establish a fuel depot, and he's not above doing it honestly.  Actually, that's a very clever idea.  The Pretender shell is actually used in a logical manner, since a monster is just a curiosity but a robot is generally demonstrably bad in the minds of most humans in this continuity. 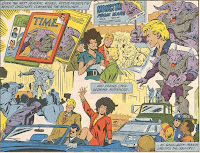 Skullgrin mania sweeps the country!  Really, who wouldn't want to see a real live monster, especially one that's comparatively friendly.   We get a nice montage of autographs, magazines, billboards and motorcades. But not everyone is convinced that Skullgrin is benign.  A blond woman in a wheelchair attends all of his public events, trying to figure out what his secret is.

Others get a hint as to the danger hidden inside Skullgrin's monstrous exterior during a press conference.  When a barrage of pointed questions throws him off balance, he smashes his podium and starts to scatter the journalists.  Carissa manages to calm him down, in what Rollie aptly calls a "Beauty and the Beast" moment.

To avoid any possibly fatal future blunder, Rollie announces that the set will be closed until after the movie wraps.  The wheelchair-bound woman is reluctant to leave, but when security starts to push her, Carissa personally reassures her that she's not going to be missing much; they're off to the Grand Canyon soon.  Great work by Hunt on the close up of Circuit Breaker's face.  She looks wonderfully devious.  Black eyebrows, eh?  I guess it makes sense that she dyes her hair, it goes from blond to red with alarming regularity.

Shooting indeed proceeds at the Grand Canyon.  While on a break, Skullgrin and Carissa bond.  When she makes a big deal out of stripping out of her costume and going back to her real name, Ethel Stankiewicz, Skullgrin decides to reveal himself as well.  Carissa is still taking it in when the watchful Circuit Breaker, who of course followed them to Arizona, engages the robot.  To make things worse for poor Skully, Carissa reveals that it was she who lead Circuit Breaker to him. Rollie, never one to miss a trick, orders Jake into the action and starts filming the altercation.  When the battle endangers Carissa's life, Skullgrin declines to save her ... until Circuit Breaker admits that she was blameless in the attack.  The apologetic Decepticon then rescues the damsel from the crumbling rocks.  Alas, this affords Josie the opportunity to blast old Skully.  But when Rollie offers her a king's ransom to finish the job on film, she blasts the camera and then inexplicably flies off, leaving Skullgrin wounded but alive. 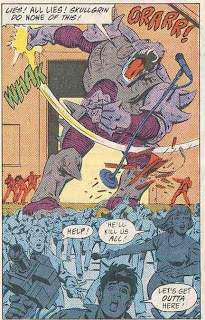 This is a surprisingly good issue.  The premise is pretty silly, but it's executed so well that I'm willing to overlook that.  It's nice that we get a Decepticon protagonist.  While ultimately his objective isn't good for humanity, he's certainly managing to achieve his goals without anyone getting hurt.  While we've had human antagonists before, they've never been paired with a Decepticon 'hero', and it's a nice avenue to explore.  It's also great to see Circuit Breaker again.  Having a supervillain that shows up from time to time helps keep the book true to its comic book medium.  Alas, we won't see her again until midway through Furman's run on the book.  Structurally, this is a very slick tale.  We quickly move from story beat to story beat, with an appropriate balance of foreshadowing and surprises.  Notice that it's not just Skullgrin that's pretending to be something he's not ... Circuit Breaker, too, hides behind the facade of a poor crippled woman to get what she wants.

The artwork as well is solid.  It's not as inspired as modern work, but there are some lovely shots of Skullgrin.  Hunt seems to relish the more organic feel of our main monster.  It's a bit of a shame he made Josie so butch, though.  The costume is sexy, but the short-cropped hair does nothing to accentuate that.

Next month, "The bounty-hunting Roadjammers stalk the Autobots for -- "CASH and CAR-NAGE!"  Sounds ... like more of these non-arc sorties.  We'll see.  Because of Circuit Breaker's status as a Marvel-owned character, Monstercon from Mars! couldn't be reproduced in IDW's  Classic Transformers Volume 3

.  It is, however, available in Titan's Transformers: Maximum Force

collection. Both are available from Amazon.com.
Posted by Jimtron at 11:25 PM

I'm kind of surprised that this issue is included in the IDW reprints.. I didn't think any of the issues with Circuit Breaker were..

I know Volume 1 of the reprints is lacking #3 and #9 But I'm guessing that they were able to work out some sort of deal? Do you by any chance know if they will be reprinting the missing issues?

Oh, Criminy! You're right. The inclusion of this issue in the IDW Collected Comics was merely as a text summary. It was late at night when I wrote that, I'll correct it.

What I'm mostly concerned about is that, since IDW didn't see fit to make some sort of deal to get to reprint those issues.. I assume that means the entire final 6 issues are just shot too.. what a bummer.. all cause of the stupid Neo-Knights..

No, as of Collected Comics #5, it looks like they worked out a deal with Marvel. The Unicron Arc will be available in all its glory!

Classic Transformers Volume 5: Issues 62 - 74, including the Matrix Quest and the introduction to the Neo Knights, building up to Unicron's arrival at Cybertron.

Classic Transformers Volume 6: Issues 75-80, plus Headmasters and the Movie adaptation.

Oh well that's definitely something.. I'd been dreading that.. I mean I have the Titan re-prints.. but others who don't would have been left completely in the dark. Hopefully in future print runs of the first 4 volumes they can correct the missing issues.. or even include them in a 7th volume or something. Now if only IDW will reprint the remaining UK issues that Titan never got around too...

I'm also pleased to note that IDW has now gone past Marvel's reprints of the GIJOE comic as well.. looks like I gotta add a couple of volumes to my shopping list.

Are the reprints recoloured better than the original Marvel issues?

Please let me know, thanks.

Sorry, the coloring is the same in the reprints. In my opinion, the reprints are worth getting if you're more of a book-guy. If you like a shelf full of novels and trade paperbacks and art books, then the collected versions make the comics a lot more accessible than digging through your old box of comics. However, if you're more of an individual issue guy, you can skip them.