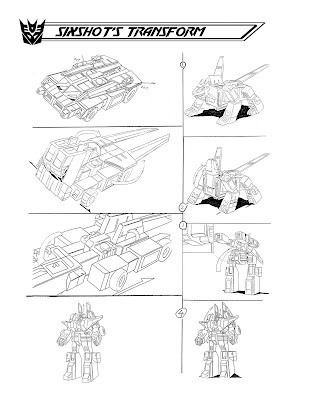 Where does the time go?  It's already time for another Ark Addendum? Crazy!  I've been swamped with AllSpark Almanac II work (man, I'm so psyched about this book!) so haven't had as much time to devote to other areas as I sometimes do.  Still, I had this piece good to go, so I figured I'd share it.  It's Sixshot's transformation ... 40% of it, anyway.  This is the car and the wolf, each transforming to robot mode.  I figured with Brian's ongoing Headmaster reviews, it was apropos.

For such a complicated toy, the transformation schema is decidedly simple.  I suppose that six intricate transforms would be a bit beyond the engineering of the time.  (Though, Gigatron from Car Robots would pull off six fairly intricate modes, including a hand, pretty well.  I remain unconvinced by the extra four modes given to Devil Gigatron.)
Posted by Jimtron at 10:51 AM

Awesome transform sequence... I never owned Sixshot as a toy, but as a kid I was mesmerized by his single appearance in the US G1 show. And so when I finally was able to watch the complete Takara Headmasters series I was happy to see the large role he played. And I liked that his character develops an interesting outsider status from both sides, later echoed in Sixknight from Masterforce.

Did Sixshot ever appear in the comics?

I know he's a total bad ass in the Headmasters show, even though he's evil of course, which probably didn't hurt his popularity.

According to the Wikia he did appear in several of the different comic's incarnations, none of witch I have read apparently.