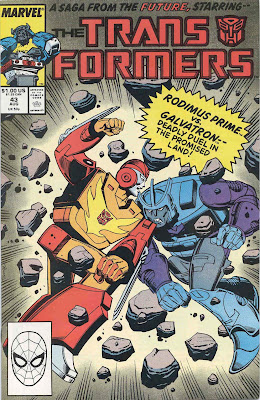 The Big Broadcast of 2006 is the forty-third issue of the US G1 Transformers run of Marvel comics. It stars no one and features nothing.

Ahem. Sorry. It's adapted from an original television script by Michael Reaves, uncredited in this book, by Ralph Macchio. Macchio had previously adapted The Transformers: The Movie and scribed the first issue of Transformers, so he's no stranger to Transformers lore. Pencils are by Alan Kupperberg, Inks by Dave Elliot, letters by Kurt Hathaway and colors by Nel Yomtov. The cover is also by Kupperberg.

It's a lousy cover. Rodimus Prime fights Galvatron, amidst an explosion of rocks. Both are horribly off-model; Galvatron lacks his cannon and his backpack, and Rodimus lacks his spoiler. The anatomy is terrible, with strange arms by Rodimus and a leg on Galvatron that connects to his stomach. Rodimus' left leg is a lot shorter than his right leg.  It looks like a horrid rush-job, which makes sense since this issue was undoubtedly a fill-in issue.  "A saga from the future", it's billed as, rather than the usual "More than Meets the Eye."  Perhaps that's good, because this issue is certainly LESS than meets the eye.  "Rodimus Prime vs. Galvatron -- Deadly Duel in the Promised Land!" it tells us. Ok ... but who are Rodimus Prime and Galvatron? If you've only been reading the mainstream comic, you'll have no idea. Also, Junk hardly seems like the promised land, so it's not even accurate.

Inside the book, things are no less clear.  We start by learning that a race we've never heard of before, the Quintessons, is sending a team of Sharkticons to the planet Junk to look for an object. Who are the Quintessons? Who are the inhabitants of Junk? We don't know, and we're not given much reason to care.

The Sharkticons find a  canister, presumably the object of their search, but are driven off by the Junkions and the canister lost. The Quintessons despair over this, then start to observe their opponents. Oh, and apparently they once ruled Cybertron. The Quints learn that all Junkion culture, such as it is, revolves around broadcasts from Earth. They give the Junkions a TV set which turns them into xenophobic neat freaks. Why xenophobic? No good reason is given. But at least they're now organizing the junk.

The Autobots find out that strange things are happening over Junk. Some guy named Rodimus Prime leads the Autobots, and he's assisted by Ultra Magnus. We've never seen either one of them before, and no explanation is given for where the newly resurrected Optimus is. Off to Junk they head. The Decepticons, too, lead by Galvatron (who?) and assisted by Cyclonus and Scourge, two nobodies who have only shown up in the Headmasters series. Galvatron wants nothing to do with it though.

The Arielbots in their combined form battle the Quintessons. Scourge and Cyclonus witness this, despite being ordered not to come here.The Quint transmitter is damaged, and the Junkions are instructed to share the signal with the galaxy, and the galaxy erupts in war. The galaxy also converges on the source of the signal for some reason. Rodimus and Ultra Magnus can fly. Galvatron is drawn to Junk by the signal and fights Rodimus Prime. Omega Supreme fights some alien, presumably organic, ships. Blaster, who's WAY out of character AND off-model, counteracts the signal. Galvatron blasts the TV, then tries to fight the Autobots and the Junkions. He's forced to flee on Blast Off, who wasn't shown before. The canister was being pulled up by a Quintesson tractor beam but got hit by a stray blast and went spiraling off into space, lost.  The Quintessons are prepared to die for their failure, but not before they retrieve it.  It's imperative that the Quintessons get it before it turns every sentient being in the galaxy against them.

What? Yeah, that's the end. It's an incoherent jumble of nothing.  We never find out what's actually in the canister or why it would turn the galaxy against the Quintessons. There are new characters and races showing up left and right for no reason (I know, I know, it's the future, but the new characters get no development at all.) There's a frenetic sort of energy to it, but it comes more from trying to cram way too much stuff in than from any deliberate pacing choices. Ralph Macchio is no stranger to Transformers, having previously penned the first issue and the movie adaptation. I feel like he should know better.

The art ranges from mediocre to bad, and there's no room to appreciate it anyway. There's not a single page in the book with fewer than four panels. This is especially a shame, since Kupperberg previously drew my favorite issue of the series, The New Order.  (He also did the subsequent issue, The Worse of Two Evils!.)

Now, obviously, I'm aware that this book was adapted from a television episode. However, that doesn't excuse the plot holes or shoddy artwork. A comic, indeed any story, needs to function in the medium it's presented in, and this fails on nearly every level. Also, it's hard to imagine a worse episode to adapt. Something from seasons one or two might have worked as a flashback.  Hell, even most other season 3 episodes would at least be self-contained, as opposed to part of what is basically a two-part story. If you didn't follow the cartoon, you'd be completely lost reading this story. If you DID follow the cartoon, why would you want to see the same story twice?

An honorable mention to how the UK comic mitigated this disaster. Furman had been running with the movie characters for quite some time by the point that this book came out, so his readers would be even more befuddled by this mess. He inserted a framing story making it clear that this is all the fevered ramblings of Wreck-Gar; very clever. I'll let my colleague Bish go into details when he gets to that point in his reviewing cycle.

Transformers had an 80 issue run in Marvel in the US; it also had four mini-series, a cross-over into the mainstream G.I. Joe book and a 12 issue sequel series.  All together there are about 104 full issues of content in-continuity, a 3 issue branch dealing with the movie, and a four issue profile book.  Let's call it 111 stories. Logically, if one were to rank those stories from 1st to 111st, one of those books has to be at the very bottom of the pile. Congratulations, this one is it, hands down.  Perhaps the only thing I enjoyed about the issue were the weird noises the Sharkticons made.  "Wrenk," "snart," "bnort," and "wronk," indeed!

The Big Broadcast of 2006 was sadly NOT included either compilation of the excellent UK story Space Pirates, which it serves as a prequel to once the framing story is included.  It is, however, included in IDW's  Classic Transformers Volume 3.Whether that's an actual selling point or not is highly debatable.
Posted by Jimtron at 7:09 AM

All together there are about 104 full issues of content in-continuity, a 3 issue branch dealing with the movie, and a four issue profile book. Let's call it 111 stories.

Actually, this particular "issue of content" is very much NOT "in-continuity," isn't it?

A good point. Neither is the movie adaptation, really. This is still as low as it gets, though.

"Also, it's hard to imagine a worse episode to adapt."

I just noticed this story was not included in the superb Titan reprint series, either.... That's a bit weird though. I'm still hoping that somehow, at some time, Titan will get another trade out including the movie adaptation and the Universe issues. Perhaps this issue would fit in there as well. And I'm still waiting for a few UK collections from the early issues.

Anyway, yeah, I wasn't happy with this issue either, I remember fearing as a kid that the follow-up episode would be adapted as well. I was both happy and confused when it turned out that we got back to continuity in the very next issue :)

I will say that most of Kupperberg's art (I've never really been a fan of his art, not even in Spectacular Spider-man) did feature correct animé models. There was one panel of Superion in particular that I did like quite a bit. It was a static headshot I believe :)