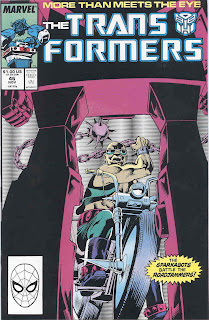 Ca$h and Car-Nage! is the forth-sixth issue of the US G1 Marvel run of Transformers. It was once again written by Bob Budiansky, who has entered his final year with the book.  José Delbo once again graduates to full-on penciler, with Danny Bulandi as his inker.  Colors, as always, are by Nel Yomtov, and letters are still by Bill Oakley.  The cover is a Frank Springer.

It's a fairly uninspired cover.  It attempts to capture the slightly unusual feel of the book, but fails. A rather tough looking human on a spiky motorcycle weilds a spiked flail against an oddly formless Transformer, seen from behind.  This puts the focus firmly on the human, who might be terrified or might just be really pissed off.  From the context of the book, he's the latter, though the cover doesn't make that clear.  Certainly a metal chain won't be of much use against a Transformer, so this hardly seems like a fair fight.  "The Sparkabots battle the Roadjammers!" we're promised, which doesn't mean too much to us since we don't know who either group is.

The issue opens with four bountyhunters going about their business and getting recruited by the Z Foundation, a group dedicated to the destruction of Automatons.  Burn-Out is recruited from a carnival, where he brings his own shotgun to a robot-shooting gallery and impresses the presenter.  Roadhog, our cover character, destroys a robot-themed car at a demolition derby.  Skunge and Felix, two short fellows (maybe midgets, the story isn't 100% clear on that) bring in a pair of criminals and are pointed to the Z Foundation by the local police.  These pages are actually rather well done, with each page telling a brief story and ending with the bounty hunter in question in the lower right of the page, intrigued.  Structurally it's well done, and quickly introduces us to our protagonists.

Soon the four of them are squabbling in New York City, at the Z Foundation headquarters.  The arrival of three suits with alphabet names stops them.  They are informed that there are two factions of Transformers, both of which are equally dangerous.  The Z Foundation will pay a bounty of $50,000 per robot, which seems to be the going rate established by the probably-defunct III.  They are given three jammers, devices capable of neutralizing a Transformer completely, and sent upstate to capture three Autobots.  After the newly-christened Roadjammers leave, the three inform the head of the foundation, Mr. Z, that everything is proceeding.  He initiates 'phase two.' 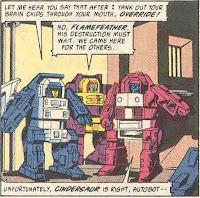 Dozens of light-years away on Cybertron, inside a Decepticon prison camp, six Autobots languish.  Three Firecons with terrible character models show up and have three of them come forward.  When they resist, we get a brief and lopsided battle.  The Autobots are reenergized and rearmed, then sent to Earth via the Space Bridge.  It seems that they were sent right to where the Roadjammers were looking for them.  Hmmmm ......

Using their technological toys, Roadhog easily subdues Sizzle.  Skunge knocks out Backstreet, but not before the Autobot informs him that he JUST arrived, sent by the Decepticons.  Fizzle tries to reason with his pursuer, but unfortunately for him it's the furious Burn-Out he needs to deal with.  The human shatters the Autobot's windshield with a shotgun blast, then chucks the jammer into the Autobot's passenger area.  This scene is more than a little awesome.

Afterward, the Roadjammers compare notes.  Felix, the real thinker of the group, is suspicious of events.  Somehow they come to the conclusion that Mr. K, Mr. L and Mr. B are colluding with the Decepticons ... without Mr. Z knowing about it.  It's a bit contrived, but they head back to the Foundation to try to trip up the trio.  Inside the Foundation's garage they find three headless bodies.  For, of course, Mr. L is Lokos, Mr. B is Brisko, and Mr. K is Kreb, three (Neublan?) Headmasters.  They're in for a surprise when they connect to their bodies, though .... Felix has split the frequency of each jammer, enabling them to jam not three but SIX Transformers. 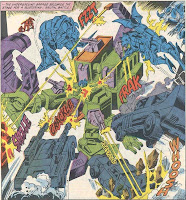 The handsome and powerful Mr. Z. shows up, impressed with their ingenuity.  But rather than try to trick them, he reveals himself to be Scorponok, and demands that they hand over the Jammers.  When they refuse, he commands Scorponok, somehow hidden in the garage, to attack them.  Felix has one more surprise for him, though.  He can operate the jammed robots by remote control.  We get a nice battle scene of six mindless Transformers assaulting Scorponok from all sides.  Soon, the mighty Scorponok lies in ruins, and Zarak has no choice but to reluctantly anti-jam all participants.  The newly freed Autobots swiftly help the Roadjammers get to safety.

The Autobots had an ulterior motive, though.  They wanted to collect the jammer devices.  As they Roll Out, into the sunset, the roadjammers bemoan their loss of $150,000.  Felix, though, has one more trick up his sleeve.  He's already started to reverse-engineer the devices, and realizes that the Z Foundation isn't the only game in town.  Once he's finished, the Roadjammers will be back in business! 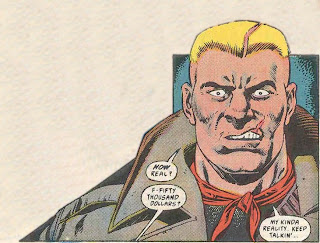 This is an odd little underrated tale.  Though this issue introduces a grand total of TWELVE Transformers, the real focus of the book is on the Roadjammers.  The three main Autobot victims get a bit of characterization, but the Decepticon Headmasters, the Firecons, and the other three Autobot prisoners get nothing.  The Roadjammers, on the other hand, get oodles of characterization.  We see each of them before they're forged into a team, then the birth pangs of their meeting, and finally them growing to respect and trust each other.  Burn-Out has an awesome design to him, but all of them are cool.  Making Skunge and Felix short in stature was a good choice, as was having Skunge as a third member with brawn instead of brains.  I also rather like the idea that Felix can keep pulling rabbits out of his hat to surprise Autobot and Decepticon alike.  One of the unfortunate aspects of the end of Bob's tenure as writer on Transformers is that they never got to return.  He was so good at recurring characters that I can only assume we'd have gotten a book-ended Roadjammers story eventually.  Simon Furman, of course, took the story in a much more cosmic direction that didn't have much of a place for this rather cool little team.  If you like humans, this is a pretty good issue.  If you think it should be TRUK NOT SQUISHIE, then this one probably isn't for you. 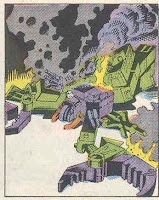 Delbo's art continues to be solid, with the occasional flash of something very clever.  I like his damaged Scorponok quite a lot, and most of his other original designs.  The three alphabet flunkies look suitably smarmy, and I already commented on how much I like Burn-Out's victory over Fizzle.  I can't even blame him too much for his terrible terrible Firecons.  After all, that really is what their model looks like.  Now, whomever drew those models .... you're ALLOWED to take some liberties with the toys.  Those guys could have been very cool, not weird square little boxes.  Ah, well.

Next month, it's a vacation at Club Con, with sun, sand, surf and the savage Seacons!  Nice alteration there, Bob!  It doesn't sound like much of an arc issue, but of course as the opening chapter to The Underbase Saga, it kind of is.  Ca$h and Car-Nage! was recently reprinted as the last part of IDW's  Classic Transformers Volume 3

Simon Furman, of course, took the story in a much more cosmic direction that didn't have much of a place for this rather cool little team.

This is an interesting observation. While I do love Furman's work, my main criticism at the time it was first coming out was very much this "cosmic" emphasis to the exclusion of the Earth-based stories. I know a lot of Transformers fans hate the over-emphasis on humans, but Budiansky often demonstrated that it can be done right, and it really did help ground the stories in something I could care about. I really found myself pretty bored by the (eventually) constant space-borne stories.

I still have this issue somewhere in storage. I really have a fondness for this particular story as well. I enjoyed the Roadjammers- particularly, Skunge and Felix. I would have enjoyed their return but alas, it never came to be. They were a formidable group in their own right, and I thought they had a ton of future storytelling potential.

This issue has been a personal favorite of mine since I was a kid.