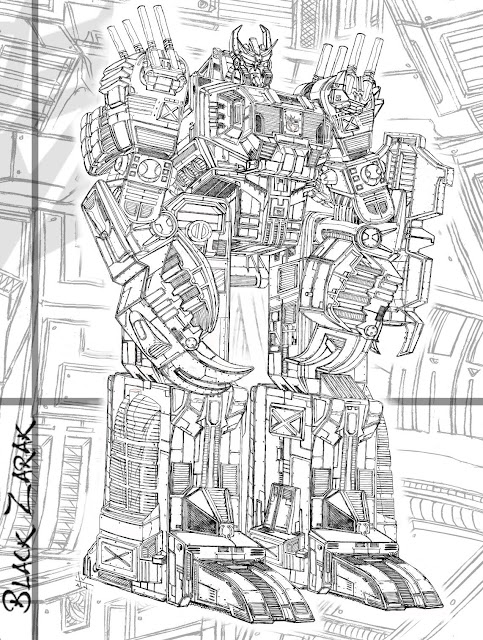 Well, it's been a little while, but this week Iván's Gallery returns with a lovely BlackZarka he's been working on for some time.  Here's what he has to say about it, and his absence:

Hi again! I regret having been offline for so long .. but first the work and sometimes health ... prevented me from drawing for a while... apparently, I suffered a nerve problem that made me sleep are the two arms ... so .. I could not do anything, and had a terrible pulse. I'm still not quite right ... but at least I can draw a little.
but I think it s glad to see what Jim and I bring you today.

We could talk much about this character... Zarak, repaint of Scorpnok, in Japanese Masterforce Tv. But, yeah, Zarak is an important characters in the series, houses the spirit of Devil-Z, Decepticon evil entity, it is possible that even more than Megatron. I always looked at Devil-Z as an antithesis of the autobot matrix. Masterforce really believe that it could make a great series, probably the best on transformers, and certainly a great comic, in all senses.

But, let's focus on Zarak, the truth is that the colors I like but the men of Scorponok, but the head design that I think is best. Reminiscent of a samurai helmet, logical, if we came from. But it is a pity that this very expensive toy ... (About 600 to 1500 dollars) was only sold in Japan. Besides .. always annoyed me a lot to Fortress / Grand Maximus was much higher than when it is assumed that Scorponok / Zarak was his antithesis .... is at a distinct disadvantage, not fair.

As also it is a shame that people unaware of both the Japanese Transformers universe, so .. we encourage Jim and IDW to edit a MTMTE book about Japanese characters.  We read, I hope soon.

Devil Z as the antithesis of the Autobot Matrix... that seems logical to me, I like it!

This was reflected in the ENORMOUS size of the file. Over 100MB of BlackZarak awesomness!

The detail is amazing Iván.