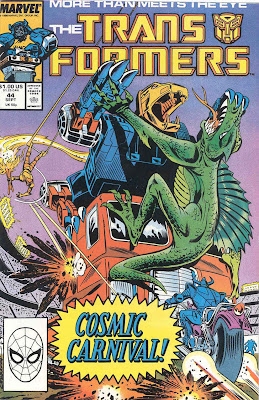 The Cosmic Carnival (what, no exclamation deserved?) is the forty-forth issue of the US G1 Marvel Comics run of Transformers.  Bob Budiansky returns as writer after the out-of-continuity hiatus last month.  Frank Springer also returns to the book, billed as a 'guest penciler.'  Presumably that means the filler issue last month was due to artistic scheduling difficulties.  Danny Bulanadi is the 'guest inker.'  Nel Yomtov, as always, is the colorist, and the regular letterer, Bill Oakley, is also back.  The cover is by Frank Springer.

It's a fine cover.  Sky Lynx rides Optimus Prime in truck mode, while they fend off the attacks of a giant lizard, a fire-chucking trapeze artist and a rocket-powered motorcycle.  The composition is sharp, drawing the eye to the apex.  Sky Lynx's claw breaks into the logo a bit, which emphasizes it nicely.  "Cosmic Carnival!" it states proudly, and it certainly looks like there's a nice big brawl at an outer-space carnival.  While I'm still dubious of the premise, the cover does its best to sell the idea. 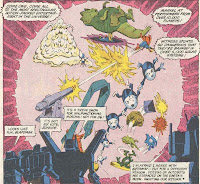 The book opens with a lovely splash of the exterior of the carnival, a "rippling serpent of cold, pitted steel."  Like most carnivals, these are nomads, moving from one locale to the next with their menagerie of performers.  Pinpricks of light shoot out in all directions, carrying advertising.  The advert interrupts some exposition on board the Steelhaven, where Optimus brings his new Nebulan allies (and the audience) up to speed on what's been happening in the book. The advert itself is fantastic, a wonderful version of an alien carnival that's both shockingly familiar (dude fired out of a cannon through rings of fire ... someone juggling weird objects with their feet) and yet appropriately alien.  Kudos to Springer for an excellent job on this.  Some of the Autobots want to go, but most realize that getting to the Autobots stranded on the moon has to take priority.   At least, until the advert shows Sky Lynx, who hasn't been seen in the book since issue 36.  Intrigued, they change course.


Inside the show, we get to see lots of aliens, both inside and outside of booths.  Only Optimus and Goldbug attend, due to lack of funds.  I'm actually a little surprised that Bob was allowed to just focus on his existing characters rather than introducing some of the 1988 toys.  Weren't there Decepticon Clones that needed to be featured, or Sixshot or Doubledealer or someone? If he wasn't going to be hawking wares, then this feels like a bit of a waste of an open canvas. Then again, I've got jaded 2010 eyes.  Clearly Bob is using this opportunity to do some house cleaning and tie up some loose ends, namely Sky Lynx and the human kids he rescued.  The human kids are being held against their will in a cage, being promoted by another human named Berko, who sounds like he should be a Headmaster partner himself. When Goldbug tries to just reach in to save them, he gets a nasty shock and Berko takes them to see the owner of the carnival, Mr. Big Top. 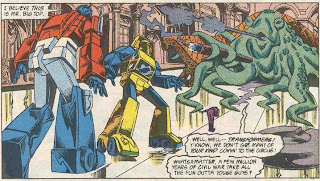 Mr. Big Top is actually awesome.  He's a giant tentacled monster with a giant cigar.  He speaks like a blue-collar thug, and he has a ready answer for all of Optimus' concerns.  It seems that Sky Lynx and the kids signed a contract and are here, if not quite willingly, at least legally. He ushers them out into the show, having blown them off but at least given them a couple of passes to the main show.  The main show is fantastic, with some great art from Springer in the three massive rings of performers.

Sky Lynx gets top billing, and his acrobatics are appropriately spectacular.  Optimus and Goldbug visit him after the show, and he relates how they saw an advert for the show and so stopped in.  They had no money and were asked to leave, but Sky Lynx agreed to perform to cover their admission.  Unfortunately, it looks like Big Top has no intention of ever letting them go, since both the kids and the Autobot have turned into star attractions. 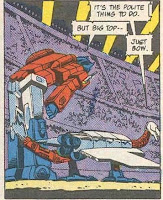 Prime and Goldbug go to say goodbye to the kids, but Prime turns things around by listening to Berko's story and offering to take him back to Earth.  Berko agrees, and comes up with probably the worst plan ever.  Optimus interrupts Sky Lynx's act by leaping into the ring, while Berko and Goldbug go to free the kids.  Optimus and Sky Lynx fight off the other performers and the crowd goes wild.  The egotistical Sky Lynx then insists that they take a bow.  It's the polite thing to do, after all. Big Top goes after Goldbug, who's full of humans.  He chucks the Volkswagen aside like a cheap toy, then grabs all his occupants (including the teddy bear Daisy) and threatens to rend them limb from limb.   A woozy Goldbug gets back on his wheels and accidentally knocks Big Top into the now vacant cage formerly occupied by the kids.  Berko locks him in and off they ride.  On board the Steelhaven, the Autobots pat each other on the back, while the multitude of strange-looking aliens mock the newest attraction of the Cosmic Carnival, Mr. Big Top. 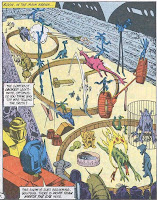 This is a mixed issue.  On the one hand, it achieves everything it sets out to do.  Bob wants to show us an alien carnival, and he succeeds admirably. Springer's art in particular works very well with this kind of story.  We get more aliens in this story than in any ten episodes of the cartoon.  We also get some very nice generic robots, during the exposition phase of the book.  It's also nice to get closure on what was happening with the kids, though one would have just assumed that they made it back safely absent any future stories.  The characters were fun, much larger than life, and the structure was solid.

On the other hand, most of the Autobots are trapped on the moon.  Ratbat has a working starship, and has significantly bolstered his ranks.  Scorponok also has a working starship, and has been shown to be setting up shop on Earth.  This story feels like a distraction from all of that. I don't begrudge Bob the opportunity to explore what an alien carnival might look like, though, as it's right up his alley and clearly everyone had a fun time putting it together.  Maybe I wouldn't mind so much if we didn't just have a horribly irrelevant filler issue.  Certainly issues 41 and 42 were momentous enough to warrant a breather.

Next issue, "Flash! Decepticon Skullgrin becomes Hollywood's latest movie star! 'Monstercon from Mars' premiers at a newstand near [me] in 30 days!"  It sounds like Bob is going to continue to explore the outskirts of the Transformers universe, rather than narrowing in on the core plot.  We'll see how that turns out.


Also, if you want the latest on The AllSpark Almanac II

(preorder it today!) , the good folks at Radio Free Cybertron were kind enough to interview me on their last show.  Give it a listen, then let them know what you thought in the comments section.
Posted by Jimtron at 7:19 AM

I always liked this issue, if only because Optimus Prime was finally back after a long wait and played a nice part in it (looking very much like his G1 cartoon model, too. No supermode in this issue).

I also like the use of colors on the cover, and remember thinking "this is a proper 'alien' issue of Transformers" as a kid. I remember being thrilled by this cover and the cover to Headmasters # 1 more than anything.