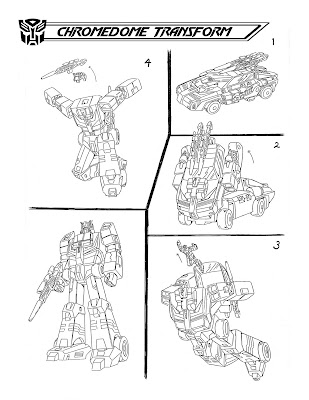 In honor of Brian's triumphant return to the blog, reviewing the Headmasters series episode by episode, I thought I'd post a nice Headmasters model this week. And who could be more Headmasters than Chromedome?

It's kind of funny. In America, Chromedome is a hoity-toity intellectual. His name means 'bald', though I suppose with Transformers the more literal interpretation of the metaphor makes more sense. In Japan, though, he's the hotheaded youth, struggling with his future destiny as a leader of men, er, bots.  That's a common archetype in Transformers, especially the Japanese original series. All in all, I think I prefer the boring American version. At least it's different, and at least his name makes sense.
Posted by Jimtron at 9:59 AM