Hello there, everyone! Matt "Monzo" Karpowich here. You might know me from my involvement with the Obscure Transformers Website, the "Stump Monzo" segment of Radio Free Cybertron, or the violent death of Skids in I, Lowtech. 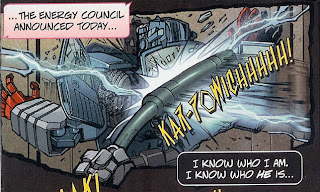 (Okay, knowing that last one is low on the likeliness scale, I admit...)1

I haven't had an opportunity to post at Disciples of Boltax since Jim kindly introduced me weeks back, and I'm sorry for that. I wanted to kick this off with something unique, but I've been distracted in my Transformers-related research efforts of late. However - you knew there was going to be a however, right? - what I've got for all of you now is, I think, pretty neat.

The distant, misty days of the year "2002" ushered in a new era in Transformers history as Transformers: Armada hit North American toy stores in force. The first offerings from Takara's version of the line, rechristened Transformers: Micron Densetsu,2 weren't released in Japan until the tail end of the year. To help promote the launch, a special promotional video was given away with the December issue of Koudansha's "TV Magazine", long a home to original Transformers content. The tape has shown up for sale at various BotCons in the past, which is where I purchased my copy.

I get a kick out of the fact that Convoy's mouthplate moves in this little featurette, which it never actually did on the show itself. Some of the '70s super robot-style music they use is pretty groovy, too.

1You might also know me from the front of Transformers Universe Onslaught or as the basis for Acid Storm. I, ahh, get around...

2"Micron Densetsu" is usually translated as "Micron Legend" in the West, but author Hirofumi Ichikawa rendered it as "Legends of the Microns" in English when writing the "Linkage" series.
Posted by Monzo at 1:45 AM