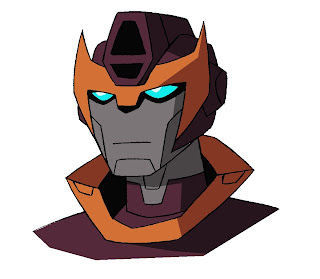 One of my loyal readers brought this to my attention, so I guess it's safe to share it with the world.  The AllSpark Almanac II

is now being solicited on Amazon.com.  220 pages, by Bill Forster and myself. I don't think I'm giving too much away to say that it will cover season 3. Here's the solicitation text:


Transformers Animated is the most whimsical Transformers series ever. The AllSpark Almanac II captures that magic with a wondrous examination of this amazing universe. This 220 page volume is packed with behind-the-scenes sketches, interesting facts, production artwork and musings from the characters themselves. Relive the thrill of the final season of Animated and learn what might have been had the show continued. Explore the metallic plains of Cybertron and meet its colorful denizens. Discover more about the action-figures that accompanied the cartoon. Hard-core fans and neophytes alike will find this an essential tome. You won't want to miss it!

Now that the cat's out of the bag, I'd love to see a massive number of preorders of this thing. The higher this baby goes on the Amazon charts, the more likely I am to be able to keep making books like this. After all, there is a whole 'nother series that's recently been announced.  (The Transformers: Prime Primer? Nah, that's terrible, but I'll have plenty of time to come up with a cool title.)


Some updates - most of the Transformers sites have posted news items about this, as well as discussion forums.  So far we've got robust discussions going on on Seibertron, The AllSpark, TFW2005, and of course the IDW Forums. Man, good times!
Posted by Jimtron at 2:48 PM

This is awesome news, Jim! Yipee and congrats!

In addition to your in 'universe writing' - which was so awesome and fun - I'd like to humbly request that you include proportionally more behind the scenes info about the making of the series.

Personally, I would love to hear lots of quotes from the artists and writers throughout. The more you can get Derrick to talk about his design inspiration for each character the better. His designs reach back into TF history and I'd love to know more about the artistic/historical legacy perspective.

I enjoyed this aspect in the last book, but found the proportion of "the making of" stuff too few and far between, when compared to the in-universe stuff.

Again congrats on the new book! Can't wait to buy this!

This is wonderful news, Jim ;)

HOORAY!!!
Can't wait for this.

I'm really hopeing it has more of the character sheets on all the other characters created and any that didn't make it to screen.

Soooo excited!!! Soooo excited!!! Can't wait 'til this comes out. The first was amazing and I'm sure this one will top it! I'm hoping to see some stuff on Tram Charr, especially Strika!

Awesome!! I enjoyed the first one and I'm hoping to see some of the S3 background characters in the new book (Cosmos, Flipsides, Grandus, etc.). Well, off to Amazon I go.

Hmmm...how about "The Prime Directory?"

Going to do another signing? ;D

Thanks to everyone for the enthusiasm.

Sam, Caitlin, Shawn, Jeff, I think you'll all be happy with the book. Lonegamer, I'll do a signing if there's interest.

*My* question is: will you be offering another autographing opportunity at a local comics shop?

I loved the first Almanac and I look forward to adding this one to my collection. Will we see Blackarchnia without her helmet in this volume ?

YAY!!
Within 2 minutes of finding out about it i went and pre-ordered it.
i'm gonna be sitting in front of my mail-box from now until it gets here.