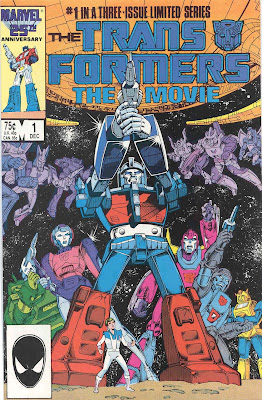 August of 1986 saw not one, not two but three Transformers comics published. Two I've reviewed already, #23 (Decepticon Graffiti!) and Transformers Universe #1 (as part of my review of the whole miniseries). That brings us to #3.

The summer of 1986 saw the release of the first Transformers Movie. Naturally, to capitalize on the publicity and interest surrounding it, there was a comic book adaptation. This three-issue miniseries was written (well, adapted) by Ralph Macchio, who also wrote the first issue of the Marvel Transformers G1 comic. Art is by Don Perlin, inks by Ian Akin & Brian Garvey, colors by Nel Yomtov, and letters by Janice Chiang. The editor of record was Bob Budiansky, ensuring that he was at least aware of the material to inform his run on the ongoing.

An aside: some 20 years later, Bob would revisit this material again when he scripted IDW's Transformers: The Animated Movie adaptation with the incomparable Don Figureroa. That one was much more faithful, featured beautiful art AND added a two-page spread showing the gestalts at The Ark during the battle for Autobot City. Well worth checking out.

But back to the matter at hand. I can't imagine that anyone reading this blog is unfamiliar with the story of The Transformers: The Movie. Still, it's worth highlighting some differences. With only 70 pages to work with, Macchio had to truncate many memorable sequences. The attack on Autobot city, the first confrontation between Kup, Hot Rod and the Sharkticons, the Junkion attack on the Autobots, the Autobots strugle against Unicron's internal defenses, the Decepticon attack on the shuttle, all excised or cut extremely short. 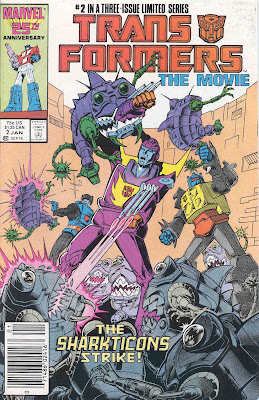 Some key characters got very little time to shine - Kup and Blurr were both reduced to mere background ciphers, with Blurr getting only one panel of dialogue. Prime and Megatron battled without interference from Hot Rod. Grimlock wound up with Kup and Hot Rod on Quintessa. Oh, and Galvatron goes out of his way to make sure all the Decepticons KNOW that he used to be Megatron in typical awkward-comic introductory style.

Also, this comic was probably created from early materials. Many early movie ideas and designs were used. Unicron dissolves planets with gas before consuming them, instead of mechanically breaking them apart. Spike has a different space suit design instead of his Exo-Suit. The planet Junkion is fitted with large rocket boosters, making Wreck-Gar's line about the Junkion planet being a 'sleek, sexy import with turbo handling' make a lot more sense. The character designs for most of the characters are earlier versions, many of which featured in The Ark book. The Matrix is a different design as well. Instead of running for a ship, Kranix himself transforms into a space ship. Rather than get shot down by Decepticons, the Quintessons themselves bring down Hot Rod's shuttle with some kind of giant mechanical claw. Ultra Magnus gets quartered by Sweeps with energy beams, an awesome scene. There is no battle for Decepticon leadership within Astrotrain. That's a good smattering of the differences, though by no means is it a comprehensive list. 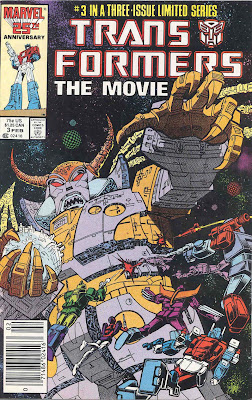 It's interesting to think about the intended audience for this book, readers of the Marvel Transformers series. The idea of Optimus as a Matrix carrier is familiar to comic book readers, making this aspect of the plot somewhat less jarring. Of course, it wasn't thought of as something corporeal, but even that tracks well with Megatron's assertion that the Matrix died with Prime.

Overall, what can one expect from these three issues? Competent Perlin artwork, not much of which stands out. The story itself doesn't hang together much - the characters get shuttled from place to place in an almost random manner, without the frenetic energy that animation can provide. It doesn't really stand on its own.

So, is it worth checking out at all? I'd say yes, if only to get some insight into some early designs and concepts from the movie. Certain scenes and lines in the theatrical release make more sense when one keeps the earlier ideas represented by this book in mind. Why would Ultra Magnus break into pieces from laser bursts? The quartering makes more sense. Why would Wreck-Gar say the Junkion planet was a ship? Well, originally it was supposed to be.

But as a stand-alone comic read, I can't in good conscience recommend these issues. They actually have been collected together in the UK as a winter special with a card cover. I'd be interested in picking it up if I ever stumbled across it. They haven't been released in the US since their original publications.
Posted by Jimtron at 10:17 AM

Too bad new adaptation lacked deleted scenes... that would had made it an ultimate TF:TM adaptation.

That and correct speech clouds...

This was released in Holland as part of the regular comic book. Imagine how confused everyone was when the timeline suddenly went from 2005 to 1985 but Optimus Prime was still dead due to the events of these issues... (the regular issues in which Prime and Megatron bite the dust were skipped). Anyway, it always amazed me how Don Perlin could draw both the regular series and the movie adaptation at the same time. Ian Akin and Brian Garvey had it even worse, they inked the regular series, the movie adaptation AND the Universe series! :)

I always hoped Titan would reprint these together with the Universe series in one Trade. But since IDW is reprinting the original comics now I suppose they probably lost the license. I do prefer the Titan reprints though, as they are from the UK and were able to reprint all the stories, including the ones with appearances of Marvel characters like Spider-man and Circuit Breaker...

Also of note in these issues is that Optimus Prime can be seen in the "war room" in issue #1. I once saw the design for this by Floro Dery, but it never made it into the movie. He was staring at generic viewscreens instead. The war room had a globe-like terminal.