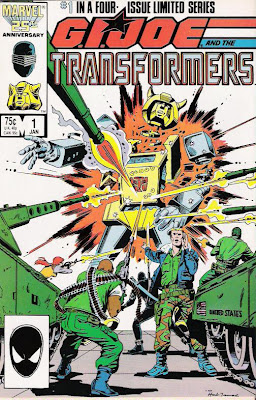 September of 1986 featured not one, not two, not even three but a whopping FOUR transformers comics released. The movie adaptation and the Universe profile books (#2 of each) have already been covered, which brings us to Blood on the Tracks (note the shocking lack of an exclamation point), the first of the four issue miniseries. Newcomer Michael Higgins wrote the issue, with the familiar Herb Trimpe providing pencils. Inks were by Vince Colletta, colors by Nel Yomtov and letters by Joe Rosen. Herb Trimpe also drew the cover.

And an excellent cover it was. Bumblebee, a fan favorite, is blown apart by the Joe team, guns blazing. It makes the mini-series seem like a must-have, at least for Transformers fans. The lack of a background puts the emphasis squarely on the characters, and the explosion effect and bullet holes just look terrific. One looks at this cover and asks, how could such a thing happen?

Unfortunately, the answer is 'quite slowly', with a number of plot holes along the way. General Hawk and a senator drive past a throng of protesters to see the technological macguffin of the series, Power Station Alpha. PSA is a mobile transforming solar/nuclear power plant, which immediately raises the question 'why'? It seems that the senator, Barbara Larkin, is the patron saint of the project. She's also got a bit of chemistry with Hawk. Not everyone is marveling at the technological wonder, though; some people are concerned that it could fall into the wrong hands. Amongst the concerned, one Optimus Prime. He's worried about the threat posed by Megatron (issue #23 is referenced as the reason why ... maybe the Battlechargers DID write out a challenge to Optimus Prime amidst their vandalism spree) and so dispatches Bumblebee to observe.

The Decepticons aren't the only threat to the station - the Dreadnoks decide to try to seize it themselves, though the unexpected presence of the Joe team thwarts them. Their attempt gives Megatron ideas though - why not have Bombshell take control of PSA with his cerebro shells? Bombshell plants a cerebro shell into a human, and then has him walk in front of the station, forcing Bumblebee to break cover. It was almost the perfect plan, except that he inexplicably circles around Bumblebee and alerts the Autobot to his presence. Bumblebee radios for backup, prompting prime to dispatch the (presumably newly rebuilt, following their ordeal at Circuit Breaker's hands) Aerialbots. Still, break cover Bumblebee does, which saves the boy's life, but prompts some panicky humans to blow him to smithereens even as Bombshell enters the station. With Bumblebee in pieces, five jets converge, combine, and inform the humans that they've come for their ally.


I want to like this book, I really do. The Joe team feels like a much more natural element for the Transformers to interact with than the Marvel superheroes ever did. Still, it just doesn't hold together. Why build a giant flying nuclear/solar power station? What's the advantage? It's relatively cheap to move energy around on the grid, so unless they're thinking of this as some kind of military thing, I don't get it. Even then, one would think that it'd be bristling with weapons, and it isn't. The Joe team blowing up Bumblebee after he clearly saved the boys life didn't ring true either. Trimpe's art is better than usual - I think having all those humans to draw helped give him some new energy. It could also be a different sort of script than he's used too ... nothing like Bumblebee's windshield-face will ever show up in any of his work on the main book. The little attempts at continuity are nice, but backfire a bit - the miniseries becomes almost necessary instead of merely nice to have. For a necessary part of the narrative thread, it's disappointing.

Blood on the Tracks (still no exclamation) was reprinted in a collected volume with a nice new Andy Wildman cover, but that volume has since fallen out of print. As it's one of the weaker Transformers tales, this isn't a great tragedy.
Posted by Jimtron at 10:32 AM

Don't get me wrong, Bumblebee is one of my favorite characters- but that cover is great. It's too bad the contents of the issue didn't live up to the cover. With respect to all involved- as a fan of both franchises, I was always a little disappointed with this story arc.

Maybe my young mind had ramped up my expectation levels past anything reasonable, I just thought their were so many other really great ways they could have exploited this idea.

It's a congressional pork-barrel boondoggle. It doesn't have to make sense.