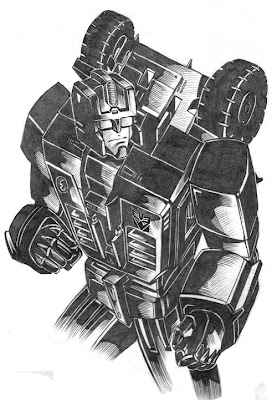 What a kick-ass episode of Transformers: Animated this weekend! It heavily featured two of my favorite characters, Sentinel Prime (whom I often Twitter as), and Swindle. Swindle is especially fun, since he was one of those G1 characters who unexpectedly managed to shine. In honor of Decepticon Air, a piece from our resident artist Iván. Here's what he has to say about Swindle:

One of the characters I liked best when I was a kid. And I remember that it was the toy that cost me more to be able to find a form Bruticus. I keep a great memory of him.
A detail I liked was that its two weapons are combined to form one. I keep a couple of them in the boxes and two others to "play." But in general all Combaticons I liked a lot.
That´s all....

Nice piece - the Combaticons were the only combiner team I had as a kid and I think Swindle might have been the last one I needed as well.

Does anyone else wonder why he tolerates that name for himself? You'd think it would hamper his line of work quite dramatically.