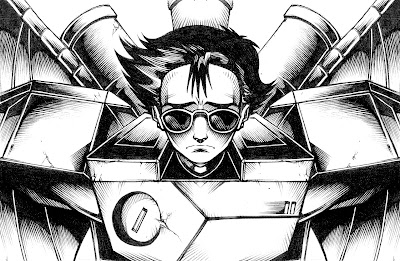 After talking about how much I like the character Clouder, Iván decided to draw him up for this week's edition of Iván's Gallery. Here is what the artist has to say about the character:

Clouder is one of the most interest characters in Masterforce series. Is a repainted version of Doubledealer. But in the series , as we know, is a character at the beginning of the current side Decepticon.


Certainly I don't know which of the three changes I like more. I loved their Decepticon armor, though I cannot understand why it's a bat, I still love it. When I was a child I disliked that "nerd" aspect of who the human component was in Masterforce, but I confess that just my taste. But now I think it is a tremendously profitable choice in many ways.

I absolutely LOVE your rendition of Clouder!