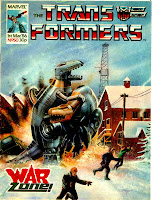 Apologies for the lateness of this review. I am still trying to adjust to having something approaching a job.

The Dinobot Hunt concludes with a fourth part written by Simon Furman, pencilled by Barry Kitson, lettered by Annie Halfacree, coloured by Stuart Place and edited by Ian Rimmer. The superlative cover was by John Higgins, who went on to colour such little-known works as “Watchmen” and “The Killing Joke” for some hairy bloke called Alan Moore.

The cover in question shows Grimlock, our remaining free Dinobot, locked in mortal combat with Sludge, who has been a prisoner of the Decepticons since Part 2. Humans flee from the scene as the battle causes a gigantic explosion that leaves the Dinobots unmoved as they concentrate on tearing one another limb from limb. The toys have clearly been used here as the model for these characters. Grimlock has a hinge on the back of his neck where his dinosaur head folds back to reveal his robot head and the lump where the cockpit for the Diaclone pilot used to go is clearly visible. However, any awkwardness and stiffness associated with the toy models has been removed. Sludge in particular is battling in a very animated fashion, and the rather busy, circuit-covered surfaces of the toys have been smoothed to an attractive brushed-metal look, somewhere between the toys and the flat colours of the cartoon.

We open with scenes of despair and misery. Doonstown, a remote Canadian town, has been levelled. Survivors stare blank-eyed in shock from the burning remains. Over scenes of this devastation, complete with wrecked Autobots, we hear Sideswipe’s narrated report to Optimus Prime. Sideswipe wonders if his transmission got through to the Ark, as one of the Dinobots had chewed through the fuel line of the shuttle and blown him up. We see Prime’s shuttle, complete with Bumblebee and Ratchet, take off from the Ark and then see Sideswipe, look

ing very wrecked, near shutdown, in keeping with his shock appearance at the end of Part Three.

Over the page is a full title page splash of Grimlock and Sludge chewing on each other, and it’s magnificent. I don’t like it as much as the cover, which has more polished looking colouring, but this is a terrific, dynamic, visceral piece of art that really captures the violence of the encounter (complete with tiny flying human casualty).

Not really paying attention to the terrain, the two Dinobots go tumbling off a cliff and smash into a frozen lake, while Soundwave and Scavenger look on and talk about being impressed. Soundwave congratulates the Constructicon on a mysterious piece of equipment that he has built - this must have something to do with Sludge, who is now free. Scavenger says that he has rigged a “nasty surprise” for anyone who tries to tamper with it. At that moment, Skywarp returns and tells Soundwave that he has found a small oil rig to bolster the Decepticons’ fuel supplies. He has also spotted an Autobot shuttlecraft approaching, probably containing Optimus Prime (spoiler: it does contain Optimus Prime). Everything in Soundwave’s plan seems to be falling into place.

The Autobots land and Prime sends Bumblebee to investigate how Sludge comes to be in Canada when he should be in California. He then takes it upon himself to keep the Dinobots in the water (“Or... DIE in the attempt!), while waiting for Prowl’s arrival in another shuttle.

Bumblebee is busily scanning for energy readings. He has found a big one, but can’t figure out what it is. Then the notion hits him to use one of his “other eight senses.” He tries audio, filtering through the subsonic ranges and detects a blast of sub-sonic energy so strong and painful that it knocks him down. He configures his scanner (the P.E.T (portable energy trace) to find the source of the sonic, and is visibly shocked by what it detects.

Meanwhile, Prime is blasting at Grimlock and Sludge, forcing them to stay in the lake, where they are relatively harmless, except to each other. Prowl’s plan depends on them remaining put, but it all goes awry when Prime’s gun overheats, and explodes in his hands. We switch to Prowl, in the cockpit of his shuttle. He changes the shuttle’s electronics so that they are all transferred to the outer hull and points the ship in a collision course with the lake. Prowl leaps out just in time as the electrified shuttle smashes into the water and scrambles Grimlock’s circuits, knocki

ng him unconscious. Unfortunately, the loss of Prime’s gun means that Sludge has got to shore and is unaffected by the crash.

We get a glimpse into Sludge’s simple thought processes. He wonders if, as Grimlock is defeated, he should lie down and rest, but suddenly he is gripped by intense agony, and driven into a rage, heading straight for Optimus Prime!

We cut to Bumblebee, and find out what he has been doing for the last few minutes. He discovered that the source of the mysterious sonic energy was an Autobot shuttlecraft (specifically the one that the Decepticons captured in Part 2). He found Cliffjumper, Windcharger and Gears captive within and, even worse, a Decepticon weapon called a “sonic lance” that was being used to enrage Sludge. Rather than simply turn it off, Bumblebee correctly reasoned that there would be a trap, and, after rescuing the Autobots, blew the shuttle up with a blast from his weapon.

The destruction of the sonic lance breaks it’s hold on Sludge and he falls unconscious. Ratchet has been tending the wounded Bluestreak, and he does not highly rate his chances of recovery.

The Decepticons are pleased. While the destruction of the shuttle means that Sludge is no longer under their control, they have managed to cause several Autobots to be severely damaged, and steal a significant quantity of fuel. Soundwave goes into full on supervillain mode again, ranting at the Autobots, “Your Dinobot Hunt is over! And once more it is the Decepticons who emerge triumphant!”

“Dinobot Hunt!” ends with a bang and yet I find myself curiously unmoved. The only genuinely poor part of this story was Part Two, for reasons that I explained in my review, and Part Four was well written and exciting, with great action and a convincingly sombre ending - very unusual for this comic. With this in mind, I can’t quite pin down what I find so uninspiring about this story. On the surface it seems to have all the elements of a proper epic, and I can’t really fault the writing, or the art, at any point, but I just can’t summon up any enthusiasm for it.

Perhaps the problem is that the premise for the story is set out very early on and the whole thing is a little episodic, but then, once the Decepticons get involved, things get less predictable, and their plan does actually make a certain amount of sense, (although there is absolutely no reason why they wouldn’t have rendered the captured minibots irreparable).

So I apologise, I can’t explain why this story really doesn’t click with me. I think that objectively it is a perfectly decent Transformers story, even to the extent that it should be praised for doing some things extremely well, but as I reread it over and over in order to understand this review, I’ve come to realise that it will never be one of my favourites.

Nonetheless, it would be very remiss not to give the story praise where it is due: I think throughout the four parts, Furman really helps build the Dinobots up as an unstoppable force of nature that cannot be allowed to roam unchecked. In Part Four we really see this up close, as the small force of Autobots in Doonstown, which includes Optimus Prime (no slouch in combat) cannot hope to defeat Grimlock and Sludge without drastic measures from Prowl.

I think my problem is that no character really gets a time to really shine. It is ostensibly about the Dinobots, but they are mindless brutes throughout this story - plot devices rather than characters, and each part stars different Autobots, who just do what Autobots do - heroic things. Remember these are UK issues, only eleven pages each, so with this approach, each character has a bare minimum of "screen time". Ironically Part Two probably has the most exploration of it's central characters, and I find it to be fairly badly botched. Soundwave comes across as a capable leader of the Decepticons (he even has the ranting down) but does not get much time to really show us what he can do. In the end, what has changed? The Decepticons have some oil, the Autobots are defeated, but will be repaired, and, crucially, the Dinobots have been recaptured. Prime's dour mood is certainly justified, he was badly outmanoeuvred, but the reader is left with no real reason to think that the Autobots are really in any long-term trouble here.

In any case, vague criticisms aside, the art has been great throughout, and Part Four is especially good. I pretty much like any extended look at the Dinobots in dinosaur mode, and the fact that they are trying to chew each others’ faces off just makes it all the better. The panel where Soundwave waves his fist and loudly taunts Prime is also a great depiction of the character. Kitson knows what he is doing with the Transformers by this point and his style has definitely helped to make the UK book look different from it's US counterpart. Place's colouring is likewise very good and I am fairly sure that there are no mistakes in this one.

Anyone who has not read "Dinobot Hunt!" really ought to. I don't especially enjoy it, but you can't let that put you off, it's an objectively decent story and seems to be pretty popular. Luckily, it's not too hard to get hold off these days, you can find it in IDW's "  Transformers: Best of the UK - Dinobots

" Trade Paperback, which is still readily available from Amazon and other merchants.
Posted by Bishbot at 2:46 PM

One of the things I really enjoy about these blogs is the fact that I get to see issues, cover art, etc. I've never seen before. It's very cool. It's a shame some of these issues have never been experienced by more people. Whether or not the story's were good, it's still kind of nice to see them here.

Well, as I said, it can be yours for not too many of your dollars. Transformers has done quite well with reprints really.

We all have our opinions i know, but i am surprised by your lack of enthusiasm for this book! I LOVED it! In fact, so much so that i used this cover as my showcase for TF:UK.
But not just the artwork-i think Soundwave makes the best Decepticon leader (of the '84, '85 characters)To me, his plan was flawless. I think he left the 3 minibots intact so that if the Autobots didn't detect the thoughtwave that controlled Sludge, they might detect the ship and try to free their comrades which would set off the explosion.

Also, i personally disagree about the episodic element not letting characters shine. To me this series showcased Gears and Windcharger better than any (except maybe the Windcharger/Ravage teamup-but then again, here is shown interacting with fellow Autobots and not in an uneasy alliance with an enemy) I also liked how Jetfire was shown in his first command.

Overall, i always loved this series the second best of the first hundred issues (best being Target:2006). But again, we all have our opinions. I didn't like "Shooting Star" too much, and you did.