Zob's Thoughts on Revenge of the Fallen Autobot Wheelie 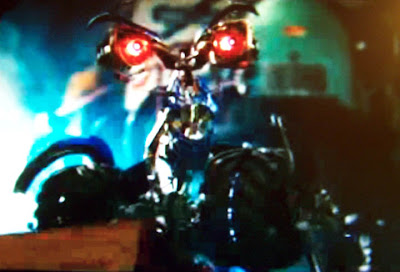 Note: This review contains minor spoilers for the movie Transformers: Revenge of the Fallen, specifically the scenes in which Wheelie appears. If you're the type of person who just got angry that I told you that Wheelie will be appearing in the movie, I strongly suggest you stop reading now (and probably stop surfing the Internet for a bit, while you're at it). If you're like me, though, and you want to soak up as much as you can about the movie before its theatrical debut in just under a week, then by all means—continue on!

Wheelie is a tiny little robot gremlin. A self-described scrapmetal drone who takes the guise of a toy radio-controlled car in order to gain access to a surviving fragment of the Allspark cube, he initially has an unpleasant confrontation with Mikaela, but eventually comes to respect and admire her so much that he defects from the Decepticons and professes loyalty to her instead. The toy is part of the second wave of Deluxes and ships with the likes of Chromia, Skids, and Smokescreen (the redeco of Jazz).

Autobot Wheelie, as Hasbro calls him, comes packaged in robot mode—a practice that seems to be popping up more and more lately. I don't think this is done at random, but the reasoning for it seems to vary. (The Fallen , for example, is probably in robot mode because his vehicle mode is one of those indistinguishable Cybertronian things.) In Wheelie's case, his vehicle mode is scaled smaller than a lot of the other Deluxes; even though his wheels and undercarriage constitute nearly half his mass, he's deceptively small. Take that away, and he looks like a Scout-class toy. It's understandable that Hasbro wanted to showcase his largest and most imposing configuration, if only so kids didn't feel like they were getting ripped off in paying twelve dollars or more for such a tiny vehicle. Packaging him as a robot also has the added benefit of presenting him in his most recognizable form, as kids who see the movie will undoubtedly recognize the foul-mouthed little Decepticon on sight 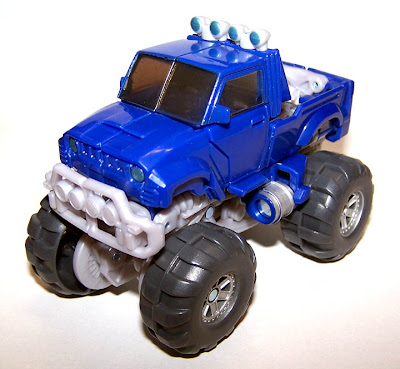 As a vehicle, Wheelie is a little more than three and a half inches in length and just under three inches in height. His oversized monster truck wheels add a lot to his size and help to make him nearly as tall as he is long. (We don't get monster trucks in the toy line very often. He reminds me a great deal of Micromaster Mudslinger.) Wheelie is notable as one of the few Transformers toys that turns into a scale representation of an object—he doesn't turn into a full-sized car; he turns into a toy car, making the Hasbro version of him an example of life imitating art. Wheelie's toy isn't life-sized—he'd need to be a Leader-class toy to be the size in which he's depicted in the movie—but he's closer than the rest of the current Revenge of the Fallen product offering. His wheels roll freely (and true to his name, he can indeed pop a wheelie) but due tho their enormous tread pattern they actually work a lot better on carpeting than on flat surfaces. As mentioned, he's got a lot of undercarriage junk tucked under and behind his wheels that spoils the illusion a little, but other than that, it's a fairly convincing disguise. (Surprisingly, all the undercarriage stuff stays pegged in its proper place very nicely.) He's even got an open truck bed, a comparative rarity in transforming toys, though parts of his robot face are quite plainly visible inside the bed.

His transformation is complex and not very intuitive. A lot of movie toys just sort of explode into their humanoid form, with armor panels and dangly bits hanging everywhere, and it's far easier to start with the comparatively compact vehicle form and then unfold it a piece at a time than try to begin with a robot whose limbs are already pointing every which way and try to figure out how to fold him back up into a vehicle. This is an instance where some detailed written instructions would have been enormously helpful, since the wordless pictorial illustrations don't always convey precisely what you're expected to do. For those of you bemoaning the tired old transformation schemes we've already seen dozens of times, though, you're in for a treat since the act of transforming Wheelie is an entirely unique experience. Essentially, he lays on his back and his arms and legs retract underneath him, but this is a gross oversimplification of a process that took me multiple tries to fully master. 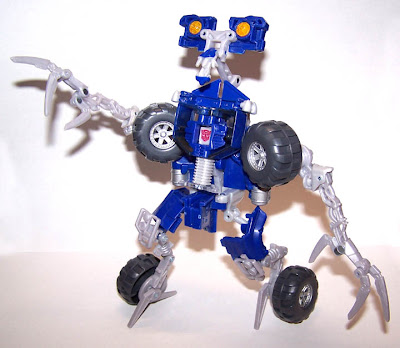 As a robot, Wheelie is nearly eight inches tall, gaining most of his height from his crazy, spindly legs and neck. It's difficult to describe his points of articulation because his design doesn't really match up with human anatomy, but he's got four independantly-moving joints in each leg and three in each arm, plus articulated claws and fingers, to achieve a wide variety of poses. The character rolls around on two wheels in the movie, but the toy is equipped with heel struts that enable the toy to stand up unsupported. He's also got three neck joints, all hinges, that allow various degrees of up-and-down movement but no side-to-side rotation. Close examination of his face sculpt reveals that he's got two differently-styled optic sensors, presumably as a nod to the scene from the movie in which Mikaela attacks and maims him. (His eyebrows are likewise sculpted differently, creating the effect that he's got one evil Decepticon eye and one sympathetic Autobot eye. Too bad they aren't colored differently like they are in the film.) The toy has no weapons, and only has a single gimmick to his name—rotate his crotch knob and you can switch his faction symbol from Autobot to Decepticon. That's it. Nothing spring-loaded, no Mech Alive gimmick, and no other action features.

Toys based on characters from the movie franchise are unlike any other Transformers toys ever designed. Wheelie embodies that design philosophy to a tee—which means you're likely to either love him or despise him based on your feelings about the other movie toys. He's got pretty much the same design aesthetic as Frenzy from the first movie, but Frenzy never really got a good transformable toy (the only version that actually turned into a CD player was the extra-chunky, kid-friendly Fast Action Battlers edition). I anticipate Wheelie being the comic relief character of the movie, so his popularity—and thus the demand for his toy—will no doubt soar enormously following the release of the film. If you're on the fence about him, you'd better grab him now before he gets scarce.

the toy does look awfully lego-ish. And i wonder if he's as capable of leg-humping as in the film...