Zob's Thoughts on Revenge of the Fallen Deluxe Bumblebee

When it comes to collecting toys from the Transformers live-action movies, I only buy toys of the characters who actually appear on-screen. Therefore, I consider my 2007 movie toy collection more or less "complete" despite not owning off-screen characters like Wreckage, Swindle, etc. I had originally sworn off buying any of the Revenge of the Fallen toys based on character I already owned, since it seemed silly to keep buying Optimus Prime and Ironhide and friends all over again just because there's a new movie coming out. That said, the first time I saw Bumblebee in the store during the weekend the Revenge of the Fallen toys broke street date, I couldn't tell right away whether or not it was the same toy I had at home or something brand-new. The head sculpt, in particular, convinced me to buy the toy since I knew for sure I'd never seen it before. Of course, after I got him home and did a comparison, I realized it was, indeed, pretty much the same toy, with some minor alternations. I thought about returning it since I hadn't opened it, but I liked the new head sculpt so much that I ended up keeping him. 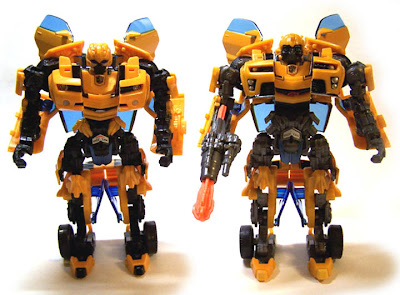 Bumblebee was one of the only toys that was available prior to the May 30th release date; he and Soundwave were available for order on hasbrotoyshop.com several weeks prior to the street date, making them this year's equivalent of the "sneak preview" protoform figures that were released in 2007. They are the only two Deluxe-level toys from assortment who are packaged in robot mode instead of vehicle mode. (There's probably another reason for that besides being an attempt to distinguish the sneak preview toys from the rest of the assortment. As a Cybertronic satellite, Soundwave is the only Deluxe-level toy that transforms into something completely indistinguishable and unrecognizable—everybody else turns into realistic cars and jets and things. Bumblebee turns into a regular ol' car himself, but in vehicle mode, he looks exactly like his previous release two years ago, so packaging him in robot mode was a savvy way of showcasing the mold differences and convincing kids to get this toy. (Starting the toy off as a robot necessitated an entirely new instruction booklet, though they did recycle some of the illustrations—they're just in a different sequence.)

Bumblebee's vehicle form is actually a slightly modified version of the original toy. When the 2007 movie was under development, the decision was made to base Bumblebee on the fifth-generation Camaro Concept intended for the 2009 production year. Now that it actually is 2009, though, the producers went in a slightly different direction and made Bumblebee a 2010 Super Sport, which is similar to the concept version but with a larger front intake and dual fog lamps. Hasbro altered the toy's design to more closely match the updated vehicle design; the changes are largely cosmetic (they also tweaked his wheels a little), though the slightly bigger front bumper doesn't rest as snugly against his body in robot mode as the previous version, so his chest juts out a little more than it used to. (Note that Hasbro still refers to the vehicle mode as a Camaro Concept on the packaging.)

Another change Hasbro made was to replace Bumblebee's original handheld weapon—a cannon that converted into a blade, which detached and stored between his legs in vehicle mode. This time, his armament is fully integrated into his design, replacing his right hand altogether. (This is actually more accurate to the films, in which none of the Transformers carry accessories—their various blasters and swords and things are part of their bodies, and are usually created by transforming their arms into their weapon of choice.) The toy's entire forearm is essentially a missile launcher, and comes equipped with a bright orange "pulse missile" whose prototype was shown as translucent on the back of the package, but realized during production as opaque orange plastic. Even though his entire forearm has been hollowed out to make room for the missile, though, somebody must have made a slight miscalculation because it doesn't fit very well when the missile is loaded. The butt-end of the missile presses up against the inside of the chamber, which interferes with the potential launch distance by a considerable margin. The launcher is actually designed to rotate inwards, but while this eliminates the friction problem with the missile, it puts the launcher at an awkward angle with respect to Bumblebee's arm. (The actual reason it rotates is so that it can rest between both his arms for storage in car mode; the missile juts out from underneath the rear bumper, nestled right between his twin exhaust pipes.) The launcher is held on with a tiny little knob and pops off all too easily.

By far the most troublesome change, though, is actually the smallest—and at first, the least noticeable. There's a little plastic tab on each of the armor panels on Bumblebee's upper legs, which are designed to fit into the little slots on the other half of each fender and help lock the vehicle mode together. It looks like somebody decided to tweak that part of the toy's design, too, and altered the size and shape of the tabs, even though there was no real reason to do so. I didn't find out about this until the first time I transformed the toy and snapped one of the tabs clean off in an attempt to fit it in the slot. Suspecting I just ended up with another defective toy, I traded it out only to find that the second Bumblebee I bought had the exact same problem. As it stands now, the new tabs—particularly the one on the rear left quadrant of the car mode—is too thick to fit easily inside the slot it was designed for. There's an old saying that goes, "If it ain't broke, don't fix it," and I find it to be more than applicable here. Unless you're careful, the tabs will snap off the first time you transform him to car mode. You'd probably be best off snapping off the tabs deliberately, or at least whittling them down, due to the way they interfere with his transformation. 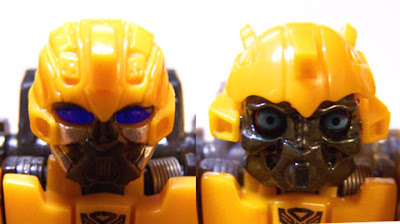 The new head sculpt is fantastic, and as I said, proved to be the selling point of the toy for me. It's a larger and more ambitious design, with the components on the sides of his helmet jutting out more prominently and much larger antennae that really help to convey the appearance of the character as he appears in the movies. Where the first version had a light pipe built into the head so that his eyes would glow when held up to a light source, the new toy does away with this idea in favor of eyes that are painted blue with black pupils, representing the camera lens-like optical sensors Bumblebee and the others have in the movies. It's a really nice look, though I had to look through several Bumblebees at the store before I found one that wasn't cross-eyed. (I have this trouble with C-3PO toys, too.) The first Bumblebee I bought had a loose head that kept popping off, but the replacement I got was fine, so obviously your mileage may vary.

Hasbro also tweaked Bumblebee's color scheme, swapping out his yellow-and-black colors for yellow with metallic grey. We lose some of the resemblance to the original incarnation of the character (as well as some of the metaphor behind his name), but it's more accurate to his on-screen appearance in the films, so I'm okay with it. It seems like the paint on his doors is a less precise match to the surrounding plastic this time, but that's a comparatively minor thing. A handful of other changes were made, like adding some pin striping around the borders of his racing stripes and a more authentic-looking GM logo that do improve the appearance of the toy.

Overall, though, the changes Hasbro made to the toy hurt it more than they help it. It's one thing when you take an action figure and package it with a different lightsaber or something, but when we're talking about a transformable toy that's engineered so that all the panels shift and fold and fit together precisely, just about any alterations you make are liable to mess things up along the way. I can appreciate that Hasbro was trying to offer something new and different so kids didn't feel like they were buying the exact same toy over again, but as far as the new gimmick goes, they really should have just left well enough alone.

I have to admit: It was the head sculpt that really sold me on the toy. The face is just utterly beautiful and so accurate compared to the '07 deluxes. Needless to say, ROTF BB was a must buy for me. (But then again, I have to have everything Bumblebee...)

That said, I'll try and keep the tabs in mind when I transform him. Maybe I'll just get Prime to shave them down a bit.

No way. New head with eyes that I didn't like, cannon/stub instead of a hand, a transformation that's screwed up with "improvements". I was pretty disappointed.

Moreover, something about the arms changed too, because when I glued the yellow shoulder pieces into place as I did with the original, it glued the balljoints too...

My ROTF Bumblebee resides in my trashcan right now...

Honestly. I hate his eyes. The new head sculpt is cool, but the eyes... That could've been different in my opinion. Now he has bug eyes and this constant confused look on his face. :|

Yeah, what's not broken shouldn't be fixed. They totally destroyed a perfect toy.

i've got the original one and it's just awesome