Zob's Thoughts on the Revenge of the Fallen Novelization 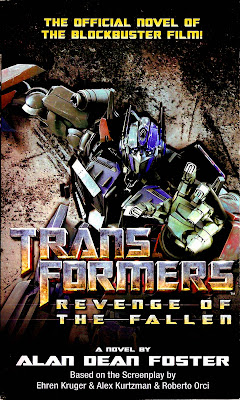 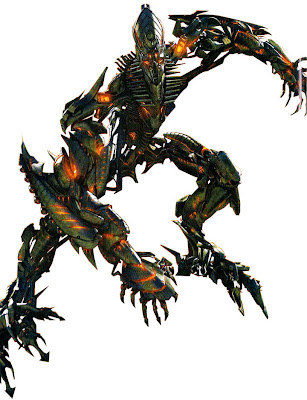 Also, here's a gag that not everyone is going to get. The government is trying to pass off the Transformer sightings as human-built, remote-controlled anti-terrorist machines that have malfunctioned, and the name of the company claiming responsibility for them is Massive Dynamics. This just happens to also be the name of the secretive technology organization from the FOX television series Fringe, which was also created and written by Alex Kurtzman and Roberto Orci. (The fictional company even has its own web site, massivedynamics.com, though at the time of this writing it does not include any Transformers-specific content.)

If it turns out that Massive Dynamics has a representative named Donny Finkleberg, the cycle can be complete!

The Fallen remind me of Cobra-La from GI Joe; someone from out of the blue that just happens to be the true leader.

Is this movie safe for kids to watch or are there bits that are inappropriate for kids?

Isn't the company in Fringe called
"Massive Dynamic" (without an "S")?

Anonymous: If the last movie is any indication, it's very possible they will change some scenes from the way they're depicted in the novel. (The scene from the 2007 movie that bothered me the most wasn't in the novelization at all.) It also depends on what you consider objectionable. I would recommend screening the movie first before taking any young children to see it, just in case.

I stopped halfway or so to post this comment--please tell me that it's the novelization itself that uses the incorrect spelling Skorponok, and not a momentary lapse in your own judgment, Zob.

Otherwise I have to break this out:
http://img.photobucket.com/albums/v304/onslaught86/Art/Scorponok.jpg

Regarding spelling errors: The novelization does call the company "Massive Dynamics" with an "s," but Jeff is quite correct that the organization from Fringe (as well as the web site) are in the singular, not plural. Thanks for the correction!

As for Skorponok's name, the novel for the 2007 movie spelled it with a "k," as does the current novelization. That's how I've taken to spelling the name of the movie character, specifically, but I know Hasbro spells it differently. (Cute drawing, by the way.)