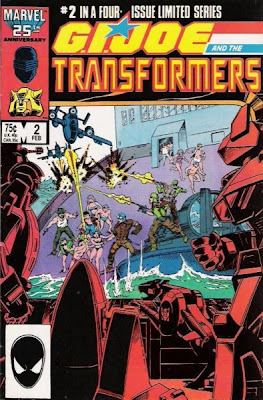 Power Struggle (again, no exclamation point) is the second in the four issue G.I. Joe and the Transformers limited series. Continuity-wise, it takes place (more or less) between the Transformers ongoing #24 and #25, though there are a few hiccups along the way. Mercifully, the creative staff is unchanged from the last issue. Michael Higgins continues to script the series, with Herb Trimpe pencils, Vince Colletta inks,Nel Yomtov colors and Joe Rosen letters. I believe that Herb Trimpe also drew the cover, though I'm not 100% sure on that point.

The cover is a bit off. The Joe team defends some civilians on a boat from an aerial strike by Cobra Rattlers. Meanwhile, several Decepticons, seen in black and red, observe the proceedings on some kind of monitor. It's a bit clever, I'll grant, but it winds up making the action a little too small to be effective.

A lack of action is the central problem of the book, too. Picking up where issue #1 left off, Superion confronts the Joe team for destroying his teammate, Bumblebee. Sort of. Mostly he just stands there while the Joes throw more and more ordinance at him. Just at the point when he's starting to seriously consider retaliating, he gets a message from Blaster - Optimus Prime is dead! All autobots have been ordered back to base, and so he breaks off the engagement. Oddly, he leaves Bumblebee's remains behind - I can't imagine scooping them up would have taken more than a few seconds. Of course, there's a plot reason for that,

Meanwhile, at the Decepticon's new Floridian headquarters, Megatron watches the theft of Power Station Alpha but does not really see it. The Decepticon tyrant is barely aware of Bombshell's cerebro-shell based triumph. Shockwave concludes that Megatron must be removed from power. Oh, and Ravage is here, despite the whole mineshaft incident back in #20. Now, that doesn't really seem like a continuity flub, since, really, a mineshaft? But Ravage would stay out of the main Transformers book until #72. Also, Megatron's lethargy doesn't really play here - one would think that the Decepticon leader would be filled with triumph after defeating Optimus Prime. The next issue (of the ongoing) will delve further into Megatron's mental state, but for right now it feels odd.

The Joes and Cobras both observe the remote launch of Alpha with consternation. The Joes scramble to track it, the Cobras decide to take advantage. Doctor Mindbender manages to hijack Bombshell's frequency and brings the station towards the Cobra base. The Joes engage the Cobra forces in the air, though Serpentor (now apparently the Cobra leader) takes advantage of a cruise ship to force the Joes to back off. This is not entirely a bad development, though, since the cruise ship belongs to none other than ... G.B. Blackrock, who overhears talk of giant robots. This development is way too coincidental to accept. One would think that a team as elite as G.I. Joe would have access to the government's full suite of intelligence on Transformers and thus not need such clumsy plot devices to learn about the Autobot/Decepticon war.

Meanwhile, the poor boy Bombshell used as a diversion still suffers from having Decepticon tech in his head - he's near catatonic, though an x-ray reveals the culprit. Hawk gets it on with Senator Larkin, who asks him to "protect what's hers." I mention these things not because they are critical to the plot, but because they wind up being the most interesting aspects this issue has to offer. The Larkin/Hawk romance will have more payoff later, but the idea that some unwitting (literally) pawn in the Decepticons schemes would wind up nearly mindless and require brain surgery is a terrific plot angle. I wish that the comic had explored more themes along these lines.

As Alpha lands at the Cobra base, so too does another aircraft - Dirge! He and Bombshell compliment Cobra on seizing the station and propose an alliance. Mindbender accepts, but not without planting a bug on Dirge. And thus, he overhears Shockwave's plan to use Alpha to ... DESTROY THE EARTH!!!

Overall, a fairly weak effort. It suffers from, among other things, taking place TOO firmly in the Transformers / G.I. Joe continuity. Things like the Death of Prime and the deposing of Cobra Commander take place off-screen and with hardly a blink. Also, the action is just not there. The Robot violence consists entirely of Superion taking lots and lots (and LOTS) of fire from the Joes and then withdrawing. The Joe / Cobra battle wasn't bad, though Blackrock's presence made the whole thing hard to believe. Even the fun idea of a Joe/Autobot team fighting Decepticons/Cobra never really fully comes to pass. In this issue, a Cobra/Decepticon alliance is proposed, but only a few pages later Cobra learns that the Decepticons intend to destroy the Earth. The Joe / Autobot alliance hasn't even really started yet.

Power Struggle is fairly difficult to obtain, having not been reprinted since 1993. Still, given the overall weakness of the story and the lack of anything critical happening to the ongoing Transformers story (with one important exception, but we'll get to that later), that's not the end of the world.
Posted by Jimtron at 9:13 AM

This is not entirely a bad development, though, since the cruise ship belongs to none other than ... G.B. Blackrock, who overhears talk of giant robots. This development is way too coincidental to accept. One would think that a team as elite as G.I. Joe would have access to the government's full suite of intelligence on Transformers and thus not need such clumsy plot devices to learn about the Autobot/Decepticon war.

Leaving aside whether the introduction of Blackrock was handled well or not (and I'm not unbiased on the matter), it bears emphasis that the government position has consistently been that there's no difference between the Autobots and Decepticons, and that both are equally threatening. I wouldn't trust the Joes to be able to discern the difference between the two factions on the basis of intelligence gathering alone.

True enough. I'd trust the relatively open-minded Joes, though, to look at the evidence and make up their own mind. And while the government's position was that there was no difference, the idea of multiple factions had been brought up often enough that the idea would be at least alluded to. That, combined with their experience with Superion, probably would have been enough.

I think it's the continuity errors that really bug me about this mini-series more than anything else. Ravage's inexplicable reappearance is just one of them, though. Red Alert makes his first comic book appearance in this crossover, despite not having appeared in TRANSFORMERS yet. Dirge gets killed by Cobra, but he shows up later and he's just fine. I think a corroboration between Larry Hama and Bob Budiansky would have been so much better than a third-party writer who didn't have any experience with the characters or settings.

I think a corroboration between Larry Hama and Bob Budiansky would have been so much better than a third-party writer who didn't have any experience with the characters or settings.

Agreed! Though, my understanding was that neither writer was very interested in doing this book. I think that, in contrast, Megatron's appearance years later in the G.I. Joe ongoing #138-142 was quite strong.

The continuity gaffe that bugged me most in this series happens next issue, with Ratchet in attendance at Optimus Prime's funeral.