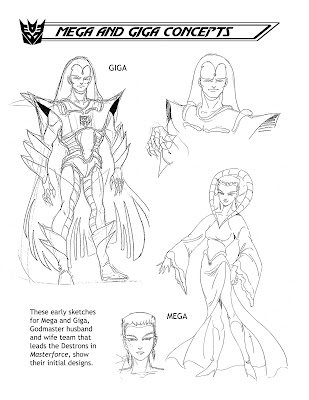 It's time for another edition of The Ark Addendum. This week, I'm shelving what I had planned in favor of some sketches of Mega and Giga, the husband and wife team of Godmasters that comprise Overlord. Yes, Iván is just that good.

These early concept sketches show what these two might have looked like. You can see some elements in their final designs, though I think the long tresses we got work better for Giga than the flowing locks depicted here. Mega, though, seems a tad more understated here. The witch's hat is anything but subtle.

By the way, stay tuned to friend-of-the-blog Hydra's own excellent little corner of the interweb, TF Pulp, for some more upcoming images of Masterfoce concept sketches including some unused characters.
Posted by Jimtron at 10:06 AM

Hot dang! I really like that Mega design, actually... man, I'm definitely going to have to keep my eye on TFPulp if there's awesomeness like this in the works.

awesome. I had never seen those. It's a real pity that none of these pages are making it into the omnibus :(

You really should release a (free?) CBR file containing all these extra pages, Jim ;)

Well, I certainly couldn't charge for it ... I don't really own the I.P., Hasbro does.