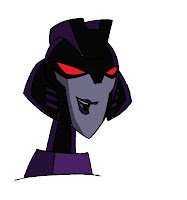 I'm LOVING BotCon this year. I mean, I love BotCon every year, but this year there are a number of factors that are making it kick even MORE ass than usual. The fact that it's a 20 minute drive from my house is great; the sheer volume of guests, phenomenal; the fact that I picked up two packets of rare character models, superb.

But in a way, all that pales in comparison to a throw-away line from Eric Siebenaler, the Hasbro designer behind most of the Animated toyline. Friend of the blog Colin asked about whether there will be a toy for the female seeker. While there are unfortunately no plans to make her, Eric confirmed the name we proposed for her as a part of putting together The AllSpark Almanac: Slipstream. Obviously, making Transformers books is pretty neat, but to get the chance to name a character is priceless.

Of course, it's not like it was our decision. It all started when Bill and I were brainstorming with Derrick Wyatt about the almanac. I mentioned that we needed a name for her, since everyone else had names (I know that there hasn't been an official toy with the name Ramjet on it, but that'll be in the book too). Derrick mentioned, offhandedly, that since she was played by Tara Strong, it was remotely possible that they could get a name into the show, but that they hadn't thought of any since her deco was brand new. We suggested Slipstream, which he liked. Derrick shouted it over the wall to Marty Isenberg, who also thought it worked well, so we put it into the book.

Even then, though, it wasn't official. Since we're (Cartoon Network and IDW both) licensees of Hasbro, they rightly get the final say. I was pretty sure that there wouldn't be any problems, especially once we got back the notes on the first draft and nothing was said about it. Still, I didn't want to jump the gun until we got the 100% final sign-off on the final version of the book. So, when Eric announced the name today, I was very pleasantly surprised. I guess it's official. Of course, I've teased about it a bit in the past, but I made sure not to be too specific just in case.

I hope you guys like the name! I know it's not Susan, but I thought that it had the same sort of feeling as the other seekers. A pair of words, connotations of flight, vaguely feminine. Let me know what you think.

6/1/09 update: I would be remiss if I didn't point out that it was Bill Forster, my esteemed co-author, who was pushing hard to name the character. He's about as big a seekers fan as I've ever met, and relished the chance to contribute to the mythos in this way.
Posted by Jimtron at 3:51 PM

Email ThisBlogThis!Share to TwitterShare to FacebookShare to Pinterest
Labels: Slipstream

I like it, too, it's perfect. A toy would have looked great alongside Black Arachnia and Arcee. Maybe we'll see Elita 1 one day?

I like the name. Along time ago, I thought a cool name for her could have been Moonracer. Although it's an autobot name, the seekers would have had the whole moon and star thing going on for them.

The name parallels nicely against that of her 'brother' Starscream.

what part of starscream is slipstream?

Phil: I'd love an Elita-1 toy, but then I'd love just about any unproduced Animated toy. Omega Supreme with a Lugnut Supreme repaint would top my list.

Shawn: agreed, Moonracer fits the nomenclature too and could work well for her. Of course, the Autobot connotations ARE pretty strong.

Anonymous: I though so, it has general cadence.

Good name. I mentioned it to people on the TFW boards a while back the name at least starts with 'Sl...' and nobody would believe me :( *sob sob*

Looking forward to the Almanac!

Nah her real name IS Susan....its just that she'd kill anyone who calls her that...so its Slipstream or death

Can't wait to buy this damn book already! It will be the best art book I get all year - including the Movieverse Art of book coming out.

Now what about Ms Orange and Ms Zora here?: http://tfwiki.net/wiki/Image:Animated_females.jpg :)

I always thought the name Susan was ironic, since that was also what the creators called the female Avatar until she got an official name. Of course, I have no idea if that was intentional or not, but still...

I was really disappointed about the level of derision in their voice when I asked about Slipstream (nee Susan). And yet she is the best of the jets for me.

Glad to meet you at the Con. We should talk Toyfare catalogs sometime. :)

And there is already a TM on Slipstream from a Gi Joe figure at Hasbro, so no problems getting the name.

There's already a G1 Autobot with that name.