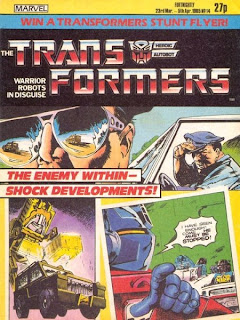 John Ridgway moves aside this week for Mike Collins to provide the art. The colouring is still by Gina Hart and Simon Furman continues the story he began.

The cover is by Collins and its another budget one, taking two panels of interior art and one new one of Prime talking to his troops and combining them in an admittedly effective montage. I much prefer original images (although at least you get to see some of the black and white interior panels in colour, this way) and, by choice, I like single, striking pictures for covers, but the pictures are well chosen, arranged effectively, and the text promises us “Shock Developments!”

Ravage, having survived Starscream’s savage attack, is badly damaged, but determined to get his revenge. Just when he thinks he can no longer continue, he is saved by Megatron, who cannot conceal his rage when he hears that it was Starscream, rather than the Autobots, who left Ravage in this state. Starscream continues his own attack on the United States Air Force, in the hopes of luring the Autobots out. However, they have their own problems: Brawn has gone awol and, in his confused state, is trying to liberate Earth’s machines from their organic enslavers, not realising that Earth technology is not sentient. He becomes agitated when he cannot get through to the cars and ends up in a confrontation with a traffic cop. Eventually the Decepticons catch up with Starscream, the Autobots catch up with Brawn, and the stage is set for two confrontations, mirroring each other, within the two sides.

The story is serviceable, although forced in places. No explanation is given for how Megatron finds Ravage, nor how, at the end, the Decepticons force Starscream out of the air and into robot mode. There is an odd disconnect between his duel with the air force and then his being outgunned by Megatron, as though there were a page missing. Furman uses the technique here (and in several other places) of having the dialogue from before a scene change be echoed or finished in the first panel of the next scene - the human pilot’s “NOOO!” at Starscream’s attack leads directly into Megatron’s “Yes Starscream, us! - your ex-team-mates - The Decepticons!” It can be a fun stylistic choice and it is one that Furman occasionally uses to this day, but it can come across as a little too cute, which I feel it does here.

Thematically, the idea of two concurrent insurrections occurring simultaneously within the ranks of the warring sides is a potentially interesting one, but I feel that although a lot of effort is expended on mirroring the two situations - especially on the last page - it doesn’t quite ring true. Brawn’s rebellion being caused by an accident rather undercuts the similarities being developed. What Furman needed for this story to work was the freedom to brand one of the Autobots a traitor, like Starscream, but it is understandable that he would not have been able to do this on such an early issue, and only his second. After all, the object of the exercise was to sell toys with personalities that had already been worked out, not to mention that everything had to be kept in line with the US issues.

The actual script however, cute cutaways aside, has no problems. Furman has instantly made these characters his own, whether because he straightaway saw their potential, or whether his somewhat self-aware, overblown (almost Stan Lee-esque) dialogue style was just a perfect fit for the story of The Transformers - every Transformers fan should be glad that they were paired up. Nobody writes a Starscream rant like Furman, and although his Autobots, in this story at least, come across as comparatively boring, they still manage to get across the idea of their own unique personalities, rather than simply as generic soldiers. The humans are perhaps less believable than the robots. I find it unlikely, for example, that a man, while swerving to avoid an accident, would remind himself that he “Gotta swerve!” out loud, but comics of the time are full of examples like that.

With regards to the humans, Furman is certainly not afraid of racking up a death toll, even in this children’s comic. You don’t actually see anyone die, but cars and planes explode with people in them, and there are no A-Team style miraculous escapes. Some of these deaths are caused by the rampaging Brawn, which would have been a nice theme to develop in later stories focussing on him, but it seems unlikely that such themes would have been allowed to be explored.

The art is, again, very well done. I hesitate to rank them, but I think I prefer Collins’ work on this issue to Ridgway’s in the last, but just barely. Hart’s colours unite the two fairly well anyway, their styles are not dissimilar. The first panel, Ravage dragging himself across the desert while swearing revenge on Starscream, is an excellent portrayal and I am very impressed by the action scenes. Explosions and destruction are handled excellently, and Starscream’s destruction of an Earth F-14 gives us a nice in joke - an updated version of Roy Lichtenstein’s famous pop-art painting, “Whaam!”, complete with the same sound effect. Using the toys and box art as models still provides some awkward moments, but Sideswipe actually gets a face this issue, which was relieving. Brawn’s robot mode is still sadly ridiculous, but that was the model being used, and I don’t think Collins’ Megatron is as good as Ridgway’s - it relies even more on the toy and ends up with a really square head with an irritatingly small face. 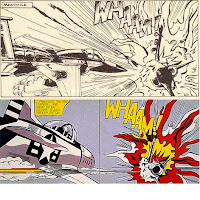 The colours, again, are great, such as they are. Budget requirements have left us, once again, without colours for the last two pages (and several more before that) which takes some of the impact out of both the Lichtenstein homage and the final page. This infuriating practice disappears in a few issues’ time and I won’t be at all sorry to see it go.

Not a bad issue - keeps things moving ahead, and this story is head and shoulders above the previous UK one. Nothing Earth-shattering, “The Enemy Within!” so far feels like a standard tale in the Transformers saga, not any kind of touchstone, but not a bad read.
Posted by Bishbot at 10:24 AM

The color / black and white shift is really jarring. It also probably plays a big part in why these stories haven't been reprinted.

Very late in the day on this one, but both Man of Iron and The Enemy Within had full colour reprints in the Collected Comics series and The Enemy Within was reprinted in colour again in the last year of the UK comic. (Raiders of the Last Ark, however, never got the same treatment.) It seems to be Simon Furman's editorial choice that has kept the early Marvel UK stories out of the trade paperbacks.