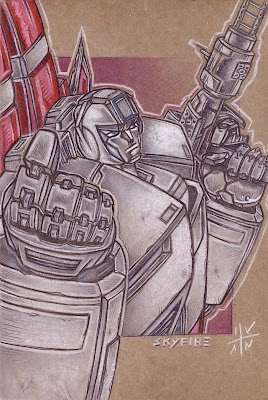 Not taking any time off, today Iván brings us - Skyfire! Here is what he has to say about it:

Curious ... my friend Jim selected to the first pin-up I made with this style..
Skyfire ... great character, inexplicably abandoned in the comics..
In my country this character was chosen as leader autobot, well, or at least appeared in the catalogs,
I think all the history that is associated with starscream, and the north pole, which appeared in the animation was one of the most liked stories in the epoch.
I think the character deserves a spotlight no doubt, is charismatic and attractive in design, and is one of the few transformers that have a good story.
I think it also .. the fact that it was an original design of Bandai Macross related exercises a strong attraction both in character and in the plaything, and is one of the best-designed.
I am delighted with the bust that will appear soon in diamond because it is one of the few that there are physical representations of skyfire faithful to the character of the 80s.
I wanted to convey this image of strength and feeling of authority.. I did it in a paper with colored pencils and a black felt pen in five hours.

Wow that's quite an old one. I still love it. Nice choice, Jim!

(uhm... did I hear Spotlight Jetfire, written by Jim Sorenson? Now that would be a great idea :P)