Hasbro's still playing fast-and-loose with the old character trademarks to which they've lost ownership, and there's really no way around it. Either they give the characters non-names (like the Heroes of Cybertron "Autobot Espionage Team" that cleverly sidestepped having to actually identify Bumblebee by name) or they slap another character's name on the package, or they invent completely new names altogether. I generally prefer the new name approach, if only because it prevents confusion and the watering down of existing trademarks. 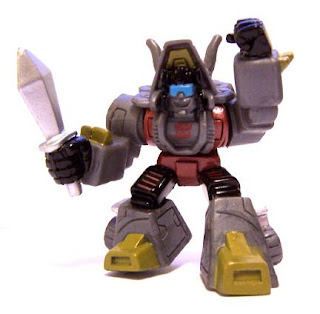 Robot Heroes "Snarl" is just the sort of thing I'm talking about. This is actually Slag, of course, but Hasbro's rights to that name have elapsed, so they did the next best thing and gave him the name of one of the other Dinobots. (At least they didn't call him Triceradon.) So, what happens when the real Snarl gets his turn at chibification? What does he get to be called? I don't like the direction in which this is going. All it took was a handful of red-colored Bumblebee toys for Cliffjumper to completely lose his individual identity. The same thing could easily happen to Slag and Snarl. (Wait, which one is the stegosaurus again? Eh, who cares? Their names are interchangeable!)

Trademark complaints aside, this really is a cute little figure, and it really embodies Slag. Specifically, it's a cute and cuddly version of a really angry Dinobot, and this juxtaposition of concepts is one of the reasons I love buying these things so much. He's articulated at the shoulders and head, and something really interesting is that his entire dinosaur head rotates along with his robot head, including the triceratops horns and head crest. Unfortunately, somebody came up with a completely new color map for him without bothering to consult the previous Grimlock figure for consistency's sake. The Dinobots were all created at the same time out of the same materials, so it just doesn't make sense for them to be different colors from each other. While Robot Heroes Grimlock is a bright silver color, Slag is a murky grey. Slag's red color is also more subdued, and his gold highlights are muddy and greenish compared to those on Grimlock.

There are other design considerations too, like the fact that Grimlock has red eyes (like the toy) but Slag has blue (like the G1 cartoon); Grimlock carries a red sword (toy) but Slag's is silver (cartoon). It really should be either one or the other. Also, I've always found Slag's red face and red helmet from the cartoon to be quite striking, so I find it unfortunate that this most distinctive look wasn't carried over in this case, given that they took their cue from other cartoon details. (The Diaclone version of the toy had a vac-metal sword and horns--which was the version on which Slag's cartoon model was based--but Hasbro replaced those parts with red plastic that was more flexible and less likely to snap in two.) 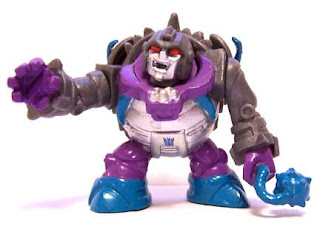 
The name "Sharkticon" is a sub-group, not the identity of any character from G1, but in this case I don't find it the least bit offensive since the Sharkticons were mindless animals, not individuals. The appelation "Gnaw" was a Hasbro invention that allowed them to produce a Sharkticon toy and market it as a Decepticon character, even though the Sharkticons from the movie were never affiliated with the Decepticons and never once worked for them. (This toy does have a tiny little Decepticon emblem on his belly. Now, where did I put my paint thinner...?) I do pay attention to the pairings of Robot Heroes characters with one another and try to find some kind of logical reason why the two would be matched up with one another. Slag did encounter the Sharkticons during a brief incursion from The Transformers: the Movie, so at least packaging them together makes some kind of sense.

I love Robot Heroes Sharkticon. He is, by far, one of the very best figures in the line to date. I'm not even a big fan of the Sharkticons, honestly. The original Gnaw figure was a big, chunky, preschool toy, and I really can't get behind big, dumb monsters with no brains. I mean, there are cool armybuilders like Star Wars stormtroopers and TMNT Foot Soldiers. Those are meant to be purchased by the caseload. Then there are lame armybuilders like buying a bunch of G1 Scourge toys and pretending that they're Sweeps. It just doesn't work on the same level. Gnaw fits firmly in the latter category. Despite this, I'm really impressed by this sculpt. It really captures the massive rotundity that characterizes these guys. Its design actually follows the animation model, too--the way the shark's head splits in half a little to accomodate his dorsal fin--instead of being just a miniaturization of the Hasbro toy from 1986. And, of course, he's carrying his own tail as a weapon. (Thank you, Kup, for teaching them that particular trick.)

I think the existence of Robot Heroes Sharkticon does open the door for the possibility of a Robot Heroes Quintesson at some point down the road. I mean, think about it. The twenty-fifth anniversary of Transformers is right around the corner, and the Quintessons are the most prominent villains in the mythos who never got official toys. They also created the Sharkticons in the first place, so it makes perfect sense to get another figure to complement this one. I've said this before, and I'll keep on saying it: A cute, tiny, super-deformed Quintesson Judge would be the coolest thing that a little toy factory in Rhode Island could possibly produce. I'm dead serious.

Great review, as always. One comment - I believe that Hasbro actually HAS the trademark to 'Slag', but doesn't use it because it's offensive in the UK. (Roughly akin to 'slut') That doesn't change your point that, when the ACTUAL Snarl's turn comes, they're going to be short a name. Let's hope they stay away from 'Slapper', at least.

Is it just me, or does the Sharkticon have six fingers on his right hand?

(My name is Inigo Montoya! You killed my father! Prepare to die!)

I'm still hoping for the other two Dinobots to show up in Animated...

You're right, B-W, it does kind of look like he's got an extra thumb in there somewhere. That's actually the palm of his hand, but I guess it's just sculpted a little oddly.

How is Gnaw not an army builder?