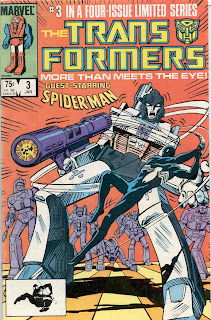 Prisoner of War! is the third issue in the four part mini series that launched The Transformers comic book saga. Jim Salicrup now has sole writing credit, with Frank Springer once again providing the pencils. Inks by DeMulder & Esposito, color by Nel Yomtov, Letters by Janice Chiang (and others), edited by Bob Budiansky. Michael Golden provided the cover.

The cover is simple but effective. Spider-Man swings around Megatron, wrapping him in webbing while the Decepticons look on. Megatron trembles with effort, getting ready to burst through his bonds. The background Decepticons are block colored, which keeps the attention on Megatron and Spider-Man. Gears' character model is in the upper left, appropriatly given that much of the story focuses on him, and Spider-Man swings in the lower left. Guest Starring Spider-Man, it redundantly proclaims. Overall a dynamic, focused cover. Spider-Man's shadow on Megatron's right leg is particuarly well done.

Though the tone is wobbly, the plot basically solid. I say this despite my inherent skepticism of crossovers. Picking up from where #2 left off, we are immediately reminded that Sparkplug is a PRISONER OF WAR! He spends over a page just showing the Decepticons returning to base, an odd choice from a pacing perspective but serving as a decent reintroduction of the core concept of the book. Then we're treated to some Megatron / Starscream / Sparkplug banter. Cut to the Autobots, who spend a whole four pages just getting back to the Ark. Once again, a surprisingly slow pace coming off of the tension from the last issue. After Laserbeak's interrogation (points for using him for his intended function), Sparkplug reluctantly agrees to help the 'Cons. Their subsequent acquisition of materials for him attracts the US and Soviet governments, S.H.I.E.L.D., and the media. The media, including the Daily Bugle. Hence, Spider-Man. By page 11, they've managed to shoe-horn him in. He and Gears meet and bond after a bit of good-natured (and well-written) banter. The dynamic duo pair of them manage to defeat Frenzy, Ravage, Soundwave and even hold their own with Megatron for long enough to web him up and rescue Sparkplug. Megatron breaks free and blasts a hole in the floor, sending them careening off the mountain. Spider-Man is (naturally) fine, and manages to save Sparkplug, but Gears prooves too heavy for the webbing and crashes down below. The Autobots withdraw, and Spider-Man chides them for their callousness about Gears' death. Not so, he's informed, before exiting stage right. Ratchet manages to get Gears on-line, who informs them that Sparkplug gave the Cons what they wanted. "Say it ain't so, Dad", ends the issue. Overall, the pacing seems a bit relaxed in places compared to the last issue, and while the Spider-Man / Gears pairing is undeniably fun, it seems a bit . . . super-hero comic bookish. The science-fiction elements take a backseat to more traditional comic book tropes, and it doesn't quite work.

The script works well. Points to Salicrup for working the phrase 'more than meets the eye' into the first panel. While Starscream's interaction with Sparkplug is a little too computer-y for my taste, the banter between Starscream, Megatron and Sparkplug is perfect. Sparkplug is defiant, Starscream is ingratiating, and Megatron is domineering. Sparkplug's observation that they've turned a nuclear power plant into a non-energy generaring fortress was a nice one, and gave interesting insight into Decpeticon psychology and technological limitations. Gears is written as cantancerous and makes a good foil to the light-hearted Spider-Man. Overall, Salicrup has largely found his voice by now. He's still awkward with incidental humans, such as a trooper who tries to give the Autobot convoy speeding tickets, or the embarassing ease with which Spider-Man tricks the US Military. We get a bit more foreshadowing, as Ratchet starts to inform Prime of some new information recoverd from the Ark's memory banks. Coupled with the 'one of our mightiest is missing' line from the first issue and we're well set up for next issue's surprise ending. Items of note include Rumble calling Sparkplug a scraplet, which we'd later learn is a robotic parasite, and Frenzy calling Rumble 'brother'.

Frank Springer's art takes a huge shift as he now apparently has nearly all of the character models. He still seems more comfortable with humans than robots. Spider-Man is fluid and dyamic, whereas his robots still have an awkwardness about them. He has a hard time wringing emotions out of them, despite several close-ups on Optimus, Megatron and Gears. His battle scenes remain exciting, especially an interlude where the Decepticons fight off the US military. As usual, several of the Autobots are rather dramatically mis-colored. Observe a mostly white Cliffjumper, a blue Sunstreaker, and a white Windcharger.

Overall, while Spider-Man and Gears is fun, it undercuts the more serious tone that had been developing for the last two issues. Also, Gears (with a super human) defeating half the Decepticon army makes them seem far less threatening than they had been. This issue reads well enough on its own, but doesn't fit in with the rest of the miniseries.

Because of the Spider-man crossover, this was not printed by IDW. It is available from UK based Titan Books, though: Transformers: Beginning
Posted by Jimtron at 10:36 AM

You mentioned that Gears is on the cover and is located in the top Right...don't you mean top Left