I'm just not a fan of the Transformers: Animated cartoon show. I don't think any less of people for enjoying it, of course, but personally I don't find it entertaining. I do buy the Animated toys from time to time, specifically the ones that strike me as successful reimaginings of older G1 characters. I've always loved G1 homage toys, and to me, the Animated toy line is appealing because of the tributes to popular Transformers characters from the past. (I don't particularly care for the idea that every new Transformers series takes place in some alternate reality, and has absolutely nothing to do with the original series that actually made me a fan. I think it's more fun to pretend that these are updates of the original characters--which, from a Hasbro design standpoint, is exactly what they are.)

Swindle (x2) is currently shipping in a case assortment with Blurr (x2), a repack of Bumblebee in his original colors (x2), and the Blazing Lockdown redeco (x2).

The original Swindle from 1986 was a largely forgettable and uninspired toy, whose design had to conform to the same constraints as the other toys designed for Scramble City (he had to be able to assume an arm configuration with a peg hole for a fist; he had to also be able to turn into a leg configuration that was the same height as every other toy in this mode; and he had to have a square-shaped connector peg, which like most of the other toys of this era turned out to be his robot head). What made Swindle interesting to me, though, was his cartoon portrayal. He was a diabolical schemer who had no problem scamming even other Decepticons, and yet he had an affable charisma that somehow made him likable. Unfortunately, some significant liberties were taken with his cartoon design, and he was drawn in such a manner suggesting that his chest and pelvis somehow turned into the windshield and front grill of his Jeep mode, something the oversimplified Hasbro toy couldn't do. I've wanted to own a Swindle toy resembling his cartoon appearance for some time, and even designed a reproduction label for Delta Star that's available at reprolabels.com. I figured this was as close as I was ever going to get. 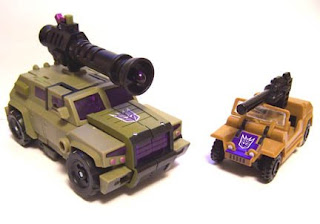 The newest version of Swindle does take its cues from the G1 animation model, but puts a decidedly Animated-style spin on things. He turns into a compact Hummer-shaped vehicle (the packaging calls it a "transport mode") with purple windows and topped off with a nice, big launching cannon. One interesting design feature of the cannon that I haven't seen before is that when you load the missile, it pushes an internal chamber back, which is partly visible through the holes in the outer barrel of the cannon. There are painted stripes on the inner chamber that are only visible when the missile is loaded, so the end result is that the slots on the outer barrel change from purple to a bright, translucent orange when the missile is inserted, indicating that Swindle's weapon is armed and ready to fire. It's a simple but clever gimmick. Interestingly, the trigger for his launcher is not the gigantic purple-colored tab as one might expect, but the much smaller green one in front of it. I struggled with the launcher for a while until I realized the big, purple tab is just for show! (The weapon is described on his packaging as a "gyro missile," a tribute to the gyro gun the original Swindle was equipped with.) On the packaging, he's also equipped with an undercarriage rotary Gatling gun that looks a little bit like G1 Soundwave's shoulder cannon, but the weapon isn't designed for this mode, and his front wheels can't touch the ground when it's deployed. The toy also has an undocumented, unofficial "hover mode" due to the way his back wheels can fold down to form VTOL fans of sorts.

His transformation to robot mode is sort of a cross between movie Bonecrusher and G1 Skids, with lots of swiveling shoulder panels to get his arms into the proper robot configuration. (In a fit of cuteness, the front grill for his vehicle mode unfolds into his hands, almost like a weird homage to the original Onslaught toy.) Even the components that end up on his back, as well as his claw-like hands, give off a strangely Bonecrusher-like vibe. His head sculpt is unmistakably Swindle, though, with his black squared-off helmet, dark face, and big, purple eyes. If the head sculpt is the most important part of a proper G1 tribute, then Swindle passes the test with flying colors. His cannon is detachable and connects to his forearm in robot mode. (This in itself is another homage to the original Swindle, who was depicted with an arm-mounted cannon in the cartoon.) 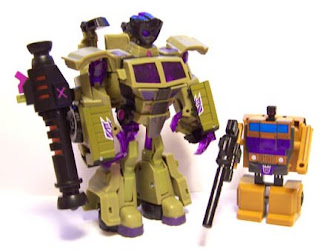 As a robot, Swindle has around 22 useful points of articulation, including working thumbs (making him one of the blessed few Transformers toys who can actually grasp things) and hips that both pivot and swivel (although the shape of his pelvis does limit his leg movement a bit). The circular panels on his hips also pivot outward to allow for more leg movement on that axis (they look like they're supposed to represent wheels that have shrunk down a bit for his robot mode). The Gatling gun is also capable of swinging forward from a panel inside his chest, allowing him to use this weapon in robot mode. This is truly an impressive update for Swindle, and for the first time, he actually has a windshield for a chest, arguably an important design element to the character. He was design with a lightpipe effect so that his eyes glow when you hold him up to the light; his upper arms, upper legs, claws, and gyro missile are also made from this translucent purple color. 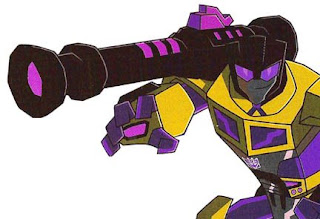 If it had been my job to design this toy, I would have done a few things differently. First of all, his windshield is actually segmented in the middle, making him resemble Optimus Prime (or Onslaught) more than the original Swindle. The presence of what looks like faux headlights and a grill on Swindle's abdomen further cements the Optimus Prime resemblance. (The original Swindle, as depicted in animation, had his headlights and front grill on his pelvis.) Also, the package artwork and photographs don't seem to agree with the actual color scheme on the toy. The original Swindle was a muddy yellow color, and the Animated packaging art seems to take its cue from that color scheme. The pictures of the toy on the back of the card likewise reflects this color scheme, but the actual toy I bought is more of an army green color. It's a disappointing discrepancy, since the proper muted yellow color would have gone a long way towards making this, arguably a very good toy, look even better. Finally, the packaging shows a tampographed Decepticon insignia on his chest (behind the component that swings around to reveal his Gatling gun), but the final toy does not have this paint application.

Overall, I enjoy this toy and I'm glad I bought it, but I really wish he'd been given the color scheme on the packaging. Hasbro said they were going to give us at least one running change to fix production problems on another toy (swapping out the blue-faced Transformers Universe version of Ironhide for a more accurate silver-faced edition), so maybe there's hope for a corrected version of Swindle some day?

Swindle and Deadend are my two favorite Scramble City type combiners. (Flint Dille's too, apparently.) It's great to see Swindle get so much love in Animated.

Not much to do with the review but Zob, it's about you got around to putting reviews in a regular blog somewhere that I can subscribe to.

I always loved your reviews on ATT but your websites tended to be a jumbled mess of broken links.

FWIW, I was Ramen Junkie when I still posted to ATT but that was a few years ago.