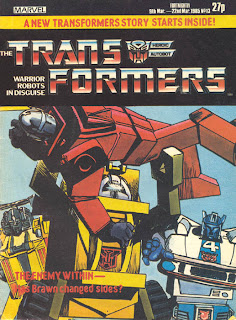 The art for part 1 is provided by John Ridgway. The colours are by Gina Hart and the editor is Sheila Cranna. The script and story are by Simon Furman, who Transformers fans ought to be pretty familiar with by now. This was, however, his very first story for the Robots in Disguise.

The cover is by John Ridgway and depicts a very toy-like Brawn holding Sideswipe above his head. Sideswipe has a strange, domed, head with one three-pronged hole representing his eyes and mouth. (this confused me, as all the research I have done suggests that even the first G1 Sideswipe toy has a proper face. If anyone can come up with an explanation, I’d be grateful). Sunstreaker and Jazz are frozen in shock and the text asks us “Has Brawn changed sides?” Not the most beautiful cover ever, the clunky models for Brawn and Sideswipe hurt it quite a lot, but it does the job fairly well.

In a nice contrast to “Man of Iron!” we immediately start the story with Megatron and the Decepticons. The first panel is a nice half-page close-up on Megatron’s face set in an angered shout. “How dare you!” he asks, with a red speech bubble. He is, as the caption puts it, “not amused”. Megatron and Starscream are arguing about the correct way to conduct their campaign on Earth. Well, Starscream is arguing, and Megatron is simply annoyed that anyone would attempt to debate with him. Megatron wants to study and learn about Earth while Starscream wants to go on the offensive. Megatron ends the debate with a warning shot from his fusion cannon that leaves Starscream so shaken that for one panel he turns into Skywarp. However, for once, Starscream is not alone in his concerns about Megatron’s leadership. It appears that other Decepticons might be willing to give him a chance, and Megatron is aware of this, as he informs Ravage, who asks, “was it wise to let Starscream off like that?”

Meanwhile, back at the Ark, Brawn is helping Mirage with some equipment. The test goes wrong and Brawn ends up taking a powerful electric shock. He seems ok, but resentful thoughts begin to bubble beneath the surface.Starscream comes up with a plan to force the Autobots into a confrontation by attacking the humans single-handedly. He figures that the other Decepticons would have to help, the Autobots would be defeated and his leadership abilities would be proven. Unfortunately he is so pleased with himself, that he relates his plan out loud, and Ravage happens to hear and Starscream comes after him. This leads to game of cat and mouse in the desert between Starscream and Ravage where Ravage is badly outmatched and is eventually trapped under a collapsing cliff face.

Elsewhere, Brawn, upon being asked to help with more work, appears to go mad, he attacks Sideswipe and breaks his way out of the Ark, heading for parts unknown. Mirage is concerned that he might pose a danger to the human population, and with the mood he is in, it doesn’t seem an idle worry.The issue ends with a page of humans at an air force base being attacked by Starscream, in plane mode, his plan now underway.Considering the low page count, a lot happens, and Furman’s style is distinctive even from the first issue. His Transformers are very chatty, prone to grandiose statements, and introspective thought processes. He nails the dynamic between Megatron and Starscream from their very first page together and I am fond of his sneaky spymaster version of Ravage - much more interesting than the animalistic cartoon version. The way in which Ravage learns of Starscream’s plan is, unfortunately, fairly bad storytelling. It is an obvious shortcut and doesn’t really ring true, although, I suppose, if any Decepticon would give himself away in self-obsessed speechifying, then Starscream would be the most likely. To me, the Autobot segments are less interesting, but it is clear that something is about to happen with Brawn, so the set-up works perfectly well, and I prefer Transformers stories where both sides get time to shine, which Furman provides here.

Ridgway’s pencils are very detailed and tell the story well. He is clearly still working off the toys and their box art, which can lead to some clunky appearances, but he anthropomorphises as much as possible. I am particularly pleased with his Megatron. His face, distorted with fury, on the first page is an excellent image, and my favourite of the issue (and Ridgway has, mercifully, altered the Megatron toy’s rather embarrassing trigger-placement - although not eliminated it entirely). Ravage has a moment lifted from his box art, a leaping pose that anyone who has seen his character model (or ninety per-cent of pictures of Ravage) will recognise, but I can’t blame the artist for cutting a corner, and it is a very good pose.

Hart’s colouring is, for the most part, good. The colours are vibrant and do not swamp or obscure the pencilled detail, as seems to happen more often with the US issues. There are a couple of instances where Starscream is miscoloured as Skywarp, and Megatron has some gold, reflecting a lot of the early Megatron artwork. Unfortunately, only six of the eleven pages are coloured, for reasons of budget and time and the chosen pages appear to be almost at random. Most irritating is the last page, depicting a full-page splash of Starscream attacking the humans. It should definitely have been in colour, if any page in the book was going to be. An air-force officer looks on in shock as Starscream bombs his planes into oblivion shouting: “Tremble humans! For today you DIE!” Its a great image, and a great cliff-hanger for the next issue, and to leave it in black and white was a crime.Issue 1 of “The Enemy Within!” doesn’t show everything Furman is capable of, by any means, but its already a big improvement over Man of Iron and the Transformers characters really seem to come alive when Furman puts dialogue in their mouths. The story looks like it is going to be fast and eventful.

(I haven’t reviewed Part 2 here for two reasons - 1) I haven’t yet had enough time, and 2) My review of Part 1 turned out to be pretty long. Part 2 will probably be posted on sunday.)
Posted by Bishbot at 4:58 AM

Regarding the cover art, it looks like that's Gears (colored entirely red) being lifted by Brawn. That certainly looks closer to the face and head on the Gears toy than anything on Sideswipe.

It is Gears, he gets drawn that way in a few early UK stories in the comic and the first annual.

It does look like its Gears, but based on the script inside, its a very bizarre version of Sideswipe. I don't know how it happened that he looks like this, but there it is.

"As Brawn's vicelike grip begins to crush his metallic head, Sideswipe's only thought is "What a stupid way to die.""

For the cover at least, the only requirement was to show Brawn fighting with the Autobots. A random robot is shown being held because the assumption is, in the story inside he will be tossing around several robots. The robot he's holding is almost identical to the original US character model of Gears (used in issue one of the comic) but it also bears similarities to the UK interpretation of Windcharger (except for the colours). inside however the image which is closest is the one where he lifts sideswipe. So while the cover is somewhat misleading, I don't think it's technically an error - just artistic license.