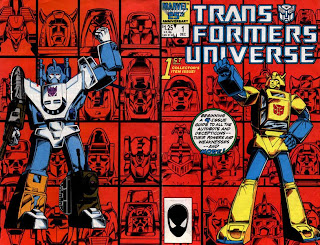 In 1986, flush with the success of the ongoing Transformers comic, Marvel began looking for ways to expand the good thing they had going. In August of that year, concurrent with their monthly title, they began the first of an eventual four mini-series, Transformers Universe.

It's easy to see why they chose the name (and, indeed, came up with the idea) if one examines the historical context. Marvel had had great success with their Official Handbook of the Marvel Universe line, a long-running limited series profiling many Marvel characters. From 1982 - 1984, they published what turned out to be a 15 issue limited series covering large swaths of their main continuity. In 1985, they began publishing a deluxe updated version that would turn out to be 20 oversized issues long. Since then, Marvel would revisit the concept many times and are still doing so today. 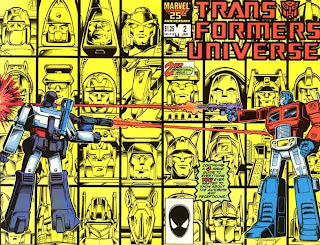 But Transformers made an especially good candidate for this style of book. Most of the work necessary to put this book together was already done, making it one of the cheapest and easiest books to assemble. The entries consisted of a combination of the character models provided by Hasbro and pre-written extended character biographies already written by Bob Budiansky. Color and ink the models, add in the character's first appearance, and they were good to go. 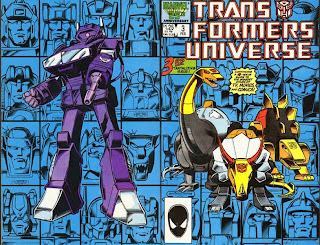 The covers were wrap-around and feature an Autobot on the front and a Decepticon on the back. For the most part, they don't interact with each other, though by alphabetic proximity Optimus Prime and Megatron get the chance to blast at each other. The characters are set against a monochrome backdrop of character heads, most of which are new art. A few of them, though, are the character model heads snuck in. The cover artwork isn't signed or credited, but it looks like Perlin's stuff to me which also tracks with the time period. Overall, the covers are fairly effective, with the gallery of portraits conveying a sense of the scope of the book, and mostly good choices for characters to adorn the fronts. I think that issue #1 should probably have gone with Devastator instead of Bruticus, and issue #4 should probably have gone with Rodimus Prime and Galvatron instead of Unicron (GAH! He's just SOOOO big!) and Arcee/Ultra Magnus. 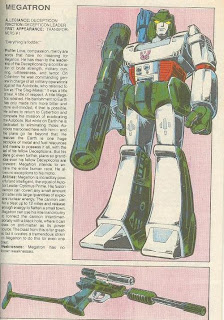 Once inside the book, we get a fairly uniform look and feel. The bios are consistently well written, featuring a lot of technical jargon. They jive very well with the tech specs from the toys, since the tech specs are in fact condensed versions of these extended bios. I do think it's a shame that we couldn't get the tech spec statistics in here. Doing them as a graph would have been difficult at the time, since it would have had to be done by hand, but even just the text would have been nice. Because of the way the book was put together, characters like the Deluxe Insecticons were omitted. Since they didn't have character designs, Marvel would have had to commission new artwork for them, something that they apparently were not interested in doing.

Of course, this being Marvel, they naturally used the Marvel versions of the character models and color schemes, which were not always identical to that used for the Sunbow cartoon. Megatron is a good example of a character who diverged; note his head and the trigger on his cannon. 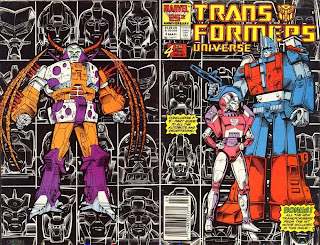 The fourth issue finished off the regular run of characters, then turned to the cast of The Transformers: The Movie. The designs here are some of Floro Dery's early concepts, not the final versions that would mostly be used in the movie or cartoon, and tend to vary more dramatically from the final versions than the earlier divergent Marvel designs. Additionally, the bios are more truncated.

Transformers Universe was fairly well received, at least judging by the letters pages, and in 1987 there was talk of doing a second volume. However, by 1988, it had become apparent that Transformers sales were declining and a fifth mini-series (after the first Universe, G.I. Joe and the Transformers, the movie adaptation and of course Headmasters) was not feasible. At this point, from issue #47 though virtually the end of the run, some issues would feature Universe style profiles for characters from 1987 and 1988.

Transformers Universe was a fun idea, executed well. I'm a big fan of profile books in general (not a surprise I suppose, since I write them), so I've always treasured these. I wish that the second mini-series had become a reality, though I'm happy that we at least got 75 pages or so of backup profiles. Transformers Universe hardcopies are not easily available (there's an out of print TPB of the most of the first mini-series, but it's notoriously hard to come by), but scans are readily available online.
Posted by Jimtron at 9:18 AM

I missed a lot of Marvel's Transformers, including the Universe series, something I've only heard of a few times. I really enjoyed Dreamwave's More than Meets the Eye series though, so I'm very interested in seeing these. Thanks for the information!

Interesting note on that Megatron character model vs. the animation model: it's lifted pretty much line-for-line from an uncoloured pre-TF Micro Change Gun Robo character design piece. Can't find a link to it right now, but still searching...

Megatron appeared that way for the first couple of issues, but quickly changed - along with several others - to match the animation model (in the US strips, at least; the UK artists drew strongly toy-based TFs for a little while, as noted in the Marvel UK readthroughs).

I remember the difficulty I had tracking these down, since at the time I got all of my comics either by subscription (which I knew of no way to take advantage of for a limited series such as this) or the local supermarket (remember when supermarkets had comics?). This series was (so far as I've ever been able to tell) only sold through comics specialty shops, and being too young to drive, and not having such a shop near home that I could talk my parents into driving to, I couldn't get these issues when they were new.

In truth, I probably managed to track them all down inside of a year, which my adult self sees as not too bad, but this was an eternity when I was only 11 or 12 years old.

I absolutely loved TRANSFORMERS UNIVERSE. It was an invaluable resource to me as both an artist and fan fiction writer, and I still keep them handy for use as reference. Even the copy of issue #1 that my dog ate.

When they first came out, I had no idea the profiles were the full length bios written by Budiansky and that the tech specs were the abridged versions. I had always assumed that they started with the tech specs and fleshed them out for the Marvel Comics profiles. A lot of the extended profiles have so much filler content!

I hate, hate, HATE the profiles for the movie characters. They're sloppy and feel like an afterthought that somebody threw together in five minutes. I'm firmly convinced they were put together by somebody else, possibly Ralph Macchio, who wasn't familiar with Budiansky's normal profile format. It goes Profile, Abilities, and Weaknesses. You'd think that wouldn't be too hard to muck up, but somehow they managed it. (I also think whoever wrote the movie character profiles was referring to some kind of preproduction notes about the concepts for each character. Why else would we get such a heavy emphasis on how massive Springer is or how Blurr looks longer and leaner than most Autobots? These are guidelines for the artist who's creating how the characters look. Why else would we get a reference to Cyclonus being a "multi-engine, and perhaps multi-wing" jet fighter? What, like we don't know how many wings the guy has by LOOKING AT HIM? Ugh.

Back when Tom DeFalco first announced the upcoming profile books, somebody had written into the letters page asking if all the characters would be included, like the Deluxe Insecticons, and the editors promised that every character would be there. Liars! (It's a shame they never showed up. Surely somebody could have cooked up some character designs. Maybe Marvel should have commissioned Floro Dery to do it? More people would have bought the toys if they had, I'm thinking.)

I'm very upset that Swerve was omitted from the book.

Note that Blaster appears in his regular cartoon model design here, rather than the toy-based helmet he actually has through most of the book.

Check out Octane's profile some time. He's so obviously based on Optimus Prime's robot design.

You know, it's ironic. Hasbro sells some Bandai designs in the US. They can't market them with the cartoon, though, because that also airs in Japan and Takara doesn't want to give free advertising to their competitors. Reasonable.

But there's also a comic book in the US, one that could perfectly well feature these characters. But they don't, because they're using material originally prepared for the television show to help put the comics together. These poor characters never get featured and remain largely unsung.

To add another layer of irony, the toys were NOT sold in the UK, but in order to get some characters that they could muck around with without fear of screwing up the US continuity, they managed to feature in the UK comics anyway!

What a tangled web.

Are you sure the deluxe Insecticons weren't sold in the UK? They were regularly available here in Holland, just as Roasbuster, Whirl etc. They were sold with MB (Milton Bradley) stickers on them though, they were the distributors for these. I think in the rest of Europe or at least the Benelux as well.

As for the covers, I always figured they were done by Herb Trimpe, because of the way Blaster appears in his cartoon model, and the way Megatron's helmet is drawn. But it can certainly be Perlin as well, Ian Akin and Brian Garvey have such a characteristic inking style that it's really hard to tell who the penciller is.

There are early cartoon ads to be found on the internet that have Megatron in this form, his helmet is colored black in them as well. And there's one with Jetfire in his Macross Valkyrie mode, too. Early animation, I suppose from before the models were "cleaned up" by Floro Dery.

Back in the 1980s, Hasbro's UK and European divisions were pretty separate, each free to do what they wanted, comapred to the amalgamated Hasbro Europe that exists today.

One of the things Hasbro UK did was drop virtually all the non-Takara toys from the line, excepting Jetfire. At the time Bandai UK (as opposed to Tonka in the US) were directly releasing the Robo Machine/Go-Bots toys, so they may have played a part in stopping Hasbro inadvertantly sell their own product for a rival's line... If that makes any sense!

Of course, Hasbro UK also dropped a surprising number of Hasbro/Takara figures throughout 1985-1989, so there's no absolute consistency. Many of these dropped items were likewise available in Europe, like the Constructicons, Blaster, etc.

I can only assume Hasbro UK were providing Marvel UK with all the raw printed material from the US line before they gutted it for the UK market!

Hans, i couldn't even find the Deluxe Insecticons in Canada! I had to buy them when we visited the US.

As a kid, i loved this series, but now the much more comprehensive and better drawn Dreamwave series is SO much better!

That stupid Pat Lee! I really liked the way the Dreamwave stories were fleshing out-to me so much better than IDW (but i'll take what i can get)