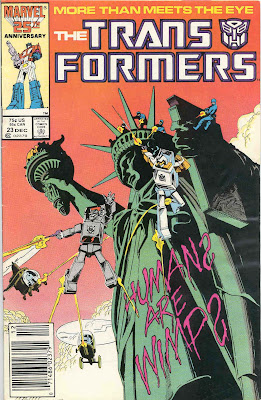 Decepticon Graffiti! is the twenty-third issue of the Marvel G1 ongoing Transformers series. The creative lineup is mostly unchanged from the last issue: Budiansky as writer, Perlin as penciler, Akine & Garvey on inks, and Yomtov on colors. Chiang returns to lettering duties after skipping an issue. Trimpe provides the cover.

It's a decent cover - the Battlechargers battling some humans by the Statue of Liberty, which has been defaced to say 'HUMANS ARE WIMPS' in sloppy handwriting. There's certainly nothing wrong with it, and it does cover an event depicted in the issue, but it fails to grab me much. It's not very dynamic. Possibly if we saw them just about to vandalize the statue, we'd have a bit more tension.

Once inside the issue, though, we're treated to a better than average tale. It begins with Circuit Breaker experimenting with Skid's brain, much to Finkleberg's chagrin. He thought they were going to interrogate and incarcerate Skids, not dissect him. Donny realizes how bad things have really gotten now, though; Circuit Breaker has captured 13 Transformers, all of them Autobots. 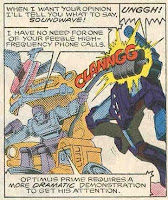 Megatron, meanwhile, seems to be degenerating for no apparent reason. After his triumph of leadership and logic in issue #19, now he seems sullen and more unreasonable than usual. (The UK would go out of their way to explain this with a failed Straxus mind-meld, which would itself be further retconned, but to the US reader the change in characterization is jarring.) He's summoned Runamuck and Runabout from Cybertron to deliver a challenge to Optimus Prime. When Soundwave points out that it'd be easy to do it via radio, he gets a face full of muffler for his troubles.

The Battlechargers, while not too bright, still realize that perhaps spending too much time with this tin-plated tyrant would not be good for their health, and decide to have some fun on Earth instead. When they observe a young boy put some graffiti on a wall, they become inspired. The pair begin following Noah and his family around, spraying Cybertronian letters all over the country. It's a silly plot, but the banter between Runamuck and Runabout sells it well. Bob seems to have so much fun writing them, it's surprising that he doesn't ever use them again after this issue.

R.A.A.T., of course, makes the connection and moves to stop the errant twosome. Though they arrive too late to save the Washington Monument, Noah and his folks make the connection between their vacation and the Decepticon attacks. Thus forewarned, R.A.A.T. moves to attack them at Philadelphia, the next stop on their itinerary. The battle does not go well, though. There are too many civilians around, which prompts R.A.A.T. to break off the attack. Most of R.A.A.T., anyway. Josie is too caught up in the battle, and her action put Noah in harm's way. When she realizes her error, she'd inured protecting Noah and ordered to get some rest.

Back at base, Donny and Josie commiserate at their relative ineffectualness. Donny keeps trying to convince her that the Autobots can help her, but she remains skeptical. Besides, she ruminates, even if she wanted their help, it'd take days to put them back together. Oddly, Donny has a preposterous plan that apparently is easier: linking them up to her suit. And so, we move to the awkward climax at the Statue of Liberty. Runamuck and Runabout have finally figured out why the Humans are merely baffled and not angry at their literary prowess: Humans don't read Cybertronian. Thus armed, they scrawl out another scathing insult: 'HUMANS ARE WIMPS'. It's especially funny, since they spent most of the issue going on about the subtly of their wit.

R.A.A.T. proves ineffectual, unsurprisingly. However, Circuit Breaker is here to save the day! While rebuilding some of the 13 Autobots would take too long, apparently it's easy enough to build an entirely new robot out of Autobot parts, and link Josie to the robot on what appears to be an enormous circuit board. It's not the most credible solution to the problem at hand. This amalgamated being manages to blast the Battlechargers into the Hudson River. (Incidentally, they would apparently remain their for several years, until Shockwave fishes them out to join his own army of Decepticons some time before issue #71.)

Josie and Donny both get canned despite their sucess. It seems that, in order to secure their cooperation, they agreed to let ALL THIRTEEN Autobots go. While we the audience know that this is for the best, one wonders what Circuit Breaker could be thinking - how could defeating two robots intent on vandalism be worth letting 13 go? It's another weakness in the story. While Circuit Breaker swears vengeance on all robots, Donny is happy enough to go back to what's left of his life. He's still got $50K in his pocket, after all. But when he sees the Statue of Liberty will require $45 - 60K in repairs, he decided to finance the whole thing himself. Exit Donny, stage right.

This issue is a mixed bag. The Battlechargers are an absolute delight. They're fun, violent, whimsical, and genuinely seem to enjoy their time together. Their delusions of intelligence only add to the fun. Donny, on the other hand, completes his story arc here. His decision that his complicity in allowing the Statue of Liberty to become covered in graffiti warranted a forfeiture of his blood money shows that he has come a long way from the man who'd sell out humanity for a few more days of life. Still, it's hard to care much. The logical gaps in Circuit Breaker's decision making process are extremely hard to swallow. Noah is a fun kid, mirroring in some ways the Decepticons following him about. I like that he's wearing a Spider-Man shirt, which to my mind further distances Transformers continuity from the Marvel continuity proper. (Yes, I know, it's conceivable that someone in the Marvel Universe could wear a Spider-Man shirt, but I don't think that was the point.) I think the good outweighs the bad in this. The overall sense of fun makes the issue worth it.

this is one of my favourites issues in the TF run; a self-contained issue.

Stan Lee reportedly liked the issue according to Bob Budiansky himself.

I liked Megatron's twisted conception of what constitutes an "opinion".

This was another issue that I had when I was a kid, so I've pretty much got it memorized cover-to-cover.

I agree the cover isn't too dramatic, but what really bothers me that the Battlechargers are writing in English on the front cover, but in Cybertronic language inside the pages of the comic. (That said, you've gotta love Runamuck and Runabout——the original Beavis and Butt-Head. Too bad Budiansky only wanted to play around with them for a single issue of the comic.)

The Autobot conglomeration is so poorly-designed, from a creative standpoint. Somebody really should have taken the time to make it look like it was actually constructed out of the Autobots that Circuit Breaker had captured, and not some generic Omega Supreme-looking thing.

This comic was also topic timely because it coincided with the real-life State of Liberty restoration from 1984-86.

Heh, the Autobot conglomeration should have looked something like Autobot X :P
(yes I know, Perceptor, Blaster etc. weren't part of it)

...but what really bothers me that the Battlechargers are writing in English on the front cover, but in Cybertronic language inside the pages of the comic.

Not at the end. When they reach the statue they are very proud that they have learnt to write in English.

WOW! I guess i'm in the minority here, but i hated this issue. To me, it is the mindless drivel that made the UK comics head and shoulders better.

It always bothered me that even a...disturbed Megatron would smack Soundwave (his most loyal officer).

Also, the Battlechargers seemed like naughty children in need of a spanking rather than the menace the Decepticons are.

Also, i thought that Circuit Breaker would begin to have a change of heart after this issue (especially when "Autobot X" saved her by deflecting a shot), but this doesn't happen-making no forward progress in the series to me.