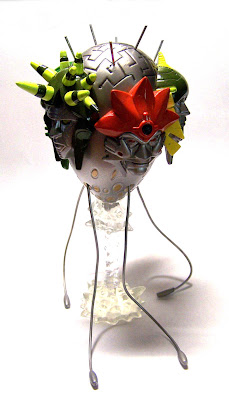 I don't normally write reviews of unofficial products, but every once in a while something so phenomenal comes along that I simply have to share my thoughts about it—especially when it's so surprisingly well-made, particularly for an unlicensed toy.

The Quintessons, to this day, remain the most significant characters in the Transformers mythos who have been consistently ignored by Hasbro and TakaraTomy. Originally introduced in The Transformers: the Movie, they went on to become major players during the third season of the G1 cartoon—a major threat to the Autobots that rivaled even the Decepticons, and particularly dangerous due to their intimate knowledge of both parties since they were, in fact, the creators of all the Transformers on Cybertron. No official toys of the Quintessons from the movie were ever made, probably due to the simple fact that the characters don't transform, and as such may not have belonged within the Transformers toy line proper. Furthermore, they've never been approached even for the figure assortments that don't transform, like the Super Collection Figure line from Japan or the domestic Robot Heroes. (The closest thing we ever got was the Alpha Quintesson toy from Transformers: Energon, but it bears blessed little resemblance to anything from the animated film.)

When I discovered that Impossible Toys had actually produced a series of Quintesson-inspired figures, I was immediately skeptical. I've seen my fair share of poorly-designed kitbashes and garage kits over the years, and at first I wasn't expecting these to be any different. After all, I thought, if it's not an official Hasbro or TakaraTomy product, how good can it possibly be? Well, let me tell you that I've totally adjusted my way of thinking. When it comes to producing something like this, though, not having to worry about getting Hasbro's official stamp of approval can be both a blessing and a curse. On the one hand, it allows the freedom to fulfil a demand in the marketplace that the official sources refuse to address—and do so in a way that doesn't have to be bound by child safety regulations or fitting into a rigid price point structure. On the other hand, it also means that even when you're playing around with someone else's intellectual property, you can't use any official logos or trademarks without risking the threat of an infringement suit, which is why this product and its packaging is completely devoid of Hasbro-owned names (though you might recognize one of Neale Davidson's fonts that bears a striking resemblance to the logo of a toy line we all know and love). This beautiful collector piece is truly a work of art, and it has taken permanent residence on display with my assorted G1 reissues—right where it belongs. 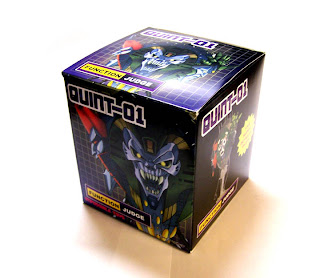 The version of Quint-01 that I got came unassembled, packaged in a full-color, square-shaped box that's about four inches on all sides. It pictures artwork by Dan Khanna of BotCon fame as well as photos of the product itself. There's even a biography on the back that does a fairly good job of describing the role of these five-faced baddies without using a single proper noun (as fans who are all too familiar with the franchise, we fully understand the casual references to "robotic slaves" and their intent to "invade and colonize new worlds"). The bio also identifies each of the faces by name, taking its cue from the names Simon Furman assigned to them in the Transformers: Ultimate Guide. There are even numerical tech specs to go along with the brief profile, done up in the same style and color scheme as the official tech specs from the 1989 toy assortment. (I have to question some of the ratings—why would they have a Speed of nine when they can barely outrun Transformers on foot? Why would they have a Rank of only seven when they're the masters of the Transformer race? However, the packaging is just icing on the cake; the figure itself is what's really important here. The thing could be shipped in a plain brown box and it would still make me giddy.) 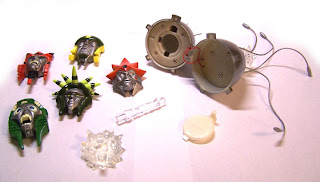 Inside the box, Quint-01 is resting comfortably in a vacuum-molded bubble, the exact same kind that come with the official carded toys. This helps to protect the toy during its (likely) overseas travels to you, and speaks favorably towards the professionalism of Impossible Toys that they would go to such lengths to carefully package their product. Quint-01 comes unassembled, with a two-piece clear energy base that snaps together easily and several antennae that are included in a little baggie, designed to fit in the top of his egg-shaped body. There are also two small three-volt watch batteries along with instructions on how to install them. That's right—this guy is also electronic! How cool is that? The Quint-01's faces actually hold its two body halves together; removing the faces allows the body to come apart and grant access to the battery cover. It's not as complicated as it sounds, though the instructions warn you to do this carefully so as not to accidentally pull the wiring out of its moorings—how thoughtful! 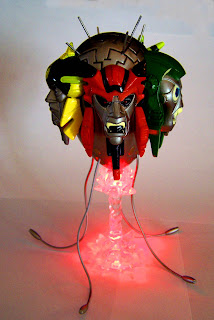 Fully assembled, Quint-01 stands about six inches in height, and is reasonably to scale with most of the 1986 toys that he would conceivably interact with in a display or diorama setting. (Galvatron still towers over him, but Galvatron towers over everybody.) He has four tentacles that are actually plastic-coated electrical wiring, which means they're poseable to a certain extent (they will also retract into his body if you like). Each of his five faces mounts on a peg of a specific size and shape that corresponds to the mount on the back of each mask, so there's no confusion over which face is supposed to go where. To activate the figure's electronic features, press the square-shaped button on the top, which is cleverly hidden amongst the circuit-like designs, and it will click like a ball-point pen to activate the LED light in the bottom of the figure, illuminating the translucent energy base. The light is bright enough that it does a nice job of lighting up the entire energy base, giving the illusion that Quint-01 is floating under his own power.

The quality of this thing is astounding. I am an avid collector with over 3600 pieces in my collection, so you can probably imagine that I know a thing or two about toys. I know shoddy workmanship when I see it—and there's none of that to be found here. The tolerances for all the parts that fit together are very good, which means nothing feels too loose, nor does anything feel like I'm putting stress on the plastic when I assemble it. Not only is the color scheme accurate, but the technical proficiency that is demonstrated through the application of these colors also deserves a mention. The individual faces weren't just painted with a hobby brush in somebody's basement—there's very slight evidence of overspray on some of the parts, which means the deco was applied using paint masks that were die-cut specifically for this production run. There are also mold release pin marks on the inside of each face, which means this figure was actually produced in a factory using a machine that spat the finished parts out of the die-cast molds with ejector pins. In short, even though this is an unlicensed bootleg, it was produced as though it were an official product. (Actually, let me amend that slightly. If this were an official Hasbro product, they'd likely have left off a few paint applications in order to cut costs, but there's no evidence of that whatsoever.)
Note: Click the image to the right to see an animated GIF showcasing all five faces of the Quint-01 figure! 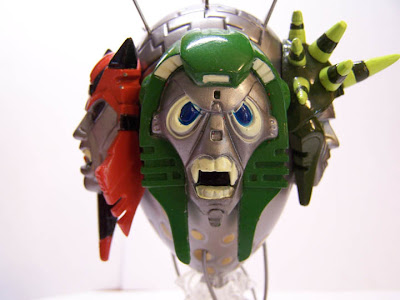 The only complaints I might have are about the extremely delicate nature of the six antenna-spikes that fit on the top of the figure. They're made of hard ABS plastic and measure about a sixteenth of an inch in diameter, so you can imagine that they're quite brittle. I was unfortunate enough to accidentally drop the figure shortly after assembling him, and five out of the six spikes snapped in half. Being the resourceful fellow that I am, I fashioned replacements using sections of a paper clip that I cut to the right size, bent the ends slightly to get them to poke out at the right angle, and painted them silver to get the sheen to match. Of course, now the thing could be used as a deadly weapon because it's got needle-like metal prongs jutting out in all directions. Me, I would really have made the spikes out of a softer, less brittle plastic. Also, I've been very careful in this review to refer to this gorgeous collectible as a "figure," not a toy, because I really wouldn't recommend it for children of any age. That said, it's clearly not meant for kids in the first place—it's meant for kids-at-heart, like the people who are reading my reviews.
Although the five-faced Quintesson judge who presided over court trials in The Transformers: the Movie seems to be the creature that most readily springs to mind when the Quintessons are mentioned, there seem to be several different species that make up the collective Quintesson clan. Impossible Toys have done several other toys based on Quintesson characters, including Quint-02 (aka the Quintesson scientist named Inquirata, who appears in the episodes "The Killing Jar" and "Forever is a Long Time Coming"); the Quint-03 (the single-faced Quintesson leader); the Quint-04 (the executioner who throws the switch to drop defendants into the Sharkticon pits) and the Quint-05 (the bailiffs who escorted Kup and Hot Rod to their cell in the movie).
These are collector pieces and are not cheap. At the time of this writing, you can find them for around $40 or $50 on eBay (I got mine for a lot cheaper, but it came as part of a bulk deal with a couple of other figures). The Quint series has actually been discontinued by Impossible Toys, so right now the only place to get them is on the secondary market. They are gearing up to produce some larger and even more ambitious figures, though—and as a loyal customer, I eagerly anticipate their release. Look for reviews of some of their other products soon!
Zob
Posted by Zobovor at 9:28 AM

I agree with you, Zob. These are great figures. I have one of the earliest versions of the Quintesson Judge, a try-out to see if there was demand for these, it didn't even come with a box. It sounds like the actual production version is exactly the same though. I believe they refer to Quint-03 as the prosecutor, by the way :)

Also, Quint-05, the Bailiff, hasn't been released yet. I have pre-ordered it for the longest time, but even BBTS lists it as a pre-order still, just like the Nightbird figure which Impossible Toys was also supposed to make. I hope these will get released eventually. We need to complete the set, after all! Inquirata is my favourite, they really captured his likeness/cartoon model perfectly.

Let's see if Alpha Trion eventually gets released as well :)