“Dinobot Hunt!” part 3 was, naturally, scripted by Simon Furman. The pencils were provided by Will Simpson, the colours by Stuart Place and the letters by Mike Scott. Ian Rimmer continued his editing duties.

The cover is by Geoff Senior and it is by far the best hook for an issue of “Dinobot Hunt!” so far. Slag, in triceratops mode, thunders towards the viewer while Jetfire grapples with his horns like a matador in order to bring him to the ground. Senior really excels in giving his Transformers personality and almost organic looking expressions - the strain and determination on Jetfire’s face is palpable. With a bit of artistic license and some expressively narrowed eyes, he also manages to make Slag’s usually fairly expressionless dinosaur mode look especially mean. The two characters pretty much fill the picture and completely dominate it, while the background is generic desert and dust clouds thrown up by this titanic struggle. This is one of my favourite covers for a while and I think it really hits the spot. I don’t even mind the typically sensational “Robot rustlers!” tagline, blazing across the bottom of the frame.

The issue begins with Soundwave and the other Decepticons in the Idaho desert, investigating signs of a fire fight. Clearly the Autobots and a Dinobot were involved, and Laserbeak is missing, but the only piece of debris they can find is a much larger Decepticon symbol than Laserbeak carries. Following this trail, they find Laserbeak, damaged, on the ground. He indicates with a “Raak!” that he is functional enough to transform and make a report, so, in tape mode, from Soundwave’s chest unit, he relates the events that led to him being damaged.

Laserbeak had detected Slag moving at high speed, pursued by two humans on horseback. His conclusion was that they were presumably suicidal. He judged that the humans provided no threat or obstacle to the eventual capture of the Dinobot, so he was content to continue observing. The two humans, who were clearly cowboys, complete with ha 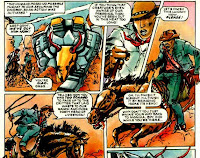 ts and lassoes, argued about what to do. Slag has apparently rampaged through their ranch and devastated over forty of their cows. The more courageous of the two humans hooked Slag with his lasso and managed to pull himself onto the Dinobot’s back. As this futile struggle went on, Laserbeak noted the arrival of an Autobot shuttle.

It landed and a team consisting of Jazz, Ironhide and Jetfire disembarked. Immediately they saw that the humans were in trouble and decided to help them, but not before Ironhide expressed his distrust for Jetfire and his Decepticon symbol. Jazz managed to shut him up by pointing out that Prime trusts him, and that should be enough. Ironhide seemed satisfied with this explanation and apologised. This character-establishing argument over with, the Autobots moved out on their mission.

Laserbeak looked for another vantage point and observed the humans continued struggle with Slag. One of them, now established in dialogue as Greg, fired his rifle point-blank into Slag’s neck area. Naturally it didn’t even scratch the Dinobot and exploded in Greg’s hand. Slag did, however, notice the shot and pulled up quickly, launching Greg over his head, still attached by the lasso. The Autobots arrived, telling the other human to get clear, and that they would rescue his brother. Laserbeak notes that Jetfire immediately took charge saying that “his capacity for fast decisive action is considerable” and that “if he could be returned to the ranks of the Decepticons he would be a powerful warrior indeed”.

The Autobots got Slag’s attention by firing into his path and goading him into charging them. As Ironhide dived out of the way, Jetfire was able to grab the Dinobot by the horns and wrestle him to the ground. Jazz was then, at that point, able to extract Greg from Slag’s back and move him to safety. Unfortunately for the Autobots, the extra time it took to save the human meant that Jetfire’s strength was no match for Slag. The Dinobot threw him off and was able to blast Jazz with his flame breath before the luckless Autobot was able to bring his own weapon to bear. Jetfire, distraught at Jazz’s injury (and possibly death) charged Slag head-on, cursing the Dinobot’s name, and getting himself impaled on one of Slag’s horns.

Laserbeak tells the Decepticons that at this point, he was so anxious to see the turncoat, Jetfire, killed, that he broke cover to get a better view. Unfortunately for him he landed too close to Ironhide, who hit him with a blast from his stun-gun. Just as Jetfire was about to be roasted alive by Slag’s flame breath, Ironhide was able to toss him the stunned Decepticon. Jetfire stuck Laserbeak directly into the Dinobot’s maw, blocking the flow of white-hot fire, and causing Slag to overload, shutting down.

Laserbeak’s memory ends there, but he speculates that the Autobots were probably able to retrieve Slag and leave the area - he accepts full blame. Soundwave, in a display of generosity that he probably wouldn’t extend to a Decepticon who doesn’t actually live in his chest, tells him that there is no blame to level, and tells Laserbeak that the “Autobots will pay for the indignities” heaped upon him this day. We see that Sludge is still in Decepticon custody, strung up, unconscious on a twisted web of machinery. Soundwave seems to slide into full super villain mode at this point -ranting rather anally about how many Autobots will die in the upcoming conflict (he thinks there is a ninety-one per-cent chance of ten, but is certain of at least three). This is supposed to be a dig at Shockwave’s overly analytical approach to things, but since we already know Soundwave as a pretty reserved and emotionless leader, it falls somewhat flat.

But wait! Did I say “reserved and emotionless”? Over the page it appears that c

ommand has gone to Soundwave’s cerebro-circuits, as he actually refers to his Autobot prisoners (Gears, Windcharger and Cliffjumper from the previous issue) as “my beauties!” as he laughs at them. It’s a good job that none of them are female, or Soundwave would be looking for railway tracks to tie them to at this point, possibly while wearing a top hat and twirling a moustache.

And, for a shock ending, we see Prime back in the Ark. He receives a message from Prowl, relaying a panicked report from Sideswipe that seems to indicate that something bad has happened to Bluestreak and Huffer before cutting off. “Sideswipe!” yells Prime, as the screen dissolves into static.

This issue is an improvement over the previous one, while not being overly complicated. Furman makes the fight to capture Slag more interesting by having Laserbeak’s report as a framing device. The action is fast and well-realised, and I very much like the final method of defeating the Dinobot. It seems odd that the little Decepticon isn’t damaged more severely by receiving a blast of Slag’s breath at point-blank range, but that is merely a pointless quibble. The humans are idiots, but fun idiots. Who could fail to be entertained by cowboys fighting a mechanical triceratops? This all serves to make the story more interesting than it actually is. The Autobots capture Slag with no casualties and we are told that the Decepticon status quo established at the end of Part 2 hasn’t changed. This part could have been shrunk or excised without really damaging the overall arc, but it is certainly an entertaining read, and that’s what we want out of our comics, and therefore it succeeds in it’s aims. My only issue with it is the rather uneven characterisation of Soundwave, who is, admittedly, a rather more emotional character in the comics than he is in the cartoon, but doesn’t usually chew the scenery with quite so much gusto (it is especially hilarious if you imagine him saying these things in Frank Welker’s voice). The ending is suitably exciting, and given that Soundwave has previously mentioned Grimlock, we can be pretty sure that the story is coming to a head next issue.

Will Simpson’s work on Transformers continues to be good. It, along with Place’s colo 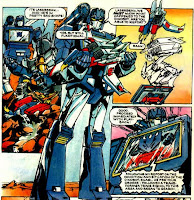 uring render the artwork a little more blurred and impressionistic than I personally prefer, but it is undeniably well done. The horses, always a notoriously difficult creature to draw well, are brilliantly realised, as are the humans. Simpson’s work on the more organic characters is beyond reproach, but his robots, while competent, fail to excite me, beyond the occasional panel - the full length shot of Soundwave holding the damaged Laserbeak, is, for example, very good. The colouring is still top-notch and the lettering, while not being overly dramatic, conveys the story perfectly well.

Overall, a decent issue, and a decent part of “Dinobot Hunt!” - a not particularly essential use of eleven pages, but one well worth reading, and the cliffhanger at the end is very intriguing.

Next week: "Dinobot Hunt!" concludes.
Posted by Bishbot at 3:37 AM