Zob's Thoughts on the Transformers Decoys 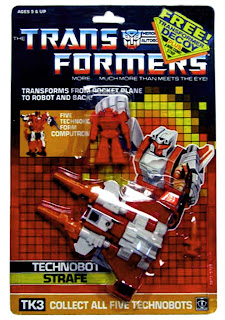 By 1987, it appeared as though Hasbro had just about given up on the original characters who had helped to make Transformers a success, despite the fact that these familiar characters had carried the toy line for half of its then four-year life span—and were the stars of the cartoon series for two lucrative television seasons. With retail toy shelves now filled with the likes of Headmasters and Targetmasters, Hasbro took the opportunity to come up with a merchandising promotion for the smaller, carded toys available on the market, along the same lines as the Minispies that were sold a couple of years previously. Not surprisingly, they turned to Takara for products that had been produced for the Japanese market that might be useful for Hasbro to offer domestically—and they found just the thing. The Transformers Decoys, as they were called, paid tribute to the characters from 1984 and 1985—despite the fact that many of these characters had been killed off in both the cartoon and in Marvel Comics to make room for new, more exciting toys. 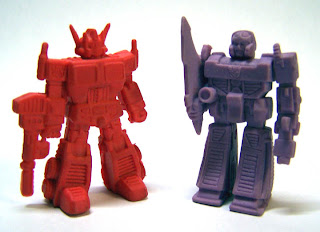 The Decoys were tiny figurines about one and three-quarter inches in height, cast from a flexible rubbery material. (Many kids probably mistook them for pencil erasers, even though they weren't actually designed with this in mind.) The Decoys came packaged with all of the carded Transformers from the 1987 offering, which includes the Throttlebots, the first toys to offer the promotion; repacks of the mini-vehicle Aerialbots, Stunticons, Combaticons, and Protectobots, who had been offered previously; and finally the small Technobots and Terrorcons that were released later that year. Given that there were only 30 toys available in this format, but that there were over 50 Decoys to collect, the only way to acquire a whole set was to buy multiples of some toys, or trade with your schoolyard pals for some Garbage Pail Kids cards or M.U.S.C.L.E. men. I was a big fan of the Decoys, personally, and I have fond memories of digging through the pegs at the toy store—not because I was searching for a particular Throttlebot, but because I was hunting for specific Decoys that came randomly packaged with them! 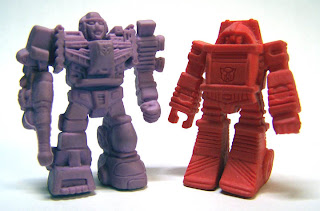 The Decoys had been previously developed by Takara, intending them for use as playing pieces for board games. To that end, they offered both a Cybertron (Autobot) collection and a Destron (Decepticon) collection that were sold as multi-packs with 22 characters apiece (plus an additional nine-figure set that included some of the leftover Autobots). Most of the toys from 1984-85 who also appeared on TV were represented as Decoys, with a few notable absences. Pretty much all the Autobots from that time period got a Decoy, but there were a handful that didn't make the final cut. Only five of the six Mini Autobots from 1984 got Decoys in their likeness (there is no Decoy of Gears), and none of the Mini Autobots from 1985 were included. Also, Skyfire was deliberately omitted (his toy was not sold as a Transformer in Japan); Omega Supreme also got left out. Meanwhile, the Decepticons were missing fully half their air force, since no Decoys were ever produced of Dirge, Ramjet, or Thrust. Also, while there were separate figures made for Starscream, Thundercracker, and Skywarp (whose Decoys are only visually distinguishable from each other by the way their arms are positioned), Rumble and Buzzsaw did not get their own figures (only Frenzy and Laserbeak did). Laserbeak, incidentally, is notable as the only character from the original Japanese series who did not make an appearance in America. Each Decoy was stamped with a collection number on his back, which corresponded to the order his name appeared on the back of the pack-in checklist. (A few Decoys actually had two separate numbers stamped on them because Takara had used a completely different numbering system prior to Hasbro's.) 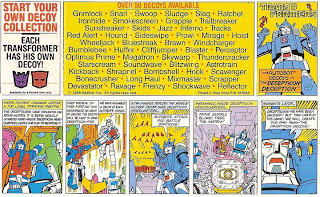 The toys that came packaged with Decoys also included a mini-comic that explained the reason for the existence of the Decoys. The comic focuses on characters from The Transformers: the Movie, suggesting to me that it was developed in 1986 when the movie characters were still on the forefront of Hasbro's mind. The story, such as it is, involves Galvatron having stolen the Creation Matrix and the Autobots' plan to recover it by bombarding the Decepticons with an army of Autobot Decoys in order to secretly accomplish their objective. The mini-comic is infamous for referring to Ratchet as First Aid—probably because some editor realized that Ratchet had been killed during the events of The Transformers: the Movie and replaced his name with the name of one of the Protectobots who was still alive (and whose toy was still in stores). Indeed, the comic totally glosses over the fact that most of the characters actually available as Decoys were dead when this story supposedly took place. (Note that Ratchet/First Aid is holding a Decoy of Ultra Magnus, who was not available during this promotion.) 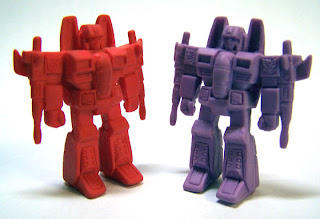 The appearance of the Decoys varied considerably. While some of them were sculpted to resemble the characters as they appeared in animation, others were based directly on the transformable toys. Still others ended up looking like a strange amalgam of both designs (the Decoy of Brawn, for example, has one regular fist and one giant claw). Megatron is particularly interesting, since he was given a sword accessory, as per the version of the toy sold in Japan, rather than his trademark fusion cannon. Also, little regard was given to the scale of the respective characters; the Decoy of Devastator was the same size as the individual Constructicons. The color scheme for the Decoys was fairly straightforward—Autobots were red, Decepticons were purple, representing the color of their faction symbols. Despite this, the Decepticon Decoys were also available in red early on in the production run. Despite being the "wrong" color, these Decoys are among the most valuable to collectors because of their rarity. Indeed, Decoys in general have become increasingly difficult to find these days. Due to their small size they were easy for kids to lose, and their rubbery construction meant they were fairly easy to damage. The proliferation of fan customizers, who enjoy painting them to more closely match the characters, also took a great many of them out of circulation from the secondary market (Dave Van Domelen gained notoriety for painting dozens of them for attendees of BotCon '97).

Additional versions of the Decoys were eventually produced in Japan, including Decoy versions of characters from The Transformers: the Movie like Rodimus Convoy (Rodimus Prime) and Galvatron, as well as extra-large Decoys representing the Scramble City combiners (Superion, Bruticus, Menasor, etc.) that were available in different colors like blue and yellow, but these were never sold in America.

You know, I could totally go for a re-release of the decoys in sets, as they were in Japan, including those we didn't get.

Damn these are fun! The Robot Heroes of their day. I have many miscellaneous Decoy figures (non-transformers) but would love to get some of these. They should totally rerelease. Would also be cool to see them painted, some have pretty nice scuplts.