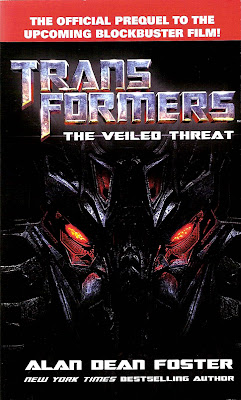 As of this writing, Revenge of the Fallen is still a month away from its theatrical debut, and the toys are still several days away from their official street date launch. Like a junkie in need of a fix, I've been jonesing for something—anything—new and Transformers-related to help curb my insatiable hunger pangs. Transformers: The Veiled Threat by Alan Dean Foster is a little bit like a plate of potato skins loaded with cheese and bacon bits. It's not at all a requirement to enjoy your dining experience, but it's something satisfying to gobble up while you're waiting for the main course.

This is a prequel to Revenge of the Fallen, which means it takes place in the interim between the first and second movies. Some knowledge of the movie universe is required to fully enjoy the story, since there are numerous references sprinkled about to events from the first film, like the dissolution of the Sector Seven agency, the battle at Mission City, and Bumblebee's adventures with Sam Witwicky (neither of whom appear in the prequel novel, incidentally, probably because it would interfere with the events of Revenge of the Fallen). In addition to multiple novels in the sci-fi genre, Alan Dean Foster was also the author of the novelizations of both the 2007 Transformers novelization as well as the Revenge of the Fallen adaptation, so he's had some experience playing around with the Transformers characters and the universe they inhabit.

The tricky thing about prequel stories is that they have to fit within the existing framework of a larger story. This is something of a double-edged sword since the prospect can be both a lot of fun and also very frustrating—for both the author and the readers. It's a bit like another revenge-themed story called Star Wars: Episode III—we know going into the movie that Anakin Skywalker's going to become Darth Vader. There's no way around it—it's not like George Lucas was going to pull a fast one and go, "Surprise! It's really Padmé Amidala under the mask!" There's a saying, though, that it's not the destination that's important, but the journey. Watching Anakin's descent to the Dark Side is what's compelling, even if we already know what happens to him. The same sort of mindset, then, is required for The Veiled Threat. We already know, essentially, what the end result of the prequel novel will be (i.e., nothing that disrupts the status quo) so the question is whether or not the journey itself is enjoyable, even if we're fully aware in advance of where we'll end up.

The story revolves around the activities of NEST, the joint human-Autobot organization that replaced the defunct Sector Seven and which is charged with the location and eventual defeat of the hidden Decepticons on Earth. To that end, they've recruited Captain Lennox and Master Sargeant Epps from the first movie as well as newcomers Kami Ishihara, a robotics expert, and Petr Andronov, a specialist in artificial intelligence. They're working on locating Starscream, aware that he's recruited new Decepticons in the absence of Megatron but are having difficulty pinpointing his whereabouts. Eventually, they discover that the Decepticons are secretly targeting unguarded energy reserves, theorizing that they may be collecting enough raw power to restore Megatron's depleted life force. Very, very late in the game (starting on page 238 of the 281-page book) we also learn that a human criminal named Bruno Carerra has forged an alliance with Starscream in an attempt to capture and destroy Optimus Prime, but his participation seems like an afterthought, and both he and his plan are quickly dispensed with.

Autobots like Optimus Prime and Ironhide take center stage, but there are also new characters like Knockout, an impetuous young motorcycle (who will also be available as a Hasbro toy) and Salvage (a Hasbro toy from the 2007 off-screen toy assortment) and Beachbreak, who turns into a Jet Ski (an invention of the author's who only appears so there can be Autobot casualties that don't affect the existing movie cast). It's implied that Starscream, meanwhile, is pulling some strings from behind the scenes—he's mentioned frequently throughout the book as the de facto leader of the Decepticons, but he doesn't actually get involved until the end. Most of the other Decepticons who appear are generic baddies who only show up so they can get destroyed, boasting names like Macerator and Ruination and Trample, though our old friend Barricade does make a cameo at the end. There's also a sub-plot involving ex-agent Simmons, formerly of Sector Seven, experimenting on the disembodied head of Frenzy, which he snuck off with following the events of the first movie, retreating to his basement in the hopes of discovering how he ticks. I was half-hoping to see some of the new characters from the second movie in action, but none of the new Autobots (Arcee, Mudflap, Skids) or Decepticons (Soundwave, Ravage, the Constructicons) appear in the prequel.

Unlike the previous prequel novel, Ghosts of Yesterday, the second prequel is structured more like the first movie, focusing predominantly on the humans of the story, with the Transformers serving as secondary characters. There are very few scenes with the Autobots or Decepticons interacting amongst themselves, which I find unfortunate. Given the considerable lack of characterization for the robots in the first movie, the first prequel novel really helped to flesh out the characters (particularly the Decepticons and their compelling struggles for dominance in the hierarchy). Once again, Megatron remains absent during the events of the story, though he's alluded to several times—the Decepticons outwardly acknowledge and accept that he's dead, though it's hinted that the energy they have been collecting from various sources throughout the world will eventually lead to his ressurection. The late, lamented Jazz gets a mention or two, and Sam Witwicky's absence is also briefly expounded upon (he passed up several government positions in order to attend college, which of course sets things up for the next movie).

The Autobots are painted as sympathetic heroes, disguising themselves as Earth vehicles mostly for the benefit of the human population, who—outside of the NEST organization, at least—have some difficulty coping with their alien robotic nature. They regard the human race as quaint and primitive, but feel bound to protect them, despite the fact that this puts them at a strategic disadvantage at least twice in the story. The Decepticons, meanwhile, live up to their name in a grand and glorious way, concocting elaborate schemes designed to mislead the Autobots as to their true objectives, often with lethal results. (This is not to say they're depicted as stereotypical villains. The funniest scene in the novel is when two of the Decepticons start doing an unwitting impression of the Goofy Gophers from the old Warner Brothers cartoons.) Also, it's suggested that there are actually a couple of Decepticon factions operating—that there's a second group who is not loyal to Starscream and that they are the ones attempting to ressurect Megatron.

There are a handful of interesting details in the book regarding Transformer physiology and culture, many of which have been borrowed from earlier canon, intentionally or not. We learn that the Autobots routinely eat scrap metal in order for their bodies to fashion it into ammunition for their built-in armaments. This is not an entirely new concept to Transformers—the two-headed Terrorcon leader, Hun-Gurrr, was known for gobbling up raw materials with one mouth and spitting it back out in the form of crude missiles from the other mouth. Applying this concept to the Transformer race as a whole is somewhat unsettling, but at least it explains why these guys never seem to run out of ammo. The concept of the holographic facsimile drivers, as seen in the first movie, is further explored here. This is revealed to be the one detail of their earthly disguises that the Autobots need help with, as evidenced by Knockout's painfully stereotypical Rebel Without a Cause-inspired rider.

As a rabid fanboy, I have to admit that there are a handful of minor details that bothered me. The novel places heavy emphasis on the fact that in their vehicle modes, Transformers are completely indistinguishable from manmade machines, noting that they duplicate their vehicles of choice right down to the manufacturer's logo. This clearly can't be the case, since we know that many of the movie characters have Autobot and Decepticon insignias (like Prime and Ratchet and Barricade) that obviously aren't part of the original design. Also, at one point there's a reference to Starscream's wings turning into his feet. (At least a passing familiarity with his on-screen film appearance would reveal that this is clearly not the case.) Also, the appearance of Longarm as an Autobot in this story raises some interesting questions, since the Hasbro toy named Longarm was based on the non-living tow truck that Mikaela drove in the first movie. Does this retroactively mean that Longarm was "really" in the first movie? (Remarkably, he survives to the end of the story, which is a rarity for off-screen characters in this book.)

Overall, the prequel novel is good for a quick, fun romp in the Transformers movie universe, but it does little to establish important plot points or lend useful characterization to the on-screen characters (probably the Transformer who gets the most attention is Knockout—while he will be available as a Hasbro toy, but won't be appearing in the movie proper). Buy it if you've got six bucks burning a hole in your pocket and can't wait for the movie to come out, but otherwise I advise sitting patiently with your napkin in your lap. The main course will be brought to your table in due time.

I don't think I'll be picking this book up since I haven't had much luck at all with other Transformers novels (The Keeper Trilogy and Legends). Is it on par with those?

I only read the first book in the Keeper Trilogy so I can't speak to the quality of the other books, but in my opinion, The Veiled Threat is far, far more readable than Scott Ciencin's Hardwired.

That's not saying a lot. His book was the worst of the bunch.