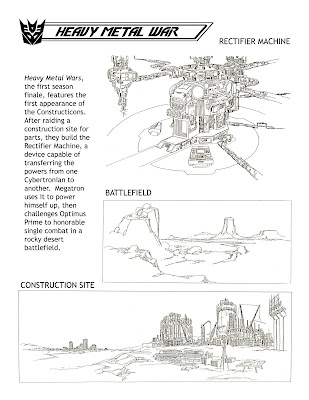 I HAVE BOTCON FEVER! This is a mildly contagious condition wherein one becomes obsessive about the upcoming Transformers convention, this year located conveniently within half an hour of my abode. Last night I spent many hours enjoyable hanging out with M Sipher, Trent Troop, Monzo & Derrick Wyatt and showing the out-of-towners a teeny tiny bit of Los Angeles. Good times!

In any event, since Iván was kind enough to draw some awesome Heavy Metal Wars artwork, I figured I'd do an Ark Addendum for that episode. To me, the real stand-out model here is the Rectifer Machine, able to give Megatron the powers of all the other Decepticons. Watching him trounce Optimus Prime with flashes of light, cluster bombs, teleportation, sonic booms and earthquakes was pretty bitchin'!

Let's see ... waiting final approval on The AllSpark Almanac, so hopefully that's finally officially done very soon. Built a new index for the combined Ark volumes, to make everything easy to find. Generally, very full of Transformers love this week!
Posted by Jimtron at 8:42 AM

The Rectifer Machine is awesome, it reminds me of something Jack Kirby would have drawn. I can only imagine the animators looking at the model sheet for that & realizing they had to draw it at several angles- they definitely earned their paychecks.