The Ark Addendum - Save the Little Girl! 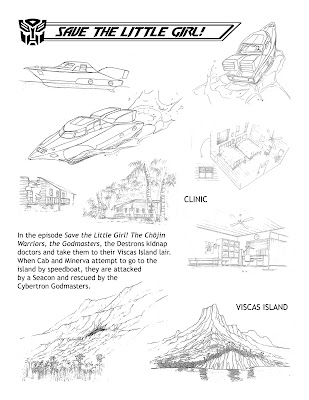 I sent Hasbro some late revisions requested for The AllSpark Almanac - with luck, they'll like them and that project will be finally put to bed. In the meantime, work on The Complete Ark chugs along nicely. I should be done in a week or two, probably before BOTCON.

Oh, and how I'm looking forward to BOTCON. Though I've been to BOTCON every year since 1997, and have spoken on panels since 2007, this is the first time I'm listed in advance as a legitimate, bona-fide guest. There are 16 of my fellow IDW creators coming, so I'm not exactly sure what the panel situation will be like, but I expect to speak at at least one of them to answer questions about either of my upcoming books. I really hope to see as many of my readers as possible. Please, come up to me and introduce yourself, even if it's just to tell me how much I suck for not tracking down the fembots.

Anyway, this week's edition of The Ark Addendum is Save the Little Girl!, the 21st episode of Masterforce. I actually had some of the character designs for this episode show up in The Ark II, but I had even more that didn't make it in. Here we see the Destron base exterior, a clinic that the Destrons attack, and the boat that Cab and Minerva use to get to the island. Of the three of them, I think the boat is the neatest. I hope you enjoy!
Posted by Jimtron at 9:13 AM

Email ThisBlogThis!Share to TwitterShare to FacebookShare to Pinterest
Labels: ark addendum, masterforce, save the little girl

I'd be more likely to tell you how much you sucked if you DID track down the fembots.

OK. No, I wouldn't. Hope to catch you there!