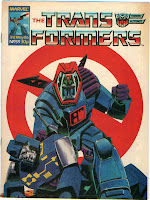 Transformers UK 51 - 58 reprinted the US issues 13 - 16, so 59 is the next one to feature a UK originated story: “Robot Buster” Part 1. The script was written, as ever, by Simon Furman although the idea for the story is attributed to the artist, Barry Kitson. The colours were by newcomer, Josie Firmin, the letters by Annie Halfacree and the editing was handled by Ian Rimmer. The cover was by Geoff Senior and is, therefore, pretty good.

It depicts a very pained looking Frenzy (he’s blue, after all) trying to push himself up from the ground. A new robotic figure stands over him, Buster’s battle armour! In all it’s clashingly-coloured glory! The tiny figure of Buster can be seen in a glass bubble of the head section, and the suit looks powerful enough to have given Frenzy a kicking. Slightly disappointing is some kind of red warning circle is situated behind the characters in lieu of a proper background, but at least this emphasises the two figures themselves. Senior always gets a lot of expression into his Transformer faces, and although Buster’s suit doesn’t have a face, Frenzy’s anguished expression is brilliantly depicted. The suit is not exactly the same model as the one drawn by Kitson in the actual story pages, and Kitson’s probably makes a bit more sense from a scale perspective. No matter, Senior’s is still a great piece of artwork, that somehow manages to convey a serious desire to smash Frenzy to bits, despite not having a conventional way of expressing this.

The story cheats a little with it’s opening. We begin “in media res” with Optimus Prime hurtling down an Ark corridor as fast as his legs will carry him. “He is annoyed” we are told, and “curious”. It emerges that he is annoyed because he has received a message from Wheeljack and Ratchet to come and see something they have built when Prime thought they were working on other projects (including repairing the Autobots damaged in the Dinobot Hunt - continuity is awesome). Now, I can see that Prime will be a little ticked off by this, but his pose suggests a lot more drama than “he is curious” - and he should be used to having his orders interpreted a little “loosely” by now.

No matter, simultaneously to Prime’s over-reaction, we see Wheeljack and Ratchet discussing what they have built, they are clearly very pleased with themselves. Ratchet says “Are you ok in there?” and we see a purple hand, but we do not yet know who it belongs to.

Prime arrives, and is just warning Ratchet and Wheeljack that they better not be wasting their talents and his time (he really is quite angry in this issue) when he catches sight of their invention. “By the Argon Nebula!” he yells in surprise - in the middle of the laboratory stands a blue, red and purple (seriously, why?) robotic figure, but instead of a head, it has a glass bubble containing controls and a very happy Buster Witwicky. He says that he is reporting for duty. joking about taking on Starscream or Shockwave. Wheeljack, perhaps sensing that Prime won’t be as thrilled as Buster is, back-pedals a little for him, suggesting that the suit will be useful in the event of a Decepticon attack.

Optimus Prime, however, is less than impressed. “Have you all lost your minds?!” he rages, incredulously. Telling the Autobots that he can excuse Buster on the grounds of youth and inexperience but that they should know better, and that the suit needs to be destroyed, despite Wheeljack and Ratchet’s quite reasonable (to this reviewer at least) protestations that Buster is often in danger suit or no suit, and this might just help him when the time comes. Buster points out that Prime owes him, given that without him, the creation matrix wou

ld have been lost and the war with it and then tells Prime that if he won’t let him fight with the Autobots then... he stinks... which is a fairly lame way to end quite a logical tirade. Wheeljack and Ratchet recoil in horror at this insult (hilariously well drawn art at this point), but it seems to calm Prime down a little. He looks regretful (good expression work here from Kitson given that Prime doesn’t give an artist much to work with) and apologises to Buster, but says that the suit must still be destroyed.

After he leaves, Buster is still angry, and half-heartedly tries to ask Wheeljack and Ratchet to disobey orders, which they say they can’t do, although they do then agree to put off the dismantling until the next day. This is, of course, significant.

Later, Buster is angrily reclining (trust me, it makes sense) in a room that the script points out was especially prepared for him. It has a bed and a bookcase, and judging by the shadows, is basically the same size as a normal Earth bedroom, it definitely has a human sized door, so I have absolutely no idea what the Autobots used to use it for, before they had a human pet. This time, however, Buster is angry at himself for mouthing off and alienating the other Autobots, although from what we have seen, they really haven’t taken anything he has said personally. In order to put thin

gs right, Buster hits upon a plan! It’s quite an obvious plan - he is going to take the suit without permission, use it to do something useful against the Decepticons and thus prove his value to the Autobot cause. This is the sort of plan that unappreciated Autobots come up with all the time, and it always ends up with someone “learning a valuable lessson™” - in this case it will probably be Buster, and maybe, if there’s time, Optimus Prime, for being such a grouch. As Buster sneaks from his room, an absolutely colossal Autobot walks by - we only see his foot, but whoever he is, he’s massive. The human enters repair bay 2 and finds the suit...

Meanwhile, at the abandoned Decepticon fortress, Frenzy is carrying a lot of equipment and complaining. He is talking to a mysterious Decepticon, but the Decepticon’s hand is purple and he talks about logic, so it’s Shockwave. From a continuity perspective, it’s a little odd that Shockwave is in charge of Frenzy here, because in the US books it would appear that Megatron had control of most of the Decepticons at just about this point, but the Decepticons have been rather scattered, so it might just be nebulous enough to handwave away. Frenzy is very irritated that he has to hump this equipment for Shockwave, correctly determining that Shockwave’s actions derive from a fear of Megatron, rather than the logic that he claims.

As Frenzy grumbles, Buster looks on from a nearby outcrop. It turns out that the suit has limited flight capability that was able to bring him to the Decepticon fortress in record time. Buster has at least been fairly smart here, reasoning that as the base is abandoned, he might find something useful to take to Prime without putting himself in much danger. Circumstances (as well as narrative convention) are unfortunately against him. He spots Frenzy moving about and after the initial rush of fear, decides that this is the perfect opportunity to take a Decepticon prisoner!

Using the suit’s built in weaponry he shoots Frenzy square in the back, knockin

g him flat on his face. Buster’s hubris is short-lived, as Frenzy begins to get up, his eyes smouldering with rage at being bested by a mere human. He unleashes his trademark sonic energy, overloading the suit’s audio sensors, and nearly making Buster black out, as the suit staggers and falls. Buster manages to push a button at random, and activates a suit function that reflects Frenzy’s sonic attack back on himself, causing the Decepticon to shut down. Despite his victory, Buster decides that since it took an accident for him to defeat one of the least powerful Decepticons, it is probably time for him to quit. Unfortunately Shockwave appears behind him and has other ideas!

This was not an Earth-shattering issue, but I did enjoy it quite a lot. Optimus Prime has always been portrayed as something of a worrywart in the comics but he does take it to extremes here, although given recent events, and the tendency of his Autobots to go off-mission and get themselves seriously injured, his demeano

ur is somewhat understandable. Buster’s characterisation is very solid. It makes perfect sense that, after all he has been through, he would want to be able to fight the Decepticons directly, and it is natural that Wheeljack and Ratchet would want to help him, as they are both helpful Autobots, who enjoy an experiment. The story set-up is not exactly original. A character going against orders in order to prove himself is one of the classic set-ups for a Transformers story, and probably has a lot to do with why Prime is so anguished all the time. Furman’s writing is as deft as ever, although I still say the beginning is a cheat - look at Prime go! Running about in his own spaceship - hardly dignified. Special mention has to go to his description of the abandoned Decepticon fortress: “Like some gaunt, sinister, spectre, it paints itself black against the night sky... a lasting testament to the warped genius of it’s creator... Megatron!” That is absolutely classic Furman, and really ensures that Megatron’s presence looms large in a story that does not feature him at all.

Kitson’s artwork continues to be solid. There are no brilliant standout pieces, but he tells a story well and ensures that everyone remains more or less on-model. The slightly smaller scale of Buster’s suit as compared to the front cover makes more sense, as well, given that the puniness of humans is often exaggerated in these

comics. As is often the case in these UK comics, Kitson’s grasp of human facial features is especially impressive, his Buster looks very lifelike. The colouring is decent as well - standard for the UK. There are no mistakes and care appears to have been taken over the detail, although the suit really is an abomination that Buster should probably be ashamed to have been seen out in.

Not the greatest issue ever, but the ending with Shockwave is certainly promising, and seeing how Buster deals with that most logical of Decepticons will be worth the price of admission to Part 2. Available from Amazon as a part of the Titan book Transformers: Second Generation.
Posted by Bishbot at 1:53 AM

Not to be picky about something as trivial as scale (at least where Transformers are concerned), but Buster & his suit are too small on the cover (maybe in the interior art also, I can't tell). Frenzy & Rumble were considered to be human sized at least by the animation models.

I also wondered if maybe this issue is what inspired the Exo-suit, but it looks like the comic came out too late for that. The movie release was about four months later.

Speaking of scale errors, next issue features Shockwave with a GIGANTIC HEAD.

I suppose I would say that Frenzy is too big, on the cover, rather than Buster is too small, because in my head Transformers can mass-shift and humans can't :) but it's all just semantics - the scale thing is awful and always has been.

I too remember how that vulgar insult, "Then...you stink, Prime!" was taken so horrifically by Wheeljack and Ratchet like they thought Optimus might REALLY lose it! Even back then, i thought that was a bit much! But i loved it!