The Ark Addendum - Building the Victory 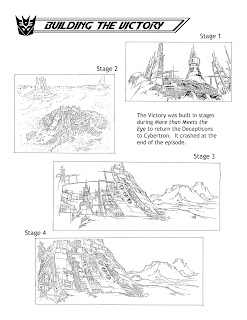 A few months ago, I posted most of the models I had from More than Meets the Eye, the pilot episode of The Transformers.  The exception was these four models, showcasing the construction of the at-the-time unnamed Decepticon space cruiser.  [I wound up giving that ship the name The Victory, based on an interview I conducted with one of the original designers while compiling  Transformers: The Complete Ark

I rather like the level of detail as the ship rises from the mesas of the American west.  It's kind of funny, this is one of those episodes that showcases how proactive the Decepticons were and how reactive the Autobots were.  'Cons build a ship to get home, 'Bots play catch-up, trying to thwart their energy-gathering activities.  Another, similar episode was A Decepticon Raider in King Arthur's Court.  The Autobots pal around with the locals and slowly run out of energon, the Decepticons build a dynamo and make themselves gunpowder.  That episode literally required magic to give the good guys their requisite victory.  MtMtE, at least, relied on established character abilities to save the day.
Posted by Jimtron at 8:24 AM

Stage 2 kinda resembles the Decepticon base from The Headmasters. :)

BTW, are there any designs for Marvel issue 1 commercial available? Would be awesome to see what the storyboarded Decepticon mountain base looked like. :D