Headhunt Part 2 was written by Simon Furman, drawn by Geoff Senior, coloured by Steve White and lettered by Richard Starkings. 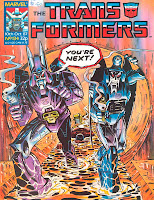 ver is by Lee Sullivan and is a lurid but fairly effective portrait of Scourge and Cyclonus. Once again, it doesn't need the speech balloon, which seems to have been some kind of misguided editorial policy but while it cannot quite match Dave Gibbons' contribution from the previous issue, it's a good illustration of where the issue begins.

Down in the utility tunnels beneath Cybertron Scourge and Cyclonus are arguing. It turns out that the explosion that ended last issue was Scourge shooting Death's Head in the back. Now Death's Head is down but Rodimus Prime has taken advantage of the confusion to escape. Scourge is adamant that he owed Death's Head after the bounty hunter critically wounded him in their last encounter and Cyclonus concedes the point, but insists they hurry after Prime, or the Decepticons will never accept them as joint leaders.

As the two stalk off down the tunnel a twitch of a mechanical gauntlet suggests that perhaps Death's Head is not as dead as the Decepticons might have assumed...

Nearby, Rodimus has a head start but is flagging badly as the wounds he took last time are taking their toll. As he tries desperately to keep going his thoughts betray the immense pressure he feels from the responsibility of leadership and the unthinkable notion that Death's Head's gun to his head might have been a blessed release. 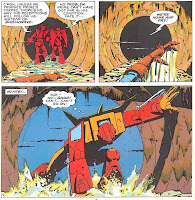 firepower. Confident that nothing could have survived their onslaught they go looking for the body, missing the fact that Rodimus has slipped through a grating beneath their feet.

When they move off he climbs back up into the tunnel, in a torrent of unsavoury looking toxic waste. Dicing with death is slowly building back Rodimus's confidence as he reaffirms to himself that the creation matrix is too great a responsibility to give up and if he cannot defeat the Decepticons they will spread their tyranny through the universe!

Determining that he needs a weapon, Rodimus heads for Death's Head's corpse, only to find it gone, with only his shield remaining! The shield has a hole right through the middle but the mechanoid's corpse is nowhere to be found.

Elsewhere, Death's Head, very much alive and well, confronts Scourge and Cyclonus. He adminishes the Decepticons for not checking that he was dead and is very angry with them for possibly costing him Shockwave's 10,000 shanix. He attacks and thr Decepticons run, which Death's Head admits he enjoys much more.

Rodimus Prime, somewhat lost, stumbles upon a large red capital A marking a tunnel wall and is struck by an idea. Scourge and Cyclonus charge past him and bundle him over, all thoughts of assasinating him gone in their panic at Death's Head's fury.

slows up, realising he can still claim his bounty as Rodimus gets back up. Rodimus hurls the bounty hunter's own shield back at him with a throw that would make Steve Rogers proud. It knocks Death's Head backwards and straight into a wall, giving the Autobot leader time to scale a ladder leading to a hatch.

While Death's Head curses him for running and gives chase, Rodimus reveals his endgame - the red A markings have lead him back to Autobase and when Death's Head pops his head out of the hatch he finds himself surrounded by Autobot blasters.

Death's Head concludes that perhaps it's time to let Rodimus Prime off but the Autobot has other ideas. He proposes a counter offer - 10,000 shanix for the heads of Scourge and Cyclonus. Death's Head is only too pleased to accept!

Part 2 zips along at a fair pace and delivers us a very enjoyable pay-off. It is with decisions like this that Furman can distance Rodimus Prime from his predecessor. Much less blinded by idealism than Optimus Prime, Rodimus has no qualms about once again hiring Death's Head to go after his enemies. Optimus would never have done business with such an individual but Rodimus takes a calculated risk that could very well pay off, given Death's Head's proven ability to cut through the stalemate situation on Cybertron.

A critic might argue that Rodimus' similar course of action with Galvatron went badly wrong when Death's Head got involved and that he is being foolhardy to use similar tactics again. However, I think that the margin for error is much lower here. As far as the Autobots know, Scourge and Cyclonus do not possess Galvatron's time-jump ability and probably will not make it far from Cybertron with Death's Head on their tails. In addition, Rodimus has paid Death's Head in advance, which means he has the bounty hunter's loyalty sewn up. There will be no repeat of Death's Head's fury at having his contract cancelled last time as if Rodimus wants to cancel it, Death's Head will get to keep the money. I also very much enjoy the way that Rodimus mocks Death's Head by using his verbal ticks when he has the better of him. Perhaps there is some Hot Rod showing through there. Certainly, this is not something that Optimus Prime would do, except maybe in the Sunbow cartoon. 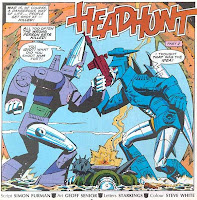 Scourge and Cyclonus suffer some serious setbacks in this issue and their bickering is always fun to read. I like the way that they never even question the fact that if one leads the Decepticons they both will. Apparently Unicron-forged Decepticons are much more loyal to one another than the regular kind, or perhaps they both recognise that they are unpopular and need the other's firepower to maintain control. Or maybe they're just in love. Who can say? That said, they never look further from achieving their goal as at the end of this issue - running ignominiously away, with a very cross bounty hunter on their trail.

With these events, Furman has established an intriguing framework for future stories set in this time-period. This is a good standalone story but with Death's Head still at large, and out for revenge, it doesn't look like the status will remain quo for very much longer.

Geoff Senior's art is marked improvement over Dan Reed's. The title page splash, with Cyclonus and Scourge arguing like an old married couple is perhaps funnier than two Unicron-forged Decepticons ought to be, but it's still a great, memorable image.

A very enjoyable two issue story that tells a fast action story while setting up events for the future. Highly recommended. Next week, however, we go back to the past to examine the story of the Dinobots' hatred of the Predacons. Stay tuned for Grudge Match!
Posted by Bishbot at 9:56 AM

I have to say I loved this cover – Cyclonus and Scourge look properly menacing in the sinister light. I remember the promo for this in the UK comic just featured a close-up of Cyclonus’ face with the caption “And a smile on the face of the tiger!” – it was mouth-watering for next week’s issue.

A great story too, a really good chemistry of personalities and motives down in the sewers.

I thought it was cute that Furman used “10,000 Shanix” as the default ‘big sum of money’ for every job Death’s Head accepted. Shades of Dr Evil’s “One million dollars” there.

Oh, thanks Chuffer. Now I've got the image of Megatron sticking his pinky in the side of his mouth and saying, "Ten THOUSAND shanix!"