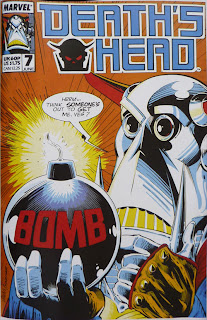 Quite the changed line-up for Issue 7: Bryan Hitch returns as penciller; we get Jeff Anderson as inker and Stuart Place as colourist; even the editor, Steve White, is new. The only constants are Annie H on letters and, of course, Simon Furman as writer.

The cover is another by Bryan Hitch and Mark Farmer: a close-up of Death’s Head examining a fizzing bomb. “Hrrm…” he wonders, “think someone’s out to get me, yes?”. It’s appropriately deadpan, and the bomb itself is a cartoon-style sphere with a hissing fuse (and ‘BOMB’ written on it, for good measure). It’s a nice enough gag, and certainly in keeping for what’s to follow.

The story starts with a bang. Death’s Head’s newly-constructed spacecraft has just launched from Los Angeles Spaceport, only to be rocked by two simultaneous explosions . Blaming shoddy workmanship, Death’s Head struggles to regain control of his plummeting vehicle. It appears that the second explosion lightened the load enough to counter the damage of the first and he pulls up in time to avoid a crash. All this is observed by the diminutive bounty hunter Short Fuse, who was responsible for one of the explosions and is forced to flee as Death’s Head comes into land – upside down and with his landing gear in the air – right on top of his car.

Watching from the rooftops overhead is Big Shot, a second bounty hunter whose energy blast caused the other explosion (as a complaint, this is not that clear from the artwork, since we never see him make the shot, and could easily assume both detonations were Short Fuse’s work). He swears his next attack will finish Death’s Head.

Later that night, both bounty hunters are reporting to their respective employers (who helpfully recap the plot that has been unfolding over the epilogues of the last few issues). The Undertaker wants Death’s Head killed as punishment for killing his attack beast – Big Shot is already calculating that, once successful, he will also gain Death’s Head’s clients. Meanwhile, the equine Dead Cert wants to deny his business rival this face-saving revenge by killing Death’s Head first – Short Fuse guarantees success, then cheekily asks to borrow a car.

The plot thickens further at the local television studios. A car bursts in and the driver murders a security guard. Introducing himself as ‘Photofit’, he assumes the guard’s face and, with flash of light from his outfit, duplicates his uniform.

Death’s Head and Spratt arrive moments later, in the middle of a case to hunt down Photofit. Oblivious of the “Run to Rio” gameshow poster right behind him, Death’s Head wonders how Photofit plans to escape. They agree to split up – Spratt to search the studio and Death’s Head to fetch an identification device from the office.

Death’s Head returns to his car, as Big Shot lies in wait. The car explodes (Short Fuse’s work once again) and knocks Death’s Head to the ground, once more avoiding Big Shot’s blast. Both Big Shot and Short Fuse curse their bad luck, and Death Head’s finally gets suspicious: “Another explosion, eh? Well, you know what they say, once is happenstance, twice is coincidence … three times is enemy action, yes,?”(which strikes me a fairly high-tolerance attitude to explosions). 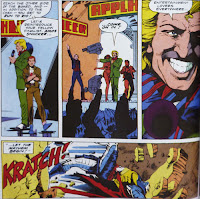 Searching the TV studios, Spratt discovers another dead body – a bespectacled man in a purple suit. He deduces that it must be Photofit’s latest victim, and therefore he now knows what his quarry will look like. He dashes off, and inadvertently gets on the set of ‘Run for Rio’, where he is mistaken for a contestant. The host forces him to take part, and introduces his opponent – Amos Snucker, a bespectacled man in a purple suit. “Entertainment lovers everywhere … let the mayhem begin!”

Elsewhere, Death’s Head is smashed through a wall as Big Shot dispenses with subtlety. He is about to deliver another blast when a bomb explodes behind him, taking him off balance. Rather than angry or afraid, Death’s Head seems mildly interested to meet a fellow bounty hunter, and the two set about brawling. Also getting impatient is Short Fuse, who prepares a magnetic bomb, then accidently drops it on his belt buckle. Death’s Head and Big Shot are still trading punches as an exploding belt is lobbed in their direction.

Back to the gameshow, Photofit has just been penalty-slimed and Spratt is one question away from the jackpot. Photofit discretely puts a gun against Spratt’s back, warning him to start getting questions wrong, when Death’s Head and Big Shot burst through the wall. Spratt exposes Photofit, though Death’s Head currently has his hands full.

Photofit flees, swearing vengeance, and immediately takes on the appearance of Death’s Head, in order to catch Spratt unawares. Unfortunately he is discovered by an angry Short Fuse, who has another bomb ready for him. Photofit panics and tries to reveal his true identity, but the flash of light causes Short Fuse to drop the bomb. The explosion kills both Photofit and Short Fuse, and also knocks Big Shot through the outside wall and crashing to the ground, fifty feet below.

Still oblivious that there was ever a second bounty hunter setting off explosions, and totally unaware of Big Shot’s motivation, Death’s Head and Spratt set off to collect up the pieces of Photofit. And in a rain-soaked alley, a bloodied and battered Big Shot limps away into the night, uttering the immortal threat to Death’s Head that, “Now it’s personal!”

‘Let the mayhem begin’ indeed, for this one throws everything into the blender. Like the previous issue, it’s a fast-paced, entertaining romp that doesn’t stand up to close scrutiny. However, unlike Sudden Impact, which struggled to stretch out the plot, Shot By Both Sides is straining at the seams with its numerous story threads. 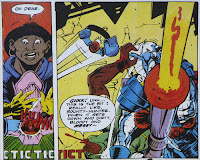 Bringing in rival bounty hunters is a welcome idea that’s been simmering for a while. As characters, there is a nice juxtaposition between Big Shot and Short Fuse, not only by name and stature, but also their methods. Big Shot is blunt and direct – showing a mercenary streak in his eagerness to harvest Death’s Head’s clients ; Short Fuse is tricksy and subtle – so much so that no-one realises he was actually involved in the three-way contest. I liked how his frustrations escalated throughout the story, from ‘oh bother’ and ‘oh dear’ to such murderous aggression he abandons all caution (a ‘short-fuse’ temper, perhaps). Neither bounty hunter is staggeringly competent, which adds to the fun, but both are deadly enough to provide a real threat.

Of the pair, I prefer Big Shot as an antagonist, so it’s good that he was the one to (barely) survive. He is big and tough enough to go toe-to-toe with Death’s Head (absorbing a convincing amount of punishment – no repetition of Ogrus here). His repeated failures drive him towards utter fury, making a great contrast to the mechanoid’s cool detachment. “I’ll carve my name on your hide, Death’s Head!” “Sigh…”

As for their target, Death’s Head does comparatively little in the story. It was a sound narrative decision to have him in the middle of a proper case when all this happens, so he has a goal beyond mere survival. That said, most of the investigating work was done by Spratt, so all Death’s Head gets to do is trade a few punches with Big Shot, and try out his new spacecraft (‘DHII’ is the same design as the one from Transformers – nice continuity – although mid-case seems a strange time to be going for a test-flight).

Regardless of the motives (I found Dead Cert’s plan to foil his rival a little tenuous – if Death’s Head was killed, couldn’t The Undertaker just claim credit for it anyway?), I love the idea of two bounty hunters competing to kill Death’s Head, especially when their efforts serve to cancel each other out.

While this makes for a great comedy of errors, I would suggest it was a missed opportunity not to force Death’s Head to figure out he was being stalked, work out a plan for survival, and untimely turn the tables on the two ganglords. With so much story being seeded beforehand, in the classic Furman style, this had potential to be at least a two-parter. Perhaps a longer payoff was the original plan, but as the series was already nearing its end (the final three issues are guest-starring stories that seem to be marketing-driven), maybe this arc was forced to a premature end.

Bryan Hitch’s return to pencilling duties is a welcome one. There’s a lot of imagination and detail in his scenery, and the multiple bounty hunters are well-rendered (although Spratt seems to have lost a couple of years). There are also some fantastic action shots, particularly the fistfight between Death’s Head and Big Shot. Leaping from explosions and crashing through walls, the two bounty hunters hurl themselves at each other like gladiators – it’s a real treat, and indicates what job Hitch might have done on Sudden Impact slugfest.

There’s a lot of noise in this story, so we get to see some great work by letterer Annie H (the only creative to work on the entire series), providing a superb range of madcap and artistic sound effects.

Next week: Death’s Head gets his chance for payback on Doctor Who in “Time Bomb”.

This was one of my favorite Death's Head stories. I love the mix of action and comedy, and Big Shot is a legitimately cool antagonist for Death's Head to fight.