More unintentional hilarity!  Once again, I cheat, because I draw from a comedy show.  Nevertheless, this line is delivered with such sincerity that it cracks me up every time, disproportionately to the humor of the understated gag.
You see, in Mystery Science Theater 3000 (or MST3K for short), Mike Nelson is stuck up on a satellite and forced to watch bad movies.  By the end of the run, he's kept up there by Pearl Forrester.  What with him being her captive, he's got to depend on her for everything, but the sad fact of his existence is that she doesn't give a nanobot's exhaust about him.  Still, she's pretty much his only lifeline, so when something goes wrong in seasons 8-10, his first and pretty much only recourse is to contact her.  It's a running gag; here is the very last example from the series.  Appropriately enough, it's from the series finale.

"I'll call Pearl," delivered in a calm voice, has definitely entered my lexicon for when I begin to undertake some Quixotic course of action doomed for failure but which I am nevertheless compelled to pursue.  Thanks for sharing!  Oh, and if you remember a specific example of this phoenomena from other episodes, let me know and maybe I'll make a compilation video.


I loved me some MST3K.  When I lived in Japan, my folks would get VHS tapes and put three episodes each on there and mail them out every couple of months, along with some other stuff you can't get in Japan.  (For example, root beer is not something the Japanese like.  They think it tastes like medicine.)   I have fond memories of cracking open the care package and seeing what foods, what movies, what music was present.  (Ah, the days before broadband.)

This, the final episode, which I first saw in Okayama in 1999, reminds me of how sad I was when they went off the air.  That sadness was enhanced, a bit, by what they chose to do with the characters.  While Pearl, Brain Guy (the Observer), BoBo, and Gypsy all moved on with their lives, Mike, Crow, and Tom Servo moved in together and... watched old movies.  I get what they were going for, and it's pretty amusing to have them end the episode by watching something on TV that they'd already MSTed, but that inability to move on struck me as oddly tragic.  Maybe they wanted to show that, for all their protests, the lifestyle forced on them by the Forresters was what they would have chosen anyway.  Or maybe I'm just too sensitive. 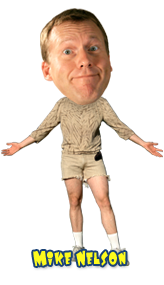 But outside of the text, I was pretty sad just to see the show go off the air.  (I realize that this also might have colored my interpretation of the events surrounding Mike & the gang's return to Earth.)  It seemed like the kind of concept that could go on forever.  That's why I was so happy that the gang founded RiffTrax, where they make their own downloadable audio commentary.  True, we don't get the host segments, which were the best part.  Still, they're like the dessert; the meal of the show was the three dudes making fun of the movie.  Also, since it's just audio commentary, they can tackle high-profile movies, like Transformers or The Kingdom of the Crystal Skull. They're well worth checking out.
Posted by Jimtron at 8:10 AM