During the brief run of the Death’s Head series, it was advertised across Marvel’s other titles with a one-page comic strip. This was reprinted in the second volume of collected works, so in the interests of completeness, I’m giving it a quick glance.
The piece has no credits, although I’d say Simon Furman and Bryan Hitch did the writing and art respectively. We begin on the planet Godliux. Death’s Head and Spratt are side-by-side, blasting away and under heavy fire from an unseen source.
Spratt is complaining about the nature of their work, and that Death’s Head, as a ‘freelance peacekeeping agent’ (ahem, ‘bounty hunter’) should have found them something better. Death’s Head replies that he doesn’t care who his clients are, and for the right money he’ll kill anyone.
“Yeah, but really…” Spratt says as the scene opens up to reveal their opponents are a bunch of knee-high marauders, “…wiping out invading Munchkyns?” 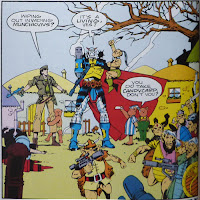 Their employers are also in view: little teddy bear people who offer to pay with ‘candycard’. Death’s Head sighs, “It’s a living, yes?”
It’s a funny little story, and certainly sets out the stall for the Death Head’s series: a blend of action and comedy. Death’s Head gets to display his ruthless, businesslike personality – only to have it sweetly undercut by the final panel. Even in full heroic stance – gun smoking, cape flying – the mechanoid looks like he’s swallowing a lot of embarrassment.
The artwork is well done: solid action scenes for the set-up panels, with some good pathos in the last panel. Particularly funny are the inhabitants of Godliux, who look adorable in their little bow ties (one is even clinging to Spratt’s leg for protection).
Though necessary for the joke, it’s interesting that Death’s Head and Spratt are off-planet for this job – something that never happened in the series. With his spacecraft rebuilt, there’s no reason they have to stay in Los Angeles, and I think planet-hopping adventures would have been fun to read. (I also think there would have been great comedic potential in a whole issue of Death’s Head versus the Munchkyns.)
The Munchkyn one-page advert was republished ‘Death’s Head Volume 2’
Posted by Chuffer at 12:39 PM